Many went to the show for the popular performers, not the election politics. 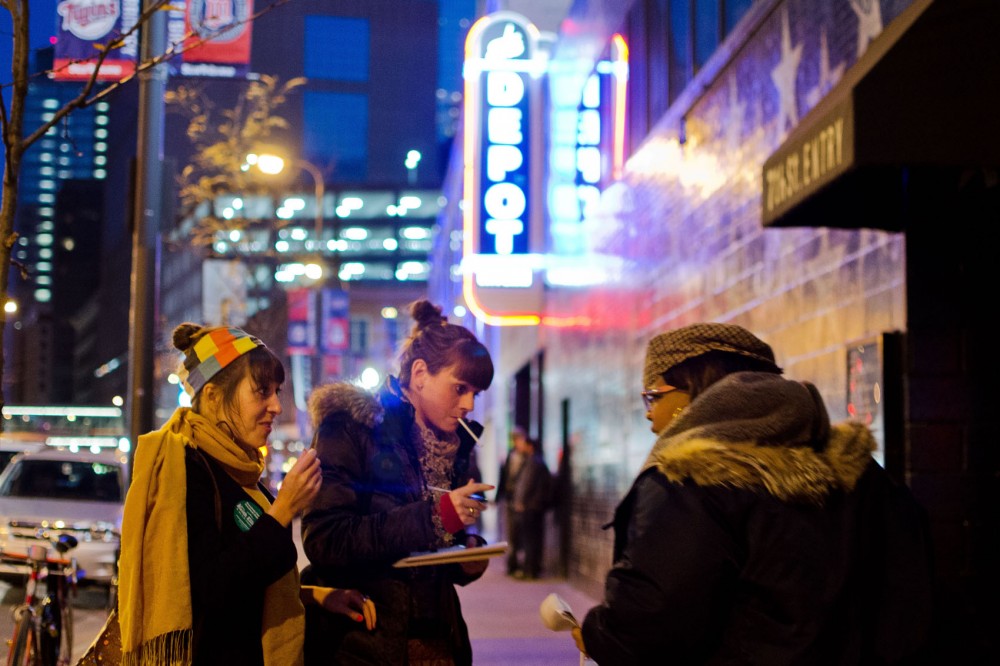 Event worker Artiste Mayfield encourages Leah Caspers and Lindsay Johnson to vote for U.S. Representative Keith Ellison against the voter ID and marriage amendments Sunday night outside of the #GetOutToVoteMN concert at First Avenue. The Ellison campaign hosted the the concert to encourage young people to go to the polls in November.

“If we ever needed help from young people to turn the vote out, we need it now,” Ellison said. “Young people are a fundamental and key group in determining the outcome of this election.”

Eleven hip-hop artists, including Slug of Atmosphere and Brother Ali, performed on the main stage for the concert at First Avenue in downtown Minneapolis.

“This is right before the election, so it’s a last-minute opportunity to get people fired up and ready to go,” said David Leonard, organizing director for Ellison’s campaign.

Leonard said Ellison’s campaign often works with local artists, which he said is a good way to get people interested.

“Music brings folks together,” he said, “especially young voters who might be slightly engaged in the political process, but not be completely aware of their stake in the election.”

Though the concert was promoted as a political event, many attendees said the entertainers, not the sponsors, brought them to First Avenue.

Clothed in Atmosphere apparel, fans Emilie Hennemann and Cassey Carney stood in line hours before the concert started to snag a spot in the front row.

“I’m coming for the music,” Hennemann said. “I don’t feel like getting into politics.”

Both long-time Atmosphere fans, the girls agreed this event is something their favorite hip-hop performers would get involved in.

“Brother Ali has really been outspoken about his political views in the past, so it doesn’t surprise me he is doing this,” Carney said.

Other concert-goers agreed. Lakeville native John Walker Jr. said he thinks “the concert is a good idea to encourage young people to get politically involved,” but he was definitely there for the music.

Ellison and his staff greeted people and provided them with information about the campaign as they entered the venue.

“Students — young people — get an opportunity to speak to an actual elected official, a congressman,” Leonard said. “Chat with him, get excited and get involved.”

In addition to the concert, Ellison has visited campus other times, like to door-knock at college dorms to try to win over student voters.

In the University of Minnesota area, voters have overwhelmingly voted for Ellison the past three elections.

The concert sparked policy dialogue before the show itself.

Leonard and other campaign organizers registered people to vote and spoke about the election when tickets went on sale for the concert Oct. 15 at Fifth Element in Uptown.

There was a line of people at the door waiting for the 5 p.m. ticket-release time, he said.

“There were some folks specifically who came because of the concert tickets,” Leonard said. “And then there were people who weren’t actually buying tickets and were just in the store at the time and got registered to vote.”

Leonard said Sunday’s event was a combination of entertainment and political activism.

“We got a good mix of folks here who looked at this event as an opportunity to talk about the amendments and getting involved in the electoral process,” Leonard said, “and people who were just really excited about the lineup.”