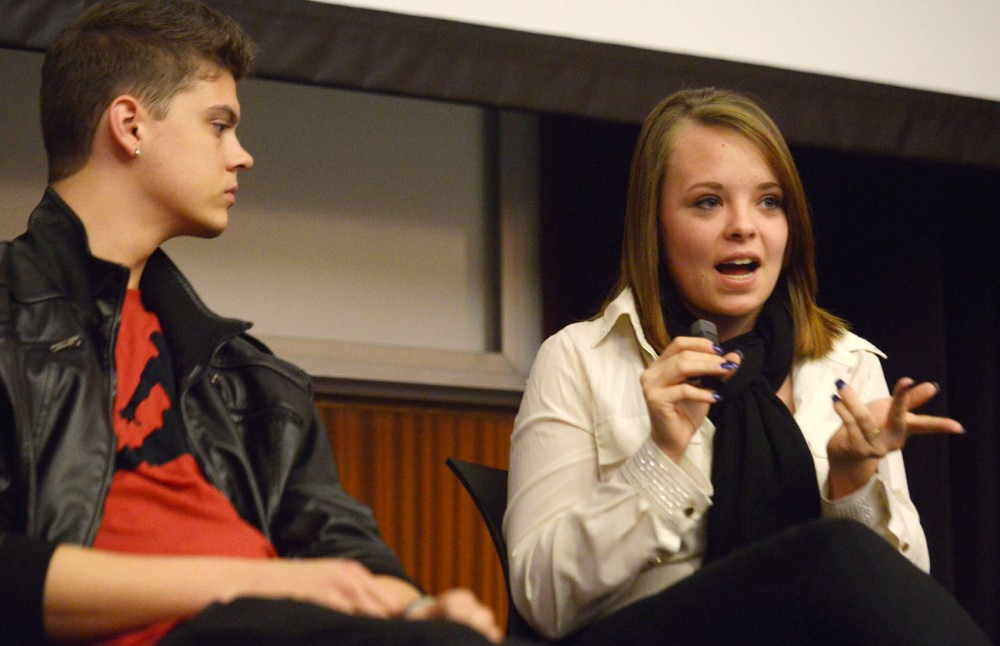 "Teen Mom" stars Tyler Baltierra and Catelynn Lowell visit the University to speak about their experience with adoption on Wednesday, April 17, 2013, at the Bell Museum.

University of Minnesota students got a taste of reality Wednesday — reality TV stars, that is.

An overwhelmingly female audience gathered in the Bell Museum of Natural History Auditorium on Wednesday night to hear the couple speak.

Only about 2.3 percent of surveyed students from 10 Minnesota higher education institutions had unplanned pregnancies in the year before the survey. Of those, less than 1 percent resulted in adoption.

“I wish that number was a lot higher,” said Nathan Hastings, a member of Students for Human Life. He said he hoped people will learn more about adoption and feel more comfortable pursuing it through the event.

While nearly 40 percent of the unplanned pregnancies resulted in birth and parenting, 17 percent resulted in abortion. A quarter of respondents were still pregnant at the time of the survey.

Open adoption, which Fletcher said Bethany promotes, means birth parents are able to stay in contact with their adopted children and be involved in their lives, removing some of the secrecy that has traditionally surrounded adoption.

When MTV sent out a mass email to adoption agencies looking for a 16-year-old in her third trimester, Lowell said her and Baltierra’s situation fit the bill.

Lowell said she decided to go on the show and continues to go on tours like these to demonstrate what adoption looks like in the present day.

“We’re not just crazy birth moms who hide in bushes trying to steal our children back,” she said. “If I change some lives, that’s all that matters.”

Lowell and Baltierra, who are now 21 and have been together almost nine years, said women who have unplanned pregnancies should get involved with an adoption agency, even if they aren’t choosing adoption. Agencies can provide resources like counseling and safe-sleep classes, Lowell said.

Bethany, the largest adoption agency in the nation, is sponsoring Baltierra and Lowell’s April tour. Besides the University, the couple visited St. Cloud State University, Fletcher said. This is their second year of tours.

“Because of their popularity,” she said, “they can get the message out that we’ve been trying to put out for a long time.”

Fletcher — who has adopted 12 children with her husband — said adoption today is different than in the past.

“Adoptive families really are prepared to have a strong relationship with the birth parents of their children,” she said. “The kids grow up just really not knowing that there’s anything that different.”