Businesses could be allowed to sell and promote goods on city sidewalks. 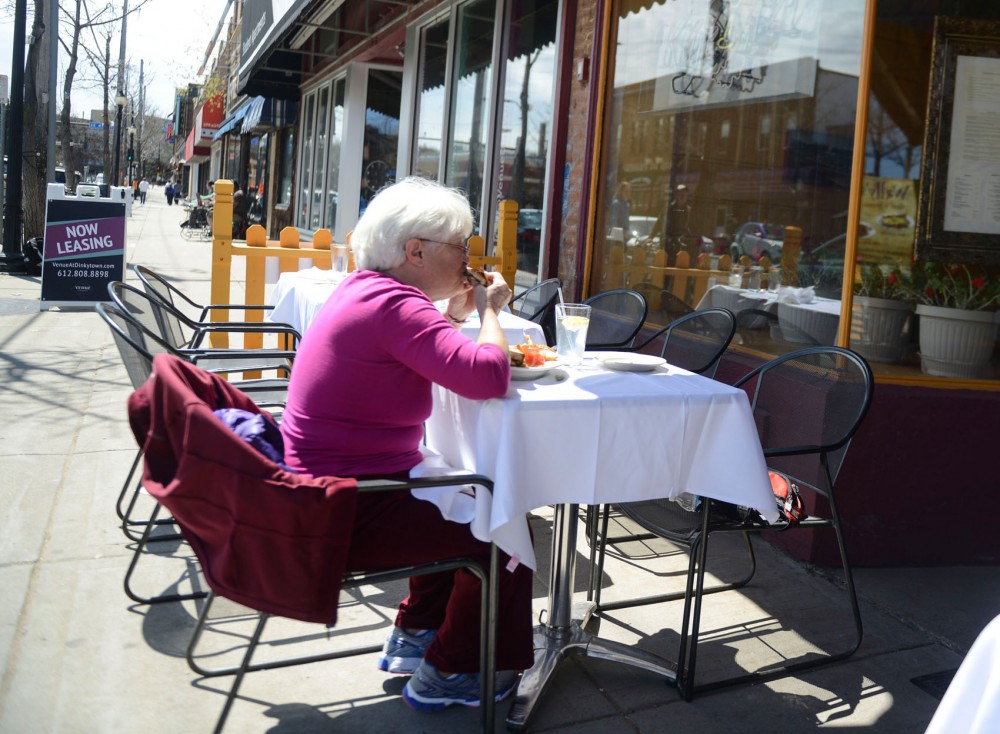 Barbara Saunders eats outside of Kafe 421 in Dinkytown on Sunday. City lawmakers are considering expanding outdoor marketing and sales for area businesses.

Hardware stores are among the few businesses allowed to peddle goods on Minneapolis sidewalks, but others across the city may soon be able to do the same.

The City Council Zoning and Planning Committee will review a policy change June 5 that would allow businesses to sell and display merchandise outside their buildings, a move that businesses around the University of Minnesota support, as long as fellow retailers follow its guidelines.

“I think if others can follow in our footsteps and put more signage out there,” she said, “it will be great as long as it doesn’t look super cluttered.”

Ward 8 City Councilwoman Elizabeth Glidden said she introduced the policy last year after hearing from businesses frustrated by restrictions on nearby pathways.

Limits on which stores were allowed to use sidewalks seemed unfair, she said, and presented a conundrum for city staff. Not many businesses are aware of the sidewalk promotion rules, she said, so this policy will set standards and make it clear for retailers what they can and cannot do.

Businesses using sidewalks to sell goods would have to leave 5 feet of unobstructed walking space. Displays could be out from 8 a.m. to 10 p.m., and promoting liquor, tobacco and sexually oriented products would be prohibited.

Commercial, downtown and light and medium industrial districts would be the only ones allowed to take advantage of the policy, keeping walkways in office and residential districts off-limits.

Glidden said she’s heard little opposition to the proposal, adding that it has received an endorsement from the Pedestrian Advisory Committee.

Ty Buckley, manager of Erik’s Bike Shop in Dinkytown, said he hopes the city approves the policy. The bike shop relies on foot traffic, he said, and the policy could allow for some new marketing strategies.

“If anything, I could see display bikes outside because when people see cool bikes, they tend to want to look at them further,” he said.

The proposal denotes a larger push from the City Council to further take advantage of Minneapolis’ outdoor space.

Glidden said she hopes the ordinance will promote outdoor activity and make the city friendlier for walkers.

“You’re not going to get that unless you’ve got a [place] for people to go outside of the business itself,” said Ward 3 Councilman Jacob Frey, who said he thinks he’ll support Glidden’s policy.

Frey said he’s working on a project to bring “pocket parks,” or “parklets,” to Minneapolis.

The tiny parks, which have already been implemented in cities such as New York and San Francisco, transform parking spaces into green spaces with trees and benches.

“We’d literally take out a couple of parking spaces in the street,” Frey said. “That’s what so funny about it. It will be a jut-out into the street.”

The space in front of Espresso Royale in Dinkytown could be ideal for a parklet, Frey said. The City Council will vote on a proposed allotment of $75,000 for the parklet project, Frey said.

Frey said he thinks the two City Council projects could work well together to “activate” space.

Glidden compared her policy to the “sidewalk cafÃ© craze.” In 2006, the city updated ordinances to allow businesses to put tables and chairs outside their establishments after paying various fees.

McCloud said KafÃ© 421 has had outdoor seating on the sidewalk for at least the last eight years. Even though the restaurant has just a few tables outside, she said, they count on that seating and customers demand it.

“It’s great. It’s very noticeable as people are walking down the sidewalk,” she said, “so they know that we’re a different entity and something to take note of versus them just walking past.”