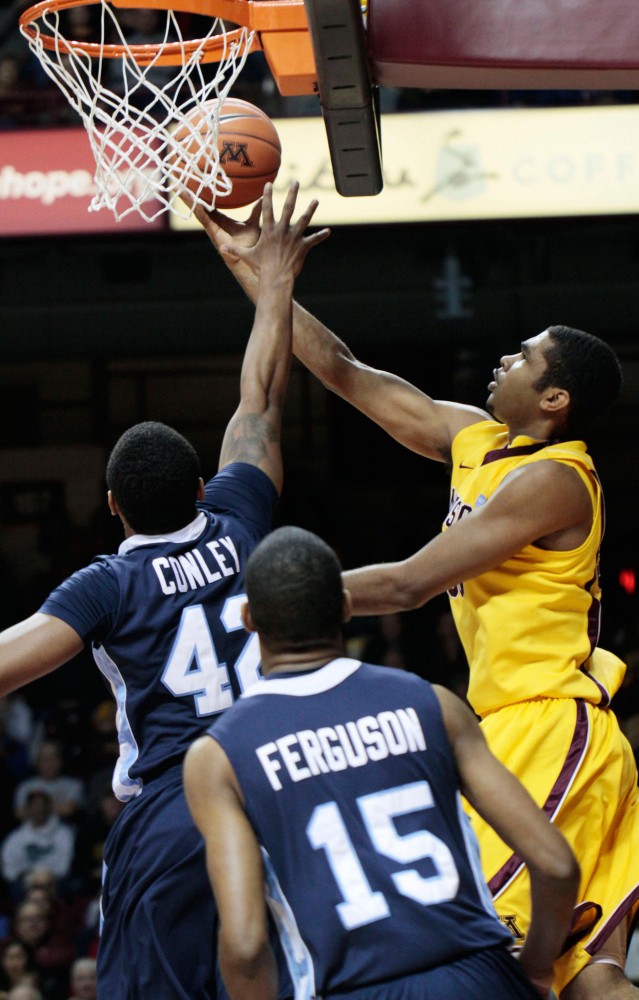 Minnesota forward Ralph Sampson III makes a reverse layup against St. Peter on Saturday at Williams Arena. Sampson had his best game of the season with 15 points, eight rebounds and four blocked shots.

It may have taken him a few weeks, but Ralph Sampson III is back in business.

It was SampsonâÄôs second game back from an ankle injury and his first game in the starting lineup since Nov. 27.

The senior is averaging just 7.5 points and 4.4 rebounds in 20.1 minutes this season, but with Trevor Mbakwe out for the season, he could become the teamâÄôs primary scorer and rebounder.

âÄúGetting Ralph back in the lineup today was a big help,âÄù head coach Tubby Smith said. âÄúIt was a real good day for him âÄ¦ But I expect him to play this well.âÄù

Sampson, who played 24 minutes in the win, said his ankle was âÄúabout 97 percentâÄù healthy after the game.

âÄúHe seems to be moving better,âÄù Smith said. âÄúI think his stamina and his wind needs to continue to get better.âÄù

Williams, who had averaged 14.7 points and 7.7 rebounds in his previous three games, had an off night with 10 points on 4-for-9 shooting. All four of his rebounds came on the offensive end.

Freshman point guard Andre Hollins, who tweaked his ankle in a Dec. 3 game against Southern California, sat out SaturdayâÄôs game. Maverick Ahanmisi started in his place and scored three points in 28 minutes.

Smith said Hollins also tweaked his ankle in TuesdayâÄôs game against Appalachian State and then again in practice Friday.

âÄúWe have had a lot of ankle problems, a lot of injuries,âÄù Smith said. âÄúSeems like we always have someone sitting out.âÄù

Welch, who started at shooting guard, added 11 points for the Gophers, but his streak of consecutive-made free throws ended at 25.

Minnesota held the Peacocks to 3-for-11 shooting from long range, one game after allowing Appalachian State to hit nine of 21 triples.

Despite some inconsistencies, the Gophers (10-1) have dominated at Williams Arena, posting an 8-0 record. They have won all but one of their home games by double digits.

Minnesota is also the first Big Ten team to win 10 games in 2011-12 and one of five teams in the conference with no more than one loss.

Two home games remain before Minnesota heads to Illinois for its first conference game and first true road game of the season.

Smith said the teamâÄôs focus heading into Big Ten play is to improve its shooting, both from the free-throw line and from beyond the arc.

The Gophers have shot 69 percent from the free-throw line and 32 percent from 3-point range since MbakweâÄôs injury, but they have continued to control the paint without their star forward.