The City Council will vote Friday to approve a grant for $102,237 to help fund the program through 2013. 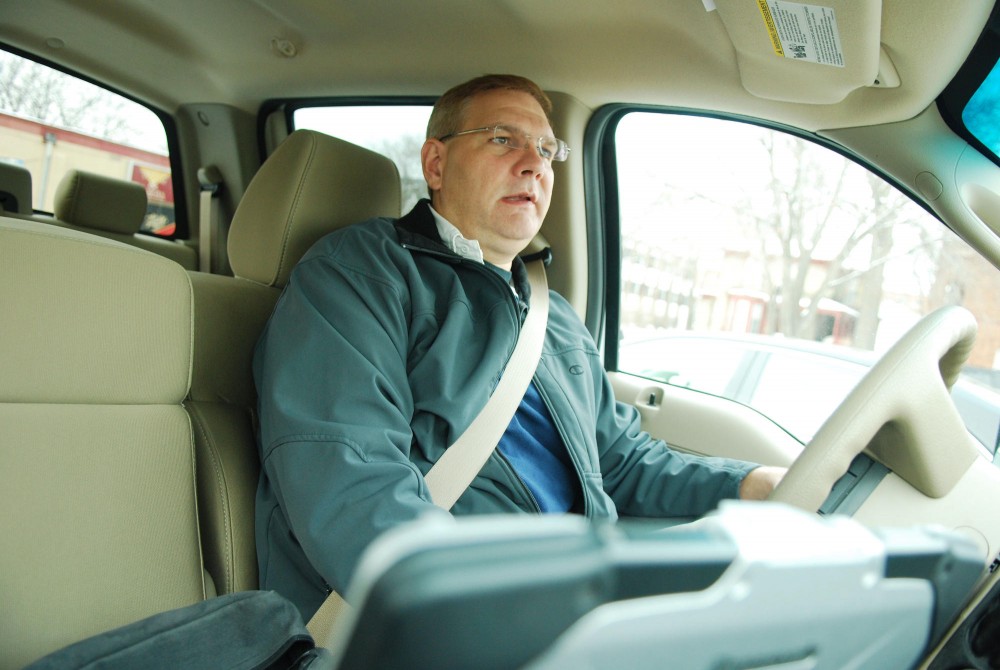 Officer Wayne Johnson explains the concept of a bait car while on duty Monday in Minneapolis.

In late June, three people stole a vehicle parked on 26th Avenue Northeast. Within five minutes, several Minneapolis police officers pulled them over and, with guns drawn, ordered the driver out of the vehicle.

The trio didnâÄôt know it, but the stolen vehicle was one of the Minneapolis Police DepartmentâÄôs bait vehicles âÄî equipped with GPS as well as video and audio recording devices to catch car thieves in the act.

When the Auto Theft Prevention Program was created 13 years ago, it was one of the first in the country to use bait vehicles. The Minneapolis City Council will vote Friday to approve a grant from the Minnesota Department of Commerce for $102,237 that will help to fund the program through 2013.

Officer Wayne Johnson, who heads the program, said it has been a success. Minneapolis police have convicted roughly 400 people who tried to steal a bait car, and auto theft has been reduced by 66 percent since December 1997 when the program began.

âÄúOther [serious] crime has dropped over the last 13 years, but nothing in the 50âÄôs and 60âÄôs [percent range] âÄ¦ nothing as much as auto theft,âÄù Johnson said.

As of Nov. 28, more than 1,600 incidents of auto theft had been reported throughout the city, according to Minneapolis police data. Police made 135 related arrests in that time period.

The bait cars are just one part of the Auto Theft Prevention Program, which also educates the public on theft prevention techniques and distributes âÄúClubsâÄù to lock steering wheels.

In addition to surveillance âÄî Johnson can see inside the vehicles from his cellphone âÄîthe bait cars can be turned off, and the doors can be locked by Minneapolis police. They can be tracked anywhere in the United States, Canada and Mexico.

While he couldnâÄôt reveal how many vehicles were in the fleet, Johnson said the department tries to use vehicles that are the most likely to be stolen. Honda Civics and Accords are the most stolen vehicles in Minneapolis, he said.

âÄúI look at the top 10 [vehicles] taken in Minneapolis, it doesnâÄôt do much good to have a Jaguar when you never have a Jaguar stolen,âÄù Johnson said.

Minneapolis police park the cars in areas where auto theft is most prevalent in the city. Johnson said he often places vehicles in the Southeast Como neighborhood.

âÄúIf I was a car thief thatâÄôs where IâÄôd go âÄî thereâÄôs so many different cars, and people leave stuff in their cars,âÄù Johnson said.

Although he couldnâÄôt remember a recent time that a bait vehicle was stolen in Southeast Como, Johnson recalled an incident where two âÄúcollege-looking guysâÄù stole a vehicle, drove it two blocks and then abandoned the car.

Johnson believed it was a prank.

Bait cars alert 911 once they are stolen, so the police department doesnâÄôt need officers to monitor them.

âÄúThereâÄôs reality and then thereâÄôs perception, and auto theft is one of those crimes that really effects the perceptions of the community in terms of how safe people feel because itâÄôs such a personal asset,âÄù Samuels said.

The bait vehicles have also led to a greater conviction rate among car thieves. According to Johnson, 95 percent of bait car arrests lead to convictions.

Fewer bait vehicles have been stolen in recent years. Johnson looks to that fact as evidence that the Auto Theft Prevention Program is working.

âÄúWe had thousands more cars stolen when we first started than we do now, but thatâÄôs because [auto thieves] know theyâÄôre out there,âÄù he said.