Offense rolls in sweep over Wisconsin 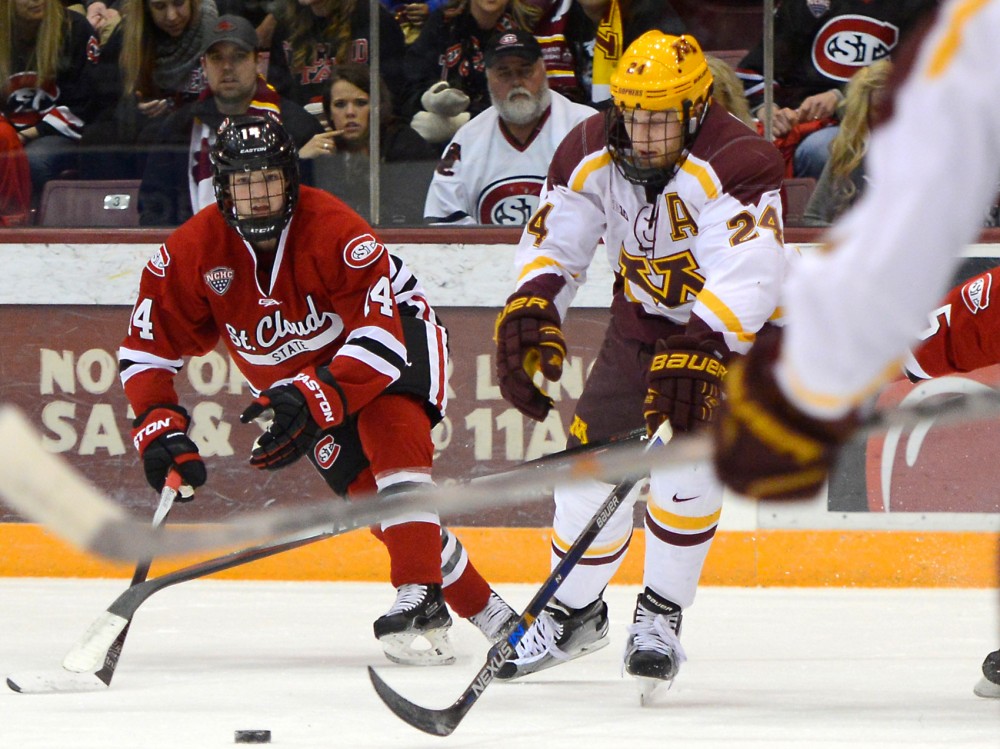 by Mike Hendrickson
The Gophers needed only 12 seconds for their first goal Saturday, and the offense didn’t stop there.
The team scored nine goals on the road against Wisconsin Saturday — its most in a game since 2011 — and four on Friday in Minnesota’s first sweep in Madison since 2006.
The Gophers (13-10, 8-2 Big Ten) beat the Badgers (4-12-6, 1-7-2-1 Big Ten) 4-0 on Friday and 9-2 on Saturday.
“It was just one of those games,” head coach Don Lucia told reporters after Saturday’s game. “It was nice for us to score some goals.”
With the sweep, the Gophers are in first place in the Big Ten and have won five games in a row.
“We’re coming for that No. 1 spot like we had last year,” junior defenseman Michael Brodzinski told reporters after Saturday’s game. “I think if we keep this run going that it could be ours by the end of the year.
Brodzinski scored a hat trick on Saturday, with all three of his goals coming in the third period. It was the first hat trick by a Minnesota defenseman since 2007.
“[It] still hasn’t really [sunk] in,” Brodzinksi told reporters after Saturday’s game.
Seven Gophers players scored a goal in the game, including junior forward Hudson Fasching, who scored his team-leading 15th goal of the season.
Minnesota had six even-strength and three power-play goals in the game, aided by two major penalties called on Wisconsin. Freshman forward Tommy Novak drew both penalties.
The Badgers pulled freshman goaltender Matt Jurusik after the Gophers’ first two goals, but backup Adam Miller allowed a goal less than two minutes later. Jurusik then came back in and allowed the last six goals.
The 4-0 victory on Friday was the third shutout of freshman goaltender Eric Schierhorn’s career. He stopped 29 Wisconsin shots Friday and 25 more on Saturday.
Schierhorn almost had to sit on the bench for a bit in the second period of Friday’s game after a slap shot hit him in the face, forcing him to skate off the ice temporarily.
“I just got it quickly stitched up,” Schierhorn told reporters after Friday’s game. “It didn’t really hurt. Something happened, and [my face] just started leaking.”
Schierhorn came back in the game with the Gophers already up 3-0 and continued to dismantle the Badgers. Junior forward Vinni Lettieri scored one final goal in the third period to cap off the team’s victory on Friday.
Fasching scored the team’s first goal of Saturday’s game on the power play, breaking the team’s streak of 16 straight power-play opportunities without a goal.
“We had a little bit of a dry spell,” Fasching told reporters after Friday’s game. “We’re getting looks. We’re understanding what we need to do more.”
The Gophers have had a losing record for most of this season, but now the team is 7-2 in its last nine games.
“I’m happy for our kids,” Lucia told reporters after Saturday’s game. “They’ve been through a lot. It’s not easy when you’re not winning in our program. … Winning gives you confidence.”
Delete Image
Align Left
Align Center
Align Right
Align Left
Align Center
Delete Heading