A&E caught up with comedy's newest merchant of mean 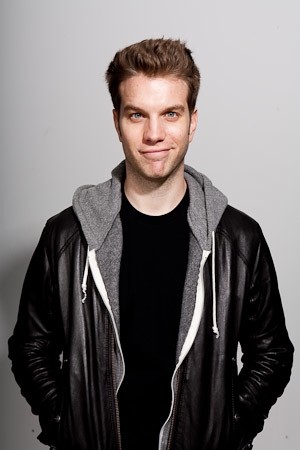 Anthony Jeselnik will be performing at the Acme Comedy Club through Saturday.

When: Thursday through Saturday

For Anthony Jeselnik, there is no line. And if there was one, heâÄôd cross it immediately.

For almost a decade, the Pittsburgh native has carved out a niche for himself as comedyâÄôs newest (and most talented) merchant of mean by establishing a stage persona thatâÄôs as clever as it is unabashedly offensive.

And his debut album âÄúShakespeareâÄù is as good of an introduction as anything else. ItâÄôs a minor masterpiece of comedic shock art teeming with enough jokes about sex, misogyny and death that itâÄôd have your grandparents cringing for weeks.

A&E caught up with Jeselnik to talk about roasts, his favorite villains and why he doesnâÄôt care that youâÄôre offended by his jokes.

When you were first asked to do the Donald Trump roast, did you feel intimidated?

No, because I had gotten to write for the David Hasslehoff roast the year before and got to see how it all worked. So I was really glad I had that experience and I knew how those roasts worked pretty much. It wasnâÄôt too scary.

It seems like itâÄôd be your bread and butter, too.

You know, I always thought so. I always thought my short mean jokes would be perfect for a roast. But you never know. So I was very happy that it went well and this one has been received well so far, too.

Your humor definitely has a mean streak to it, but you seem like a perfectly nice person. WhereâÄôs it come from?

I think itâÄôs my sense of humor is just people doing mean things. All my jokes are make believe. I make up people and do mean things to them. So itâÄôs not really me being mean. But I really think just, like, if somebodyâÄôs trying to eat a sandwich and someone else just slaps the sandwich out of their hand, thatâÄôs hilarious. And to do it to a stranger is dick, but if you do it to someone you know, like a friend, I think thatâÄôs just really funny.

YouâÄôve said you were always into darker subject matter when you were younger. Did you have any favorite villains?

I loved the Joker from âÄúBatman.âÄù I was a huge Joker guy. I wasnâÄôt a big comic book dude, but he was a big favorite of mine. And I always loved Shakespearian villains. They were just so evil. I remember Aaron the Moor from âÄúTitus Andronicus.âÄù They kill him in the end and his only regret in dying is that he canâÄôt do more evil [expletive]. That just cracked me up. Also, bad guy wrestlers were always really funny to me. I loved Ravishing Rick Rude. He was just such a dick.

What other topics do you want to explore that you donâÄôt think youâÄôve covered enough?

God, I donâÄôt really know. I would love to just find new ways to attack everything. Cancer was a big one where people just get so turned off by the word being brought up. So to try and make a joke to get people to laugh at âÄî that will be fascinating to me for quite some time.

Rape is also a big one because people get so upset about it. And I understand that but itâÄôs an awful thing that happens and if it stops happening IâÄôll stop joking about it, but until then I feel like I should be allowed to. But it really turns people off, so trying to find a way to keep people on board while youâÄôre bringing up that subject is something IâÄôll keep working on.

Why do you feel compelled to joke about it?

What do you say to people who just tell you youâÄôre being insensitive? Why donâÄôt you feel like comics have a responsibility to them?

Because thereâÄôs so many different comics. ItâÄôs the same reason that Metallica doesnâÄôt have a responsibility to country music fans when they make an album. You know, why should I answer to you? IâÄôm doing exactly what I think is funny, and I have an audience for it. There are plenty of other comedians out there you can go enjoy. I donâÄôt feel like I should change for someoneâÄôs random opinion. And the people who hate me for certain things, there are people who love me for those exact same things. So you just have to let that go and I donâÄôt feel I need to respond to anyoneâÄôs question about it.

And they can say thatâÄôs bad, but thatâÄôs comedy. I think some people donâÄôt understand comedy and donâÄôt have a great sense of humor. It would be like if somebodyâÄôs playing cricket and you walk up and go watch the game, you canâÄôt just start yelling at them and expect them to explain to you what youâÄôre doing. ItâÄôs just entertainment and people have other options. ItâÄôs not that big of a deal. ItâÄôs just comedy. TheyâÄôre just jokes.

I know when you entered college you wanted to be a novelist. Have you ever thought about writing a book?

Absolutely. I think that will just come with my writing. Every time I write a script or something I get so bored because I just want to be writing jokes, and I just need to get that out of my system before I can go onto anything else. But I think certainly in the next 10 years thatâÄôs something IâÄôll consider doing is working on a novel. I think in the near future IâÄôll write a book, but it will be more of a comedian book; funny stories about my life sort of thing, not a real novel.

If you could roast anyone who would it be?

(long pause) I got to say Casey Anthony. SheâÄôd be a great one.