Janell Campbell and Shannon Golich have become close friends while competing on the Gophers gymnastics team. 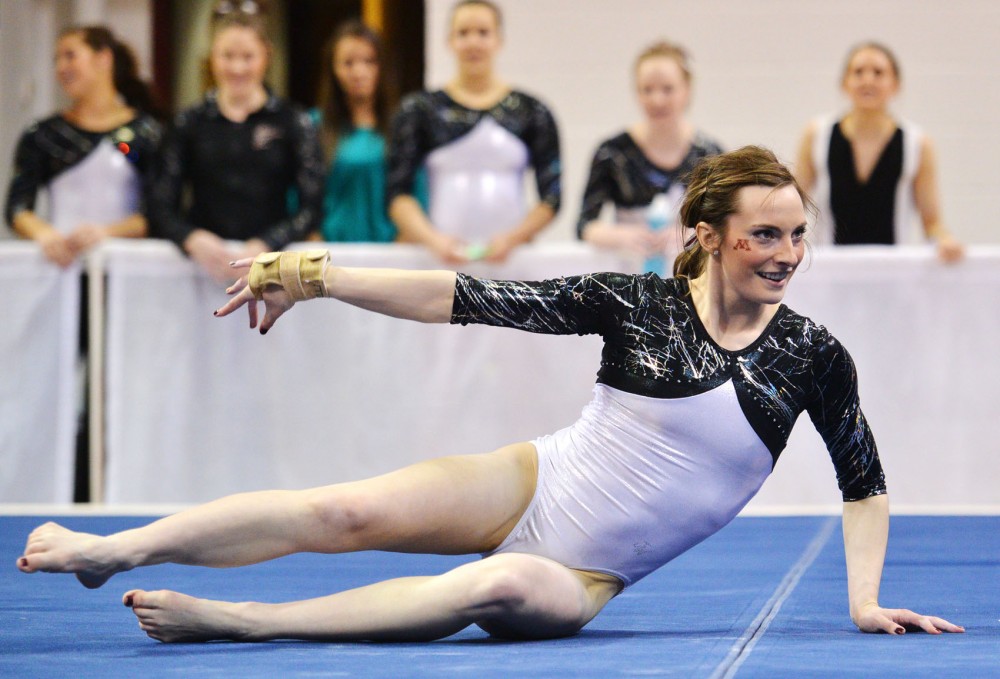 Minnesota's Janell Campbell competes on Saturday, Jan. 26, 2013, at the Sports Pavillion. Campbell carried the Gophers to victory during the final floor rotation with a score of 9.900.

Janell Campbell wrote down the top-100 goals she wanted to accomplish in her life at age 10.

She knew what she wanted: a full athletic scholarship for gymnastics at a Big Ten school.

Campbell accomplished that goal in 2008 when she got a full ride to the University of Minnesota. She described it as one of the most overwhelming moments of her life.

The Gophers women’s gymnastics captain has experienced a few more of those moments over the past four years. But perhaps more important than any routine Campbell has performed or any score she has received is the lifelong friend she has made in teammate Shannon Golich.

As the two seniors prepare for the final home meet of their careers this weekend, Campbell said their friendship extends far beyond the competition floor.

“I’ve created so many wonderful memories with her that can never be replaced by anyone else,” she said.

Golich said Campbell has become her best friend, and the two share a special bond.

Four gymnasts entered the Gophers gymnastics program in 2009. Only Campbell and Golich remain, which is part of the reason they are so close.

Only a few doors away from each other in Sanford Hall their freshman year, the two naturally became closer with time.

Now as seniors, both work to relay the culture of the team, support their teammates in practice and meets and lead by example.

Coach Meg Stephenson said the two have a noticeable bond in practice because they communicate well. She said it helped that they made it to their senior year together.

The seniors rely on each other outside of gymnastics as well. Golich said Campbell is the first person she goes to for advice or comfort.

“I could call her in the middle of the night, wake her up and she honestly wouldn’t care,” she said.

Both gymnasts made an immediate impact their freshman year and have remained in the lineup for the majority of their careers.

Golich has competed on the floor exercise, beam and vault since day one. Campbell competed in every event at least once her freshman season and has since been a specialist on uneven bars and floor.

Stephenson said both gymnasts made big improvements from their first year to their second year, after which they received the team’s most improved gymnast award.

“The fact that they tied for it is kind of funny,” Stephenson said.

Stephenson said both have improved their mental toughness on events and in practice.

Both gymnasts have battled adversity, as well. Golich entered her freshman year with a wrist injury and has never competed on bars due to the pain. Campbell had a foot injury early last season that kept her out of the lineup, and she has struggled at times on both of her main events this season.

Campbell said she wanted to enjoy her final season rather than worry about averages and scores.

“I’m feeling really excited for the end of my season but also really happy that I get a few more chances to celebrate my gymnastics,” she said.

Campbell has started writing a new goals list for after college but has only 22 goals so far. She said the list will likely contain more gymnastics goals.

“I would like to somehow still be a part of gymnastics,” she said. “The huge deal to me was just making it to college gymnastics and living my dream.”