Leveille steps up for Gophers

Amanda Leveille has started every game in net for the Gophers this year. 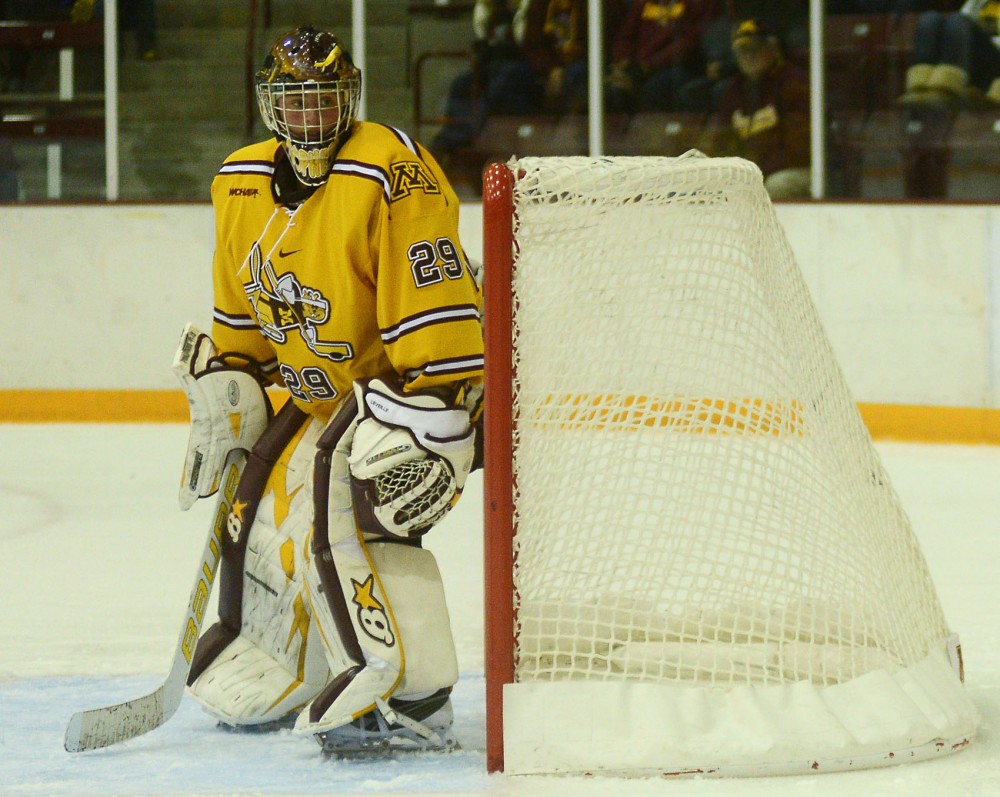 Dani Cameranesi chases the puck at the Women's Hockey game at Ridder Arena on Friday, Nov. 1, 2013.

Sophomore Amanda Leveille became a goaltender at an early age because she didn’t want to leave the ice, and playing between the pipes meant she didn’t have to.

“I hated coming off the ice,” she said. “I used to cry and pout on the ice, so the coaches just stuck me in net.”

She’s come a long way since then but admitted last year was a difficult one because she didnt see much ice time.

This year has been the polar opposite for Leveille, who’s been steady in net and has started every game for the Gophers.

She said she was confident in her ability coming into college and thought she might have a chance to start. Once she watched RÃ¤ty, though, she knew it wasn’t going to happen.

RÃ¤ty’s graduation paved the way for Leveille to take control of the starting spot.

“We talked a lot just about how there’s no guarantee [of starting] your first year or really throughout your career,” head coach Brad Frost said. “You’re going to have to earn it.”

And so far this year, she has.

Stepping into the starter role

Before coming to college, Leveille said, her identity was defined by hockey.

“Last year, not being able to play, I had to reset myself. And now, hockey, as much as it is really important in my life, people are more important,” she said.

Leveille said she was initially drawn to the Gophers because of the team chemistry and the coaching staff.

But advice from Mel Davidson at the Canada Under-18 Development Camp put the decision in perspective.

“[She] told everyone that when we’re picking our schools, we should pick it on the possibility that the first day we step on campus we could break our leg, and it better be the place you want to spend the next four years of your life,” Leveille said.

And though Leveille didn’t play much last season, her game improved.

“Even though it was hard to not play … she [was] able to learn from one of the best goalies in the world,” Frost said.

Leveille and RÃ¤ty said they didn’t talk much last year, but Leveille said she was able to learn by watching RÃ¤ty in net.

“I think she told me at one point that she has become a better goalie by watching me, and that’s a good thing that she was able to learn from me,” RÃ¤ty said.

This season, the Gophers are 12-0-0 and have held opponents to an average of 1.30 goals per game. Leveille currently sports a .944 save percentage, which is second among NCAA goaltenders who have played in more than 10 games.

Senior captain Bethany Brausen said Leveille has built up a lot of confidence this year — and that’s not just on the ice.

Frost said Leveille stayed in Minneapolis during the summer, and she’s matured both on and off the ice as a result.

“I think she’s really [come] out of her shell,” Frost said.

As someone who’s generally quiet, Leveille has emphasized communication this year.

“I try to be as loud as I can on the ice,” she said. “I’m obviously not the loudest person, but I’m working on it.”

The team lost a vocal senior class and replaced it with a more timid freshman class, Brausen said, so communication has been stressed this year. She said she can hear Leveille more on the ice.

“You put her on the ice, and she’s definitely talking to defensemen and telling them where to go with the puck, and [she’s] a definite leader from that position,” Brausen said.

Leveille has stepped into RÃ¤ty’s role and has been instrumental in the team’s success thus far.

“I think what we’ve learned this year is that just because there are big shoes to fill doesn’t mean we can’t do it,” Brausen said. “Amanda’s just taken the opportunity and run with it.”