Losing streak halted at three with dominant win over Brown 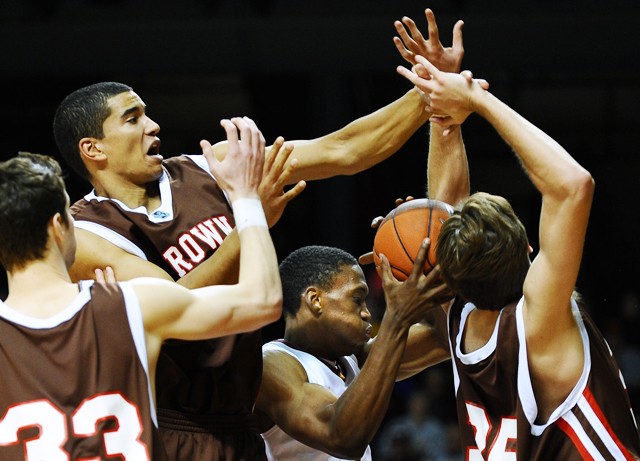 ItâÄôs easy to understand why Blake Hoffarber said the Gophers menâÄôs basketball team had fun on Saturday. In three consecutive losses before Saturday, Minnesota had struggled with shooting, ball handling and late-game execution. Eager to show theyâÄôre better than those disappointing performances, the Gophers broke out for their hottest start of the season in a thorough 91-55 victory over Brown on Saturday at Williams Arena . âÄúWhen youâÄôre not having fun, youâÄôre probably not playing well,âÄù said Hoffarber, a junior guard who had his first career double-double in his second start of the season. âÄúI think everyone was having fun today.âÄù The Gophers (5-3) were hot the entire first half, shooting 63 percent from the field. They went on separate runs of 14-0, 13-0 and 13-0 in building a lead that grew as large as 37 points before halftime. Hoffarber scored 13 points and showed off the 3-point-shooting stroke that escaped him in Big Ten play last season. For the second straight game and third time in five games, Hoffarber made three 3-point field goals âÄî a feat he accomplished just once in the final 22 games of 2008-09. The coaching staff had emphasized rebounding as a key to breaking the teamâÄôs slump, and Hoffarber led Minnesota with 10 rebounds. HoffarberâÄôs execution on the court was contagious, head coach Tubby Smith said, as Minnesota had a season-high 42 rebounds. Two guards âÄî Hoffarber and sophomore Devoe Joseph, who had five rebounds âÄî were among the GophersâÄô top three rebounders Saturday. âÄúIâÄôve been worried about whether we were big enough [to get enough rebounds],âÄù Smith said. âÄúLo and behold, we find it in Blake that heâÄôs willing to do those things, to do the little things that weâÄôve tried to teach.âÄù Smith joked about Hoffarber, a junior in the Carlson School of Management , âÄúHeâÄôs a guy that most of [his teammates] will be working for someday, and I probably will too because heâÄôs pretty cerebral.âÄù After the Gophers had 31 total assists in three losses, they matched a season high with 25 assists, led by six from Joseph. âÄúWe did a lot more creating for others today,âÄù Joseph said. âÄúPeople were looking for each other and playing unselfish.âÄù Six Gophers had multiple assists and double figures in points. Seven players made at least four shots, and each of them made more than half of their attempts. The Gophers shot well early at Miami last Wednesday, but they were ultimately hurt by three turnovers that led to six Hurricanes points in the final 1:36 of a 63-58 defeat. On Saturday, the Gophers committed a turnover when Brown (4-6) had a 3-2 lead less than two minutes into the game, but they did not commit another one in the first half and built a 51-20 lead. They made 21 first-half field goals, which was one more than they had in both halves of a loss to Portland and one fewer than they had in subsequent losses to Texas A&M and Miami. Joseph said the shot opportunities on Saturday were the results of better ball handling. âÄúI thought we took care of the ball great,âÄù Joseph said. âÄú[Brown didnâÄôt] pressure us a lot, but as far as just not making bad mistakes âÄ¦ I think we made the right decisions.âÄù MinnesotaâÄôs defense forced Brown to take poor shots early. The Bears made two of their first 16 shots and shot just 21 percent in the first half. Smith said the disciplined play was a sign of recovery from the effects of a losing streak. âÄúWe try to get back to basics âÄ¦ letting our guys know that [there will be] no more excuses,âÄù Smith said. âÄúYou donâÄôt have a choice whether youâÄôre going to succeed or fail.âÄù Smith said he reminded his team that the coaching staff still believed in the players after the recent losses. âÄú[We] let them know that they are winners,âÄù Smith said. âÄúThey start to wonder if [I think theyâÄôre] any good and start doubting themselves, so we need to just build them back up.âÄù Smith said SaturdayâÄôs all-around performance proved to players and coaches that they are close to being a great team. âÄúI needed to see it, and I think they needed to feel it, do it,âÄù Smith said.