This is the third Gopher Quick Clinic to open in the past two years. 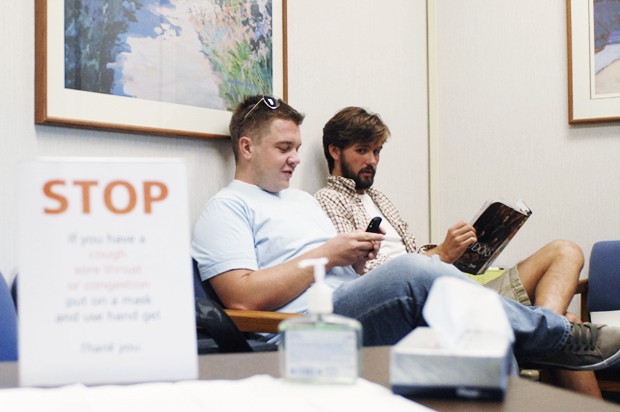 University of Minnesota students wait at the Gopher Quick Clinic in Coffey Hall on Monday. The clinic provides walk-in care to students, staff, and faculty with minor illnesses and conditions.

Students and staff on the St. Paul campus no longer have to travel to Minneapolis to see a nurse about a sore throat, allergies, or flu shots with the opening of a Gopher Quick Clinic in Coffey Hall at the beginning of this semester. The Gopher Quick Clinic provides walk-in care to students, staff, and faculty with minor illnesses and conditions, and is one of three available at the University of Minnesota through Boynton Health Service. The addition of a St. Paul counterpart was a result of demand from people living or working on the campus, said Jill Wooldridge, a Physician Assistant at the Quick Clinic. As of Monday afternoon, the clinic has seen about 20 people, according to Dave Golden, Director of Public Health and Marketing at Boynton Health Service. Some students said more should be done to raise awareness of the service. Kirsten Wisniewski, a community adviser at Bailey Hall in St. Paul, said she had not heard of the new Quick Clinic, but that it is a good idea. The health advocates in the dorm âÄúcan only do so muchâÄù to help sick students, Wisniewski said. Another community advisor, Nikki Wee, works at Centennial Hall in Minneapolis but lived in Bailey Hall for two years. She said when she was at Bailey there were residents who were really sick and could not go to the Minneapolis campus. âÄúI wouldnâÄôt want to go all the way over there,âÄù said Brittany Niesen, a second-year student living in Minneapolis. She said that although she has not lived on the St. Paul campus, she has used the Quick Clinics before, and empathizes with people who would have to travel to get care. Dr. Ed Ehlinger, director of Boynton Health Services , noted advertisements for the clinic in front of Coffey Hall and the St. Paul Student Center . He said an e-mail has also been sent to students alerting them of the new service. âÄúIâÄôm confident were going to be getting people in there,âÄù he said. University employees who would normally have to take half a day off from work for a doctorâÄôs appointment are now able to stop in for a few minutes and get care faster, Ehlinger said. It may also prevent the spread of disease among those who would commonly take public transportation, like the campus connector, to visit Boynton in Minneapolis, Ehlinger said. A clinic has existed on the St. Paul campus for more than half a century, providing pre-arranged appointments with a doctor, a service that will still be available in the afternoon. The Quick Clinic provides a narrower range of common services, and is open from 9 a.m. to 1 p.m. The Quick Clinic will function using the existing staff already at the clinic, Ehlinger said. The first Quick Clinic was added to Boynton Health Service in spring of 2008, and another was added to Coffman Union in fall of 2008, Golden said. The St. Paul clinic has been in the works since about January, Ehlinger said. The St. Paul Quick Clinic will offer the same treatments as the Minneapolis clinics; common cases are sore throats, allergies, and bladder infections. The Quick Clinic will also provide tetanus and flu vaccines, Wooldridge said. She said the St. Paul clinic is more likely to see animal bites from dogs and cats, due to the proximity to the School of Veterinary Medicine . People outside the University may use the facility, but will incur out-of-pocket costs.