The Council received the minimum wage petition on Friday, which has drawn controversy by some. 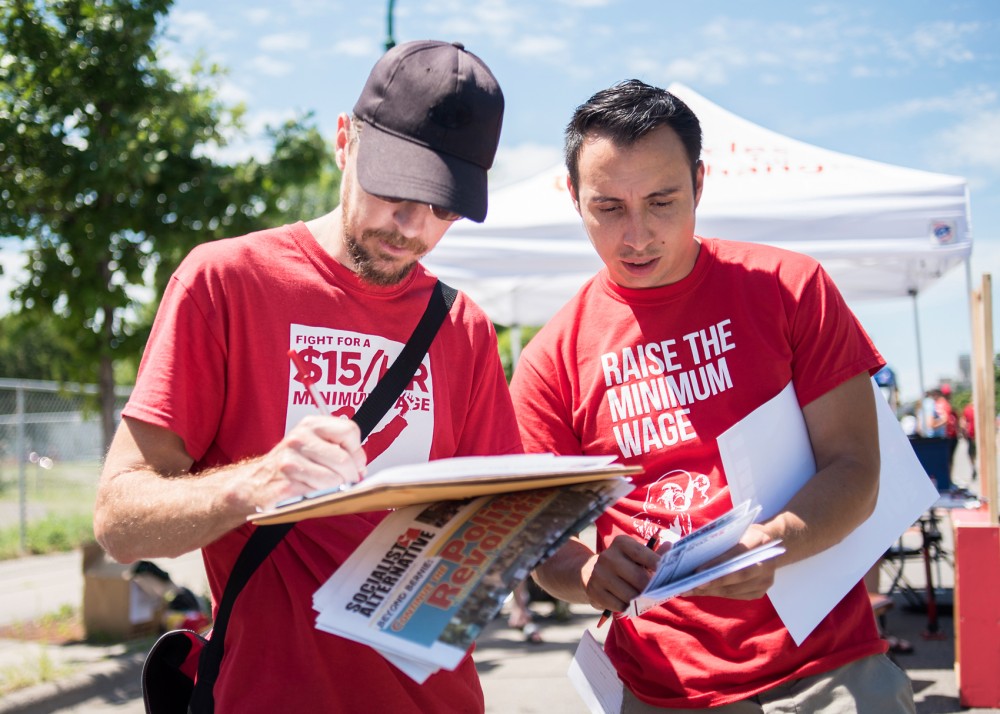 Luke Gitar and Nestor Garcia of Minneapolis talk during their work to raise awareness for the 15 Now campaign while at Open Streets Minneapolis: East Lake on Sunday. Campaigning to increase minimum wage to $15 an hour, 15 Now obtained nearly 20,000 signatures, more than enough to make it onto the November 2016 ballet.

A proposal to raise the minimum wage in Minneapolis has drawn contention from some who think it will negatively affect businesses.

The petition, with over 8,000 signatures, was received by the City Council Friday. The proposal would raise the city’s minimum wage incrementally over several years to $15 per hour.

If passed by the council, voters could expect to see the city charter amendment on the November ballot.

The proposal comes shortly after the approval of a paid sick and safe leave measure, which Ginger Jentzen, executive director for 15Now Minnesota, said was a significant victory.

Jentzen — whose group helped draft the minimum wage proposal — said the success of paid sick leave pushed them to pursue the wage amendment.

“We wanted to put forward a very strong proposal that we feel is also very winnable in the fall of 2016,” she said.

Jentzen said the proposal is important for many Minneapolis residents who struggle to make ends meet financially.

For much of her life, Jentzen said she was a server and home healthcare aid and found it hard to get by. She said she saw others struggle as well.

But John Stanoch, president and CEO of the Minneapolis Regional Chamber of Commerce, said it wouldn’t be appropriate to put the amendment on the ballot.

“We believe that this is not an appropriate use of the city charter and should therefore not be placed on the ballot,” Stanoch said.

He said his group thinks the city should not be able to supersede state law.

“It’s our strong belief that this whole area, that action by either the city of Minneapolis or any other municipality in the state, has been preempted by the state establishing a statewide minimum wage,” Stanoch said.

In addition, he said he questioned the legality of putting the amendment on the ballot.

But Jentzen disagreed and said the proposal is legal, adding she has confirmed the legality with local and national lawyers.

“They’ll say that jobs will leave the city; they’ll say that … this is going to cause … major job loss, that companies won’t want to do their business here,” she said.

Some of these concerns were voiced by Stanoch, who said the cumulative effect of the wage raise alongside paid sick leave would negatively affect businesses.

“The economics of this, especially coming on the heels of the sick and safe leave ordinance, will create, potentially, a very uncompetitive environment for Minneapolis,” he said.

Pete Jacobson, co-owner of Land’s End Pasty, said he, too, thinks the proposal is “ill-advised.”

Currently, Jacobson’s business has no employees, but he plans to hire a staff this fall. And once he starts hiring, Jacobson said workers’ salaries will comprise a large portion of his business’s monthly costs.

“The wages would probably end up being close to 50 percent if not more of our monthly budget,” he said.

If the minimum wage was increased to $15, Jacobson said the only way his business could survive is if it drastically increased prices.

Still, Jentzen said she doesn’t think the increase would hurt businesses, adding that there have been positive impacts for cities where increased minimum wage measures have gone into effect.

She said a $15 an hour minimum wage would also have a large effect on economic disparities in the city — especially for women and people of color who often hold low-wage jobs.

“Forty-eight percent of people of color in Minneapolis are stuck in low-wage jobs,” Jentzen said. “I think that [a wage increase] would have a dramatic impact on the … racial disparities that have been highlighted so clearly in Minnesota.”

She said passing the proposal could also inspire workers across the country to organize and push for policy changes in their areas.

“This would be a tremendous victory in that we would be the first Midwest city to achieve [an increase],” Jentzen said.

The city sent the proposal to the city attorney’s office for a legal opinion, and the City Council will vote on the measure by August 5.