Steve Fletcher, the DFL-endorsed candidate for the Ward 3 Minneapolis City Council seat, hopes to use his community organizing background to engage students. 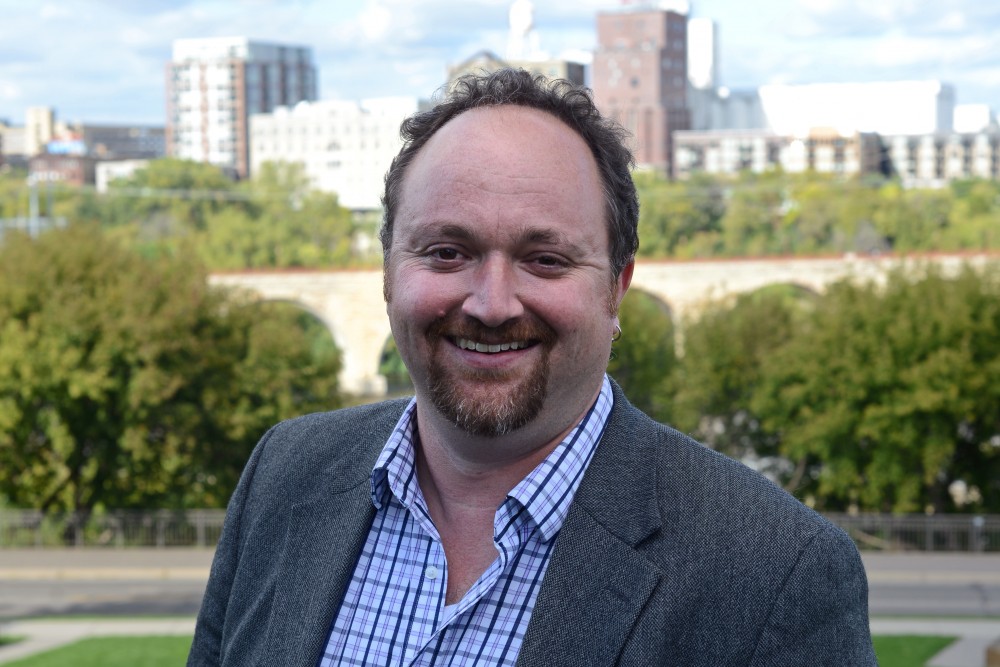 Steve Fletcher, a Ward 3 city council candidate, poses for a photo at Gold Medal Park in Minneapolis on Wednesday, Sept. 27.

Fletcher and his team stopped to speak to tenants at The Marshall apartments, most of whom are students, about his priorities for the area. Fletcher talked with the students about affordable housing, emphasizing diversified options as opposed to rent control.

“The single biggest thing is affordable housing, and that’s an issue that has needed attention since I was a student at the [University of Minnesota]. I lived in some very unsafe housing one of the years that I was there, and I remember how challenging that was,” Fletcher said.

Fletcher hopes to use his experience as a University alumnus to gain student support and win the election in November. He plans to use his community organizing experience to advocate for students and increase voter turnout in Ward 3, which is home to the student heavy areas in Marcy-Holmes and Dinkytown.

Student support was a key factor to Fletcher winning the Minnesota Democratic-Farmer-Labor Party’s endorsement, he said.

“There were a lot of students who caucused for me back in February and who were part of the DFL convention in May, and that was a big part of my support that helped me get the DFL endorsement,” Fletcher said. “And we’ve continued working with students ever since.”

The Fletcher campaign raised just under $22,000 as of Aug. 1, according to Hennepin County documents.

This amount was comparable to that raised by Green Party Candidate Samantha Pree-Stinson, but just a third of what Socialist Alternative Candidate Ginger Jentzen raised.

Fletcher’s campaign manager, Laura Dorle, joined the campaign after speaking with students at the convention.

Dorle, who graduated from the University in 2014, said Fletcher’s platform on affordable housing resonated with her because of her own experience dealing with high rent near campus.

“The U of M is one of the top universities in the country, and if it truly wants to bring in a diverse group of students and have students live in and be a part of the community, it really needs to be putting pressure on the developers that provide housing,” she said.

In 2010, Fletcher served as the executive founding director for Neighborhoods Organizing for Change, a grassroots organization in the Twin Cities focused on racial and economic justice. Fletcher said this background contributed to his knowledge of community organizing and affordable housing.

“It will continually shape my analysis because we did a lot with housing at that time, both with foreclosure resistance and with affordable housing in tenant advocacy,” he said.

Community outreach and student engagement are priorities for the campaign, according to Dorle. In addition to door-knocking, Fletcher has communicated with students through groups on campus like Women for Political Change.

Abby Reynolds, a 2015 University graduate, joined Fletcher’s campaign before February’s caucuses. She said she hopes to see more students turn out for the municipal elections on Nov. 7.

“Voter turnout in [municipal] elections is pretty dismal,” Reynolds said. “I don’t want people older than me determining the entire outcome. We should strive to have a turnout that represents everyone.”

“If you’re a student and you’re taking classes close to Dinkytown and you’re trying to get to northeast where you live, you have to transfer once to get there,” he said. “We don’t have a bus that goes straight up University to northeast. That’s really inefficient and almost every other city has moved away from that model.”

Cody Olson, executive director of the Southeast Como Improvement Association, has been involved with Fletcher’s campaign since the spring.

“He was one of the first candidates to say ‘black lives matter,’” Olson said.

“For me, racial justice is the lens that I look at everything through. I think that has to be how we proceed as a city if we’re going to make any progress,” Fletcher said. “If we’re talking about anything from transportation to housing to anything else, how does this move the needle on structural inequality that’s holding our city back? If we can’t answer that question, we need to really dig a little deeper. Nothing is going to be right in this city until we get that figured out.”