Eric Kaler hopes to accomplish several initiatives before he leaves. 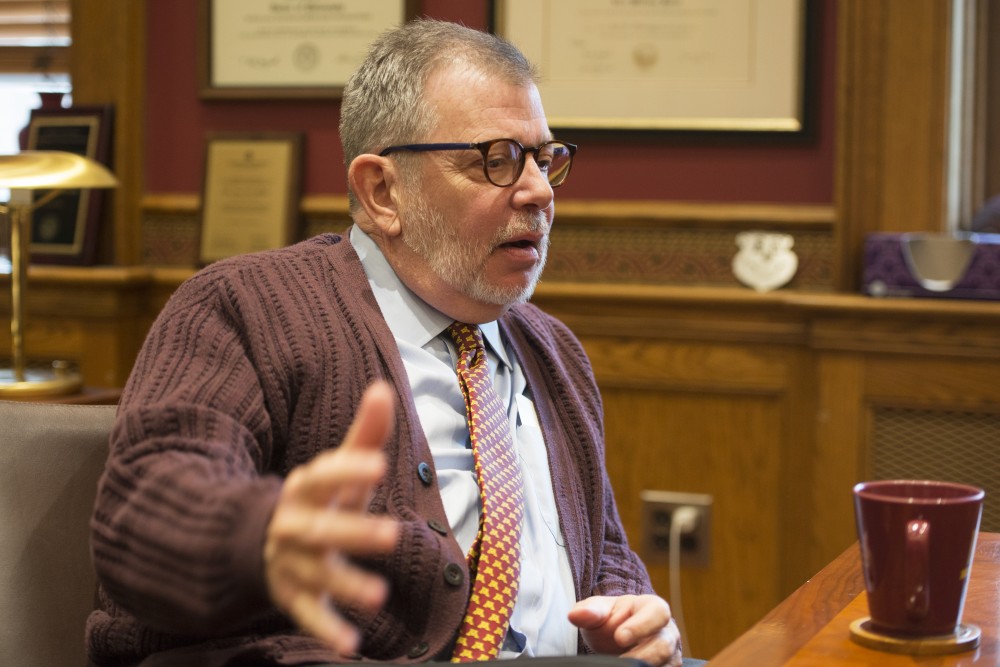 University President Eric Kaler answers questions from the Minnesota Daily on Thursday, Sept. 27, 2018 in his office at Morrill Hall. Kaler told the Daily his favorite part about the fall semester is watching Gopher football and volleyball games.

President Eric Kaler is taking on a full agenda to round out his time at the helm of the University of Minnesota.

From making a decision about Coffman Union to overseeing the University’s multi-million dollar legislative request, Kaler expects to accomplish a number of big-ticket items before President-Designate Joan Gabel takes over in July.

“We’re very focused on making certain that the end of President Kaler’s tenure is very productive,” Chief of Staff Jon Steadland said. “There’s a lot of work yet to do.”

As he approaches the end of his eight-year tenure, Kaler’s final semester on campus will be anything but a lame duck session.

“My goal is to capitalize on this transition year. That means doing some things that are hard,” Kaler told the Board of Regents in September.

Thus far, Kaler has checked the box on several priorities, including negotiating a new M Health Fairview partnership and revamping the University’s health sciences operations. The final chunk of Kaler’s six-year plan to cut a total of $90 million in administrative costs will go into place this fiscal year.

“I think President Kaler’s got a lot to be proud of,” McMillan said. “As I look back with President Kaler on what’s accomplished, that tuition track record is good [and] our rankings across most of our professional and undergraduate and graduate schools are solid.”

However, several major priorities remain on Kaler’s plate, including whether to rename controversial buildings on campus.

Steadland said the president wants to “make certain we have some resolution on the historical namings issue” before leaving. But the renaming process has taken longer than expected — recommendations for Coffman and three other buildings underwent a series of delays in recent months.

Kaler’s other priorities include setting a direction for expanded child care options near campus and “institutionalizing” the University’s work to prevent sexual misconduct, Steadland said.

“You can’t do everything during this time frame, but the priorities we have are things that I know President Kaler wants to get accomplished,” Steadland said.

In his final legislative session, Kaler is asking lawmakers for $87 million for the next two fiscal years and $232 million in capital bonding.

Rep. Bud Nornes, R-Fergus Falls, the leading Republican and former chair of the House higher education committee, said he has had a good working relationship with Kaler.

But Nornes said Kaler’s final request is “very aggressive,” and there may not be enough state funding to go around. The University’s state funding requests have come up short in recent years.

“You have to trust the people you’re dealing with, in this case President Kaler, and I would say that I do. You also do need to verify some things,” Nornes said. “I think, overall, that’s been the relationship I’ve had with him.”

However, Kaler leaving has also put some of the University’s large-scale efforts on hold.

The University’s system-wide strategic plan — a multi-year process expected to be completed last fall — was pushed back because of Kaler’s departure. Instead, it will be left to Gabel when she comes into the role.

“We’re at a pause-point in our system-wide strategic planning efforts, which is appropriate given that we’re changing leaders,” said McMillan. “Ideally, it would have been nice if that was all done, but there’s only so many big balls you can push uphill.”

The biggest obstacle in Kaler’s last months, Steadland said, is the limited time.

“As this plays out, I’m sure we will have more and more moments … where you have to say, ‘OK, are we going to deal with this issue right now or are we going to leave it for President-Designate Gabel?’” Steadland said.

But Steadland said the president expects to resolve many of his agenda items.

“We are really focused on finishing strong and making sure we come to a conclusion in these final months,” he said.