University creates fashion of the future 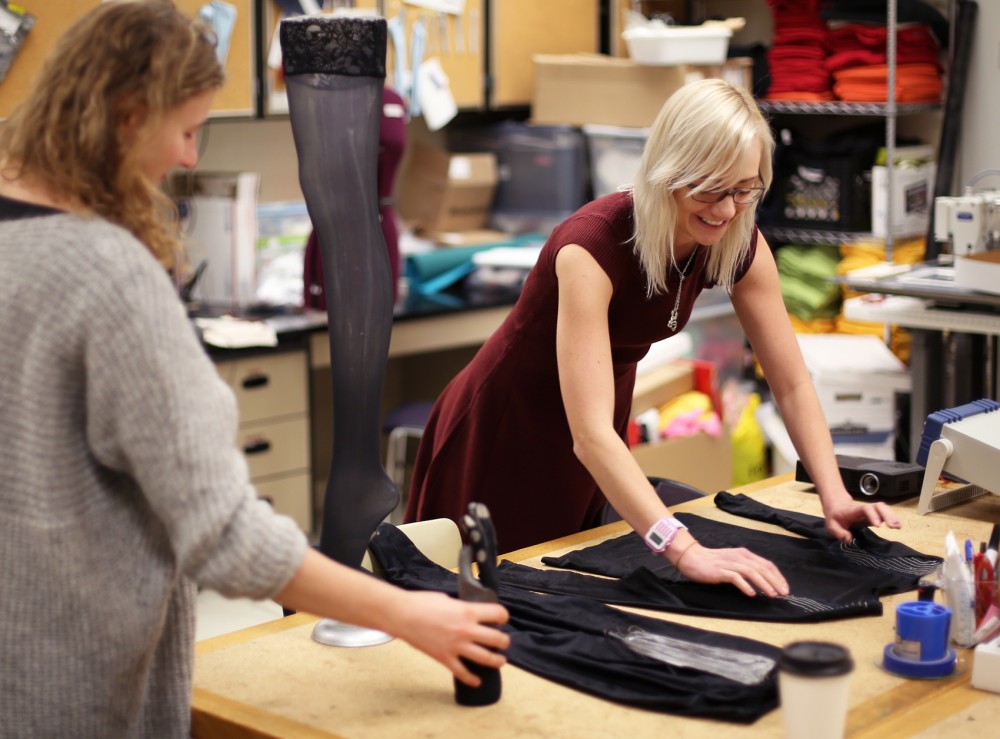 Grace Kramer
Graduate students Crystal Compton and Julia Duvall sat in the UMN Wearable Technology Lab surrounded by sketches, notes, sewing machines and mannequin parts. What looked like regular articles of clothing were strewn about the lab, but each piece had a larger purpose.
“Think about what it means to be a consumer of clothing. You have a giant wardrobe, each piece only has a singular function,” Dr. Brad Holschuh, co-director of the lab, said.
“The whole system is inefficient, and that’s because the clothing is not multi-functional.”
Holschuh will join the Wearable Technology Lab full-time as co-director in January and will also start as a professor of a wide range of classes in the College of Design.
He joins Dr. Lucy Dunne, who created the lab in 2008 as part of the apparel design program.
The lab works to integrate apparel and new technology to change the way people look at clothing.
“I think they’re often thought of as very separate, science and art,” Duvall said. “But they’re very interrelated, and I think a lot can come of combining the two.”
WTL is working on wearable technology for everyday purposes that also aims to solve problems that people deal with daily.
“Lucy and our lab have really legitimized and matured this idea that you can have clothing that interests you, that helps you, that increases your performance or improves your health,” Holschuh said. “Everything from the health side of things to the aesthetic side of things.”
One of the lab’s most recent creations is “Brace Yourself: the World’s Sexiest Knee Brace.”
The knee brace looks like a typical lacy stocking but protects the knee from damage by sending signals from a single, almost unnoticeable wire that goes up the back.
With projects like the knee brace, WTL incorporates technology into clothing without it being noticeable.
“We’re working towards having technology still be there and still exist but not necessarily being aware of it or knowing it,” Compton said.
Both Compton and Duvall attended the University as undergraduate apparel design students. Neither knew they would end up working with technology and science.
“Growing up I always loved math, but I gave up on the technical side of my studies and started going for apparel design,” Compton said. “I realized over the years that it actually has a very technical side, and it involves math as well.”
Before starting a design, the lab researches the technology they want to utilize. Each project presents an opportunity for learning, as each technology is different.
“With any project that you work on, you need to learn more about it and do some research, test things out,” Duvall said. “That was difficult at first — I hadn’t done anything like it.”
With what they have learned and researched, Duvall and Compton have had internships working with wearable technology at places like Microsoft and NASA.
Along with creating the wearable technology, Holschuh said they must create a need for the wearable technology as well.
“It’s no longer in the realm of some nerd somewhere who made a gadget,” Holschuh said. “That used to be the stigma of what it meant to have wearable technology. Getting the buy-in is half the battle.”
Through personalization and making it a necessity, the lab is working to make wearable technology the norm.
“When adopting anything that’s new, at first society thinks it’s weird, but once you see it more and more, it gets more integrated,” Duvall said. “More people will wear it if it fits with your personal style and needs.”
Delete Image
Align Left
Align Center
Align Right
Align Left
Align Center
Delete Heading