The free, week-long summer initiative draws in high schoolers to learn about opportunities at the University of Minnesota. 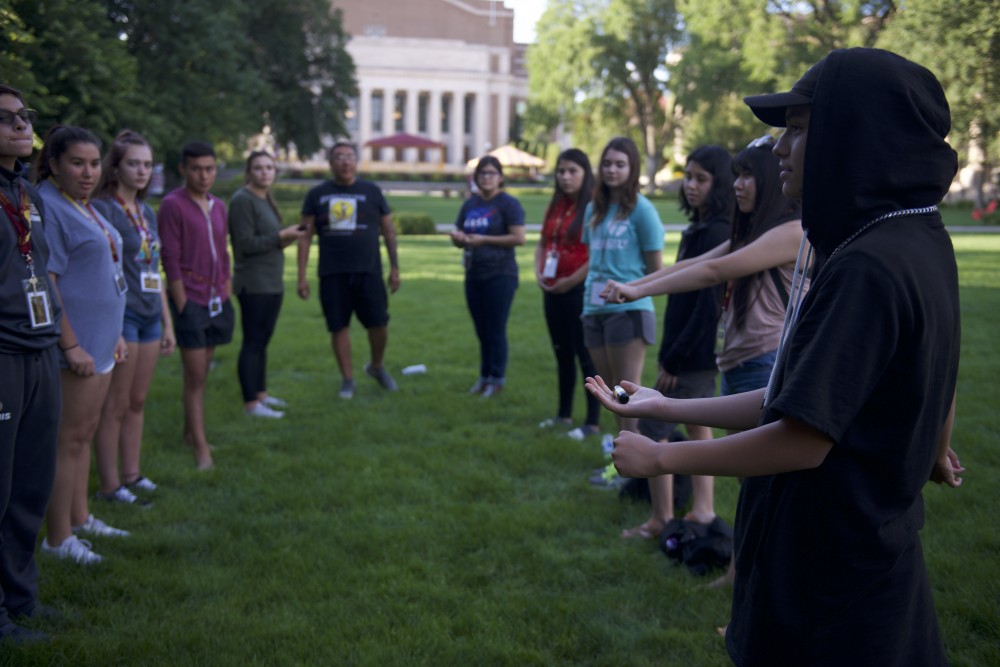 The American Indian Studies department at the University of Minnesota held its first summer camp for high schoolers to encourage them to further their education. High schoolers played a Lakota version of a handgame outside of Northrop on Tuesday, July 31, 2018.

A new summer camp at the University of Minnesota is aimed at bridging the college attendance gap for Native American high school students in Minnesota.

The free seven-day program, hosted the University’s American’s Indian Studies department, began on Sunday. Its purpose is to strengthen the University’s Native American student community by allowing high schoolers to explore opportunities at the University and the possibility of attending college.

“It’s… important for [the students] to be able to view college through… an Indigenous lens — and that’s the whole purpose of this [program],” said Summer Lara, a youth mentor for the program and University senior.

The 13 students are staying in Territorial Hall and taking classes in American Indian literature and either Dakota or Ojibwe language, all while learning how to navigate the University.

Since the program began, students have visited the Raptor Center, canoed on Lake Nokomis, visited University STEM labs and taken a tour of sacred Dakota sites around the Twin Cities.

Fawn Grauman-White, AIS’s community engagement coordinator, said she hopes the program will help students realize the resources and connections available to them at the University, which could allow them to feel more confident about the prospect of attending college.

“In the American Indian community in the greater Minnesota area… the [University] seems a little bit unattainable for most, so we want to make it as community-based as possible,” Grauman-White said.

Scholarships are available to support Native student enrollment at the University, though not all students make use of the funds, said Katherine Hayes, former AIS department chair.

“[The University] has not necessarily been the friendliest place for Native students, and we have to acknowledge that,” Hayes said. “Part of what we’re trying to do is create a better campus culture, and then convince students to think about coming to the University and tell them about the scholarships that they can apply for.”

The University of Minnesota-Morris has provided a tuition waiver for students affiliated with federally-recognized tribes since 1960 because of the campus’ history as a Catholic boarding school for Native American children. The Twin Cities campus does not provide a tuition waiver.

This is the first time many of the students have been away from home, Grauman-White said.

“The main goal is to promote AIS and our community that we have here on campus and… our connection with… the American Indian community that surrounds us,” Grauman-White said.

AIS plans to apply for grants in the future to support the program, which has been in planning stages for several years and currently relies on internal funding.

“It’s very important to us to serve Native communities in Minnesota — this is a really important way of reaching out to Native youth and potential future students,” Chang said.

On Tuesday evening, the students transformed Northrop Mall’s grassy area into a space for playing a Lakota variant of handgame, a Native American guessing game.

“We do stuff like this here on campus in our student group,” Lara said while watching the students play handgame. “We incorporate our culture on campus — that’s not something [Native American students] have to keep separate.”

Lara said she’s already seen the students open up since the program started.

“Last night when we were talking, [the students] said it was really helpful to be able to see… youth mentors, and see that we are Native people that are in college,” Lara said. “It’s all about just showing them… role models, showing them that they like can do it too… this is an opportunity for them — whether it’s here or another college.”