Players said the only thing missing from the Harry Potter-inspired game is magic. 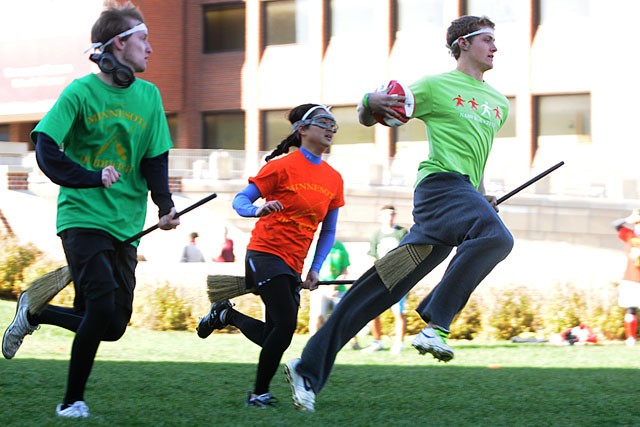 In J.K. RowlingâÄôs books quidditch is played by a team of seven wizards flying on broomsticks. In front of Coffman Union on Sunday, there were University of Minnesota students, quidditch and broomsticks âÄî but there was no flying.
About 35 University students sprinted across the grass in hopes of becoming the first-ever quidditch champions on campus.
For those perplexed by the word, quidditch is the popular sport played by wizards in the âÄúHarry PotterâÄù series, and the game has recently been adapted to the non-wizard world.
âÄúLet me be clear: We donâÄôt play quidditch,âÄù Luke Zak, president and commissioner of the University Quidditch League, said. âÄúWe play muggle quidditch.âÄù
Muggles, or non-wizards, play it by cobbling together elements of dodge ball, flag football and cross-country running, Zak said.
âÄúIt is a lot like what you read in the books,âÄù he said, âÄúbut without any of the magical aspects.âÄù
Various elements had to be altered to adapt the sport for muggles. Chief among them is the fact that quidditch is meant to be played in mid-air. Instead, the players run around holding broomsticks between their legs with one hand.
Another source of concern was the snitch, a small ball that flies around the quidditch pitch while a specific player, the seeker, tries to catch it. Needless to say, muggles donâÄôt possess balls that fly to and fro on their own. Instead, the seeker must retrieve a tube sock or tennis ball from the shorts of another player âÄî the snitch âÄî who is constantly running.
Trentin Tracanna, the keeper âÄî or goalie âÄî for the team GoldyâÄôs Army, said the sport can get dangerous at times.
âÄúAt 6 feet tall I am one of the shorter players on my team,âÄù he said, âÄúand body checking, tripping and wrestling are all allowed.âÄù
Muggle quidditch originated when a group of first years from Middlebury College in Vermont adapted a non-flying version of the famous magical sport in 2005. The friends designed a rulebook and began playing pick-up games on Sundays, according to International Quidditch Association commissioner and one of the original creators, Alex Benepe.
In 2007, the Middlebury team arranged the first game against another college, a quidditch team from Vassar. Since then, the students have been contacted by muggles from all over the world to start new teams and leagues, Benepe said.
âÄúPeople come to us,âÄù he said. âÄúWe give them the rulebook, give them advice on how to start teams and raise money and then help them publicize with the media.âÄù
Since then, quidditchâÄôs popularity has skyrocketed on college campuses, Benepe said. There are now teams on 200 to 300 college campuses in the United States, and IQA is in the process of expanding into South America, the United Kingdom, Australia and New Zealand.
In March, IQA became a certified nonprofit organization with an official membership program. Its goal, according to Benepe, is to continue to reach out to schools of all ages and continue the success of the sport.
Zak was one of those students, and, as a result, the University now has 10 quidditch teams, each with seven to 10 members.
SundayâÄôs tournament in front of Coffman Union was meant to determine the UniversityâÄôs best quidditch team. GoldyâÄôs Army won the tournament and a berth in the Quidditch World Cup on Nov. 13 and 14 in New York City.