UMPD’s role is steady off campus 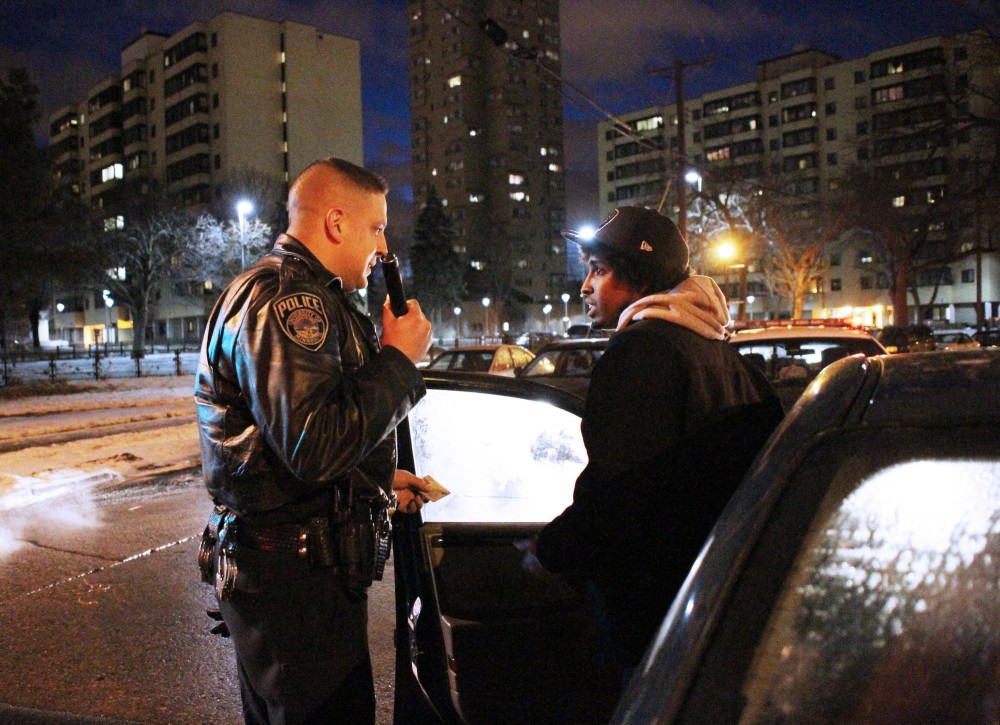 University police officer Daniel Farrar questions a man involved in a vehicle collision Friday at the intersection of Cedar Avenue and South Sixth Street. Officer Farrar said he has arrested this man in the past.

An increased need for patrols is pushing the University of Minnesota Police Department to work beyond the boundaries of campus.

Last year, 30 percent of the University policeâÄôs 30,205 service responses, which include all 911 calls and officer activities like inspections and suspicious activity investigations, were off-campus.

University police officers are not responsible for responding to calls outside of the University property. But since a majority of the schoolâÄôs more than 50,000 students live off-campus, the department still considers monitoring area neighborhoods like Marcy Holmes or Southeast Como important, University police Chief Greg Hestness said.

When University police receive calls close to campus, nine times out of 10 a University student is the caller, the victim or, in some cases, the problem, Hestness said.

âÄúWe would care whoever the victim was, but itâÄôs a little more directly related to our mission when a studentâÄôs safety is affected,âÄù Hestness said.

For many years, University police have worked closely with the Minneapolis Police Department, mostly on underage drinking prevention and keeping up-to-date on each otherâÄôs crime statistics. But in 2009, University policeâÄôs off-campus responses increased by nearly 3,500. The numbers remained consistent ever since.

The opening of TCF Bank Stadium in 2009 sparked a heavier need for coordination between the University and Minneapolis police, said Second Precinct Inspector Bryan Schafer.

The same year, he said, the departments started holding meetings together with members of the community to prepare for the impact of on-campus football games.

Many on-campus events, like Spring Jam, sporting events, Welcome Week and homecoming, directly impact crime and livability in the areas supervised by the Minneapolis police. Planning for these events beforehand has improved the effectiveness of crime prevention in the area, Schafer said.

Both departments also work with the UniversityâÄôs student liaisons, property owners and local businesses to indentify issues in the University area, Schafer said.

âÄúWe donâÄôt draw any lines. We all help one another out, and we all are responsible to make the area safe,âÄù he said.

Schafer said the partnership between the cityâÄôs, and the UniversityâÄôs police departments has drawn interest from other departments across the country.

Recently, the departments worked âÄúhand-in-handâÄù in a successful operation to combat a rash of robberies in Marcy Holmes last October, Schafer said.

âÄúIâÄôm encouraged with their participation in [response to] the crime in the area, because there are a lot of students,âÄù said Skott Johnson Dinkytown Business Association president.