Minnesota had a season-high score on vault to end the meet. 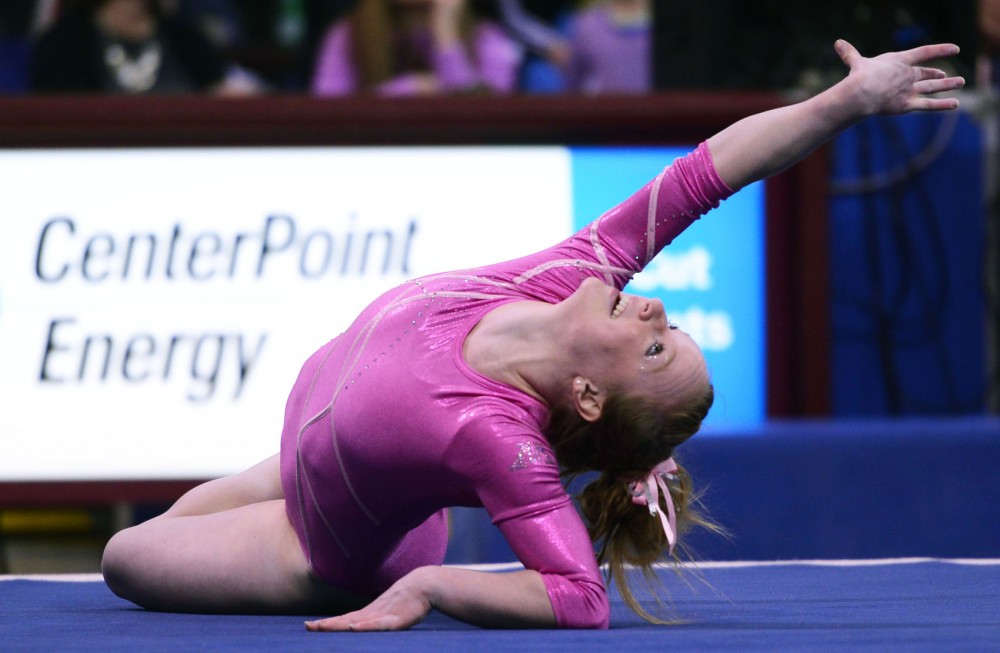 Minnesota gymnast Linday Mable competes on the floor on Saturday, March 16, 2013, at The Sports Pavilion.

The Gophers women’s gymnastics team is going back to the NCAA championships.

Minnesota finished second at its NCAA regional in Gainesville, Fla., on Saturday night to advance to its first championship meet since 2002.

Trailing Auburn entering the final rotation, the Gophers scored a season-high 49.525 on vault to secure second place, which they needed to keep their season alive.

“I’ve said it all along: They’re the real deal,” head coach Meg Stephenson said. “They were not intimidated at all, they believed in their abilities and they believed they belonged at nationals. And they performed that way.”

Minnesota’s vaults were faster than Auburn’s beam routines, meaning the Gophers had to watch and wait for the final scores to be tallied.

When the final scores were displayed, the screams, hugs and tears were on full display.

“I don’t even think there are even words to describe how amazing it feels,” freshman Lindsay Mable said afterward.

Minnesota hit all 24 routines on the night, beginning with the uneven bars.

The Gophers have struggled on bars throughout the season, but they delivered one of their best performances of the season Saturday.

Sophomore Jenny Covers led things off with a 9.8, and her teammates equaled or bettered that mark, capped by Mable’s 9.9. Freshman Madie Hanley scored a season-high 9.85.

“I think it was probably one of the most important parts of the meet,” Mable said, “because that first event sets your precedent and mindset for the rest of the time.”

Covers said the confidence taken from bars helped the team on the other three events.

Mable led the Gophers on every event and tied the all-around school record with a score of 39.6.

“I think it just really shows the quality athlete that she is,” Stephenson said of Mable. “She has just been fantastic this year.”

Despite the Gophers’ so-so performance on beam, Stephenson said she felt good about their chances to advance as they entered a bye rotation halfway through the meet.

Minnesota went on floor exercise after the break and produced the second-best score of the six teams, but Auburn held an edge over Minnesota after three events.

Stephenson said she told her gymnasts before the vault to “let it rip” because it could have been their final event of the season.

“They stuck the landings, and that made the difference,” Stephenson said.

Minnesota had all six gymnasts score 9.85 or higher on vault. Mable and senior Shannon Golich scored season highs. Mable and Covers tied for the individual title with scores of 9.95.

“I think it was cool to see everyone fighting for every little tenth,” Mable said. “Every little thing mattered.”

Minnesota will have two weeks before competing at the NCAA championships in Los Angeles. Fellow Big Ten schools Michigan and Illinois also made the field of 12 teams.

—Minnesota competed at the Stephen C. O’Connell Center for the second time this season Saturday. Minnesota scored 197.175 on March 1 in a loss to Florida.

—Florida swept the top-five spots on floor exercise, the-top three spots on bars and the top-two spots on beam.