Cases of syphilis, gonorrhea in Minnesota rose significantly in 2016

A report from MDH shows double-digit increases in syphilis and gonorrhea. 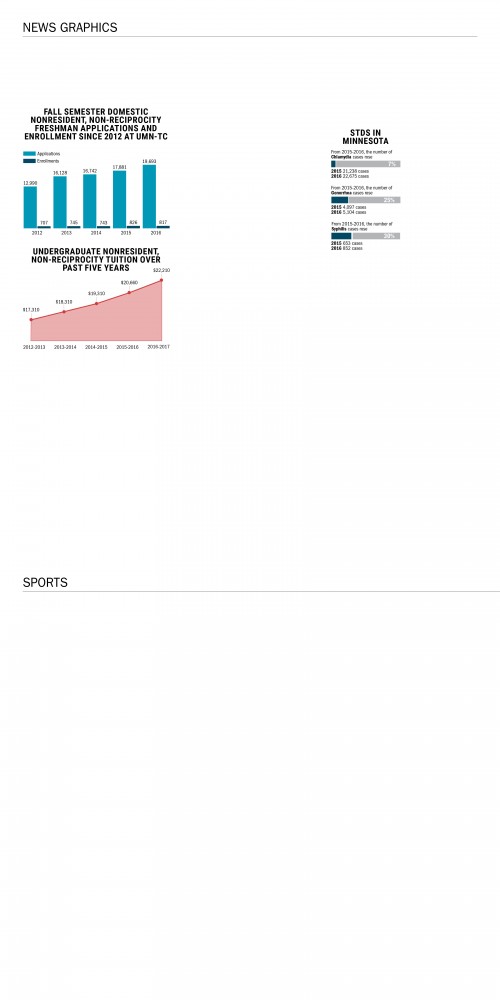 Health professionals say the increase, part of a 4-year trend, is the result of a decline in condom use and a lack of education.

At the University of Minnesota, 52.5 percent of students used a condom the last time they had vaginal intercourse, according to a 2015 Boynton Health survey.

Syphilis infections rose by 58 percent in greater Minnesota. There were also reports of infections in females of child-bearing age, though most infections are seen among males, particularly men who have sex with men.

“It’s in broader communities now,” Guerard said. “It’s a very large increase. Syphilis nationally is going back up compared to what it used to be.”

She said MDH is educating more people and providers on syphilis than ever before.

“It’s all about getting tested and actually knowing what your STI status is,” Guerard said.

To provide greater access to testing for youth, MDH partnered with Community Restoring Urban Youth Sexual Health, an organization that works with clinics around the state to educate and provide youth with low-cost testing.

University master’s student J’Mag Karbeah, a CRUSH coordinator, said that many people won’t know they have an STI until they try to have children. Gonorrhea and chlamydia frequently show no symptoms.

“You can be infected, you can get other partners infected with no intent,” Karbeah said. “But you’re just unaware of the fact that you have an infection.”

Left untreated, gonorrhea and chlamydia can cause pelvic inflammatory disease and reproductive complications in women, she said.

People aged 13 to 25 and communities of color are the most likely to be infected with an STI, Karbeah said

CRUSH’s goal is to tell young people that STIs are treatable and get them tested once a year, as recommended by the Centers for Disease Control and Prevention, she said. Karbeah said MDH’s 2016 data is “disheartening,” showing 22,000 new gonorrhea and chlamydia cases.

Keith Horvath, an epidemiology professor, said it’s important to make sure gay and bisexual men — the demographic with the highest STI rate — are getting the necessary education and can be proactive about their own sexual health.

“That’s always a perennial issue with young folks,” he said. “The other thing is just changing … attitudes and norms around having protected or unprotected sex.”

Horvath said the stigma surrounding gay or bisexual men and seeking care for their sexual health can keep them from getting help, something he said he hopes will change.

“Something we should be thinking about is how do we engage, especially youth, in these topics?” he said. “How do we really tailor those messages and get youth involved and aware?”