After a preseason illness, Nikki Anderson has settled as the Gophers' No. 2 starter. 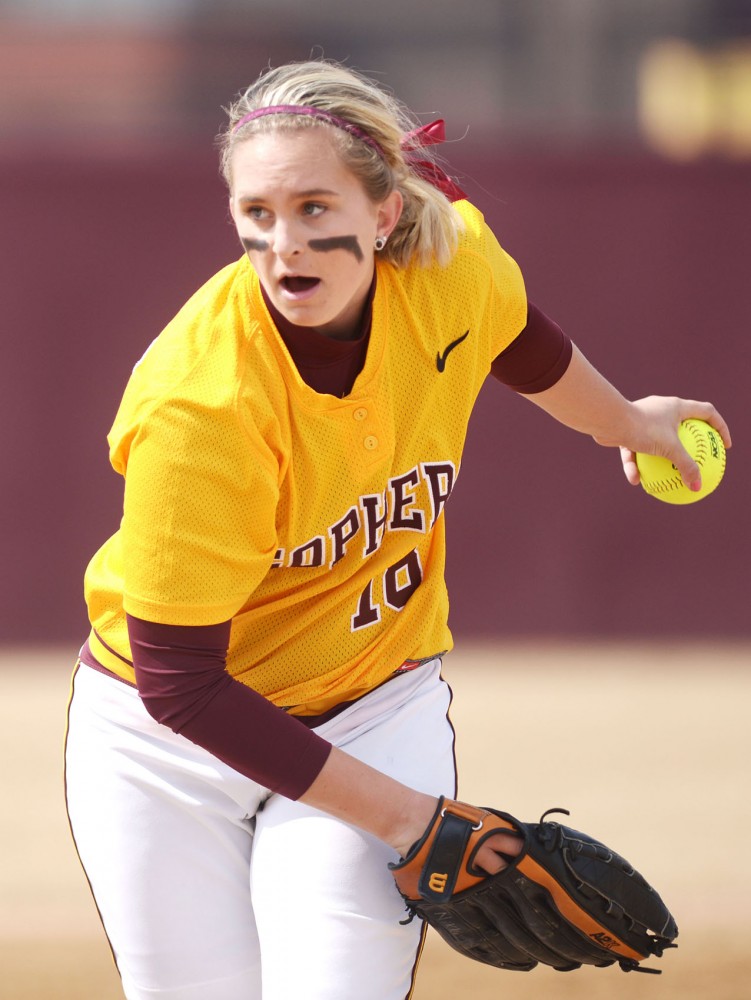 Life threw freshman Nikki Anderson a curveball a week before she had the chance to throw one for the Gophers.

“I went to the ER for what felt like a heart attack,” Anderson said.

She had gallstones, pieces of solid material that form in the gallbladder and can block the flow of acids through the intestines.

She needed surgery to remove her gallbladder right before Minnesota’s opening weekend.

She was back on the mound a week later.

The Brainerd, Minn., native has settled in as a reliable No. 2 starter behind Sara Moulton for Minnesota this season. She has a 2-2 record during Big Ten play and a 4-3 record overall.

Assistant coach Piper Ritter said Anderson seems to be “coming into her own” during conference play after a couple of rough nonconference outings.

“It didn’t take her very long to bounce back,” he said.

Head coach Jessica Allister said Anderson had lost most of the strength she had built up during the preseason, but she has shown “a vast improvement” over the past month.

“We knew it was there,” Allister said. “It was just a matter of her getting back to the form that she was in.”

Anderson was a standout at Brainerd High School, where she was named Minnesota’s Ms. Softball and Minnesota’s Gatorade Softball Player of the Year in 2012.

Though most of the players on the Gophers’ roster are either from the Twin Cities metro area or out of state, Anderson was on Allister’s radar right away.

“We kept hearing about a hard-throwing lefty up in Brainerd,” she said.

But Allister and Ritter had a tough time scouting Anderson because Minnesota’s high school softball schedule aligns with the Gophers schedule.

While a short drive to watch a player in the metro area was feasible, a four-hour round-trip up north was not.

“Minnesota’s high school softball [season] is really short and compact,” Ritter said. “And then everyone goes out and plays summer ball. That’s where they continue where they left off in high school.”

Ritter finally got a good look at Anderson at a national tournament in Tennessee.

“I liked her feistiness,” Ritter said. “She competed with every batter.”

Anderson made an immediate impact during her first semester at Minnesota. Allister said she made tremendous strides in the weight room during her fall semester, which translated to her success in the pitching circle.

In a way, Anderson ending up at Minnesota makes perfect sense — her grandfather won a national championship with the Gophers baseball team in 1956, and her aunt is a member of the Minnesota Softball Hall of Fame.

“When coach Allister contacted me, I definitely knew this was where I wanted to be,” Anderson said.