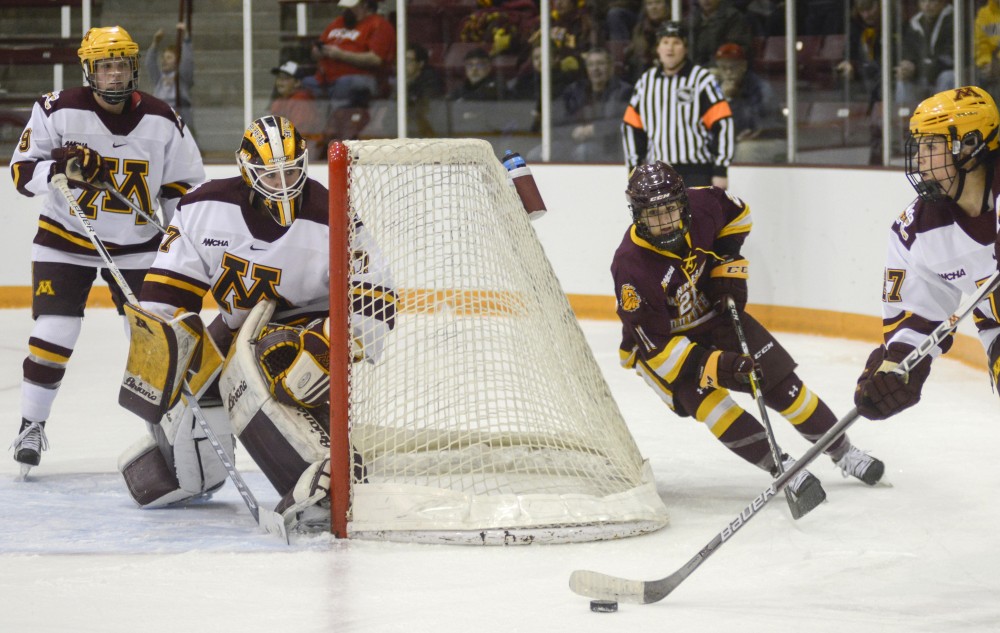 Redshirt junior goalkeeper Sidney Peters defends the goal from the Bulldogs on Feb. 4, 2017 at Ridder Arena.

Playing two goaltenders is a problem head coach Brad Frost is fine having.

Redshirt senior Sidney Peters and freshman Alex Gulstene have both seen quality ice time this season as the Gophers are 5-2-1 on the season and starting to get hot after sweeps of Bemidji and Duluth on the road. Peters has played in four games this season and won three, while Gulstene has played in five games and holds a record of 2-1-1. Peters has a save percentage of .909, while Gulstene holds a percentage of .915.

“We are really confident when we have Peters or Gulstene in net on any given night,” Frost said. “That goaltending position is not easy, but there is some good healthy competition there and they are both playing well.”

Last year, on the way to the Frozen Four, Peters played in 37 games and had a save percentage of .917 and a goals against average of 1.66. She finished the season with a record of 25-8-4 and looked to have a pretty firm lock on the position going into the year.

She had offseason hip surgery and knocked out the rust in the first month of the season. Still, she finds herself in a competition for ice time with the highly touted recruit, Gulstene.

“When I was a squirt or pee wee I wasn’t super worried about ice time or any of those things,” Peters said. “That is my focus right now, when I am on the ice I’m having fun and enjoying my teammates, and when I’m on the bench, I’m just enjoying being a part of something special.”

Gulstene comes into Minnesota with a decorated past. The Vancouver, Canada native, who holds citizenship in both Canada and the U.S., won two gold medals in 2016 and 2017 playing for the U.S. in the U-18 Women’s World Championships. During those world championships, she was named one of the three best players from the U.S. She also played for the Okanagan Hockey Academy where she won the league championship with one of her teammates here at Minnesota — Olivia Knowles.

The goalie has shown she can compete with NCAA talent, too.

She has a goals against average of 2.16 and a total of 107 saves to lead the team in that category. A highlight from her early career is when she stopped nine pucks in overtime against Ohio State to help the team fight off a strong attack from the Buckeyes and win earlier in the season. She understands that ice time will be shared and looks forward to the challenge.

“I prefer to be playing, everyone loves to play, but whatever situation I am in is the best situation for me,” Gulstene said. “I’m out here to support [Peters] in every way I can and do my best to fulfill my role for the team.”

Both of the goaltenders are coming off weekends where they were at their best. On Friday night, it was Peters who got the call and delivered. She had 35 saves on 36 shots, helping the Gophers to a 4-1 victory. Gulstene got the start on Saturday night in Duluth and delivered 26 saves to help the Gophers stay within one before their comeback effort began.

As for the rest of the season, Frost isn’t going to change what is working.

“I would love to have two great goalies and have that problem,” Frost said. “Right now, they are playing great and we have that good problem.”