Leidner outshined by Barrett in 31-24 loss

Minnesota narrowly lost to Ohio State on Saturday, but the gap between each team's quarterbacks was wide. 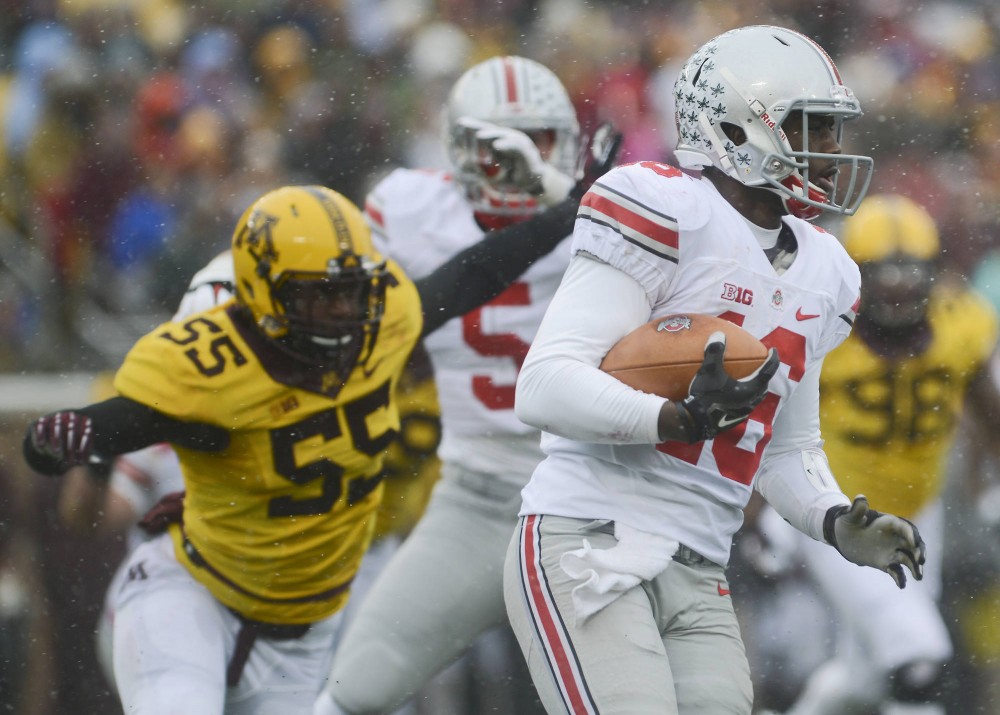 By the time the Gophers escaped the snow and filed through TCF Bank Stadium’s tunnel toward their locker room, they had come within a play or two of beating one of the best teams in the nation.

But when Minnesota (7-3, 4-2 Big Ten) narrowly lost to Ohio State 31-24 on Saturday, there was a sizable gap between each team’s quarterback.

Mitch Leidner completed seven of 19 pass attempts for the Gophers to finish with just 85 yards, throwing two interceptions along the way.

Ohio State’s J.T. Barrett was 15-for-25 for 200 yards, three touchdowns and just one interception. The redshirt freshman was equally as effective with his legs — burning the Gophers for 189 yards on the ground.

“I thought there were good signs of life in our defense and special teams played great. I’ve just got to pick it up. I’ve got to be better,” Leidner said.

When Buckeyes quarterback Braxton Miller went down with a season-ending shoulder injury in late August, it didn’t look like preseason No. 5 Ohio State had a shot at the national title or the Heisman Trophy anymore.

As a replacement, Barrett was thrown into the fire and struggled mightily in a week two loss to Virginia Tech.

But now Ohio State (9-1, 6-0 Big Ten) has a legitimate shot at the College Football Playoff and Barrett looks the part of a Heisman finalist.

“Early in the season we had no idea who J.T. Barrett was. We have a very clear picture now,” Ohio State head coach Urban Meyer said after the game.

The Gophers defense forced the Buckeyes to go three-and-out in its first drive, but Barrett fooled them the next time around by faking a pitch to running back Ezekiel Elliott.

Senior linebacker Damien Wilson bit on the fake and lunged to the right side of the field, while Barrett burst through a gaping hole with the ball and outran Minnesota’s defensive backs for 86 yards and six points.

“Braxton Miller is one of the better quarterbacks in the country, if not the best. This kid is more of a dual threat because of his throwing ability and he has the same athletic ability,” Gophers head coach Jerry Kill said.

Despite the early breakdown, Minnesota’s defense had moments of brilliance.

Defensive back Briean Boddy-Calhoun intercepted Barrett late in the first quarter and returned it for 56 yards to stop the Buckeyes from blowing the game open.

In the second quarter, Boddy-Calhoun forced Buckeyes running back Jalin Marshall to fumble and linebacker De’Vondre Campbell recovered it in the end zone.

Minnesota’s offense capitalized and tied the game up at 14 on the next drive behind a 30-yard David Cobb touchdown run. Cobb finished with 145 rushing yards and three touchdowns, but the Gophers offense couldn’t get much more production.

Leidner was strong in weeks leading up to the Ohio State matchup, completing deep play-action passes to multiple receivers. Going against the speedy Buckeyes, it was another story.

“Their safeties play a lot further back and any time they see pass they take off,” Leidner said. “It was just tough to hit anything deep against those guys.”

Barrett didn’t have as much trouble. His second touchdown of the game was a 57-yard pass to Marshall.

The Wichita Falls, Texas, native stretched Ohio State’s lead with two more touchdown passes of 22 and 30 yards in the second half.

Then he iced the game with rushes that ran out the clock.

While Barrett willed the Buckeyes past the Gophers, Leidner struggled to get anything going.

He was without deep-threat receiver Donovahn Jones, who Kill said was held out of the game mainly for disciplinary reasons.

The Gophers can still advance to the Big Ten Championship Game if they win their next two games against Nebraska and Wisconsin.

But in a contest dominated by one quarterback, Leidner’s play was another reminder that Minnesota’s subpar passing attack is holding it back from being a conference title contender.

“That just can’t happen by me,” Leidner said, referencing an overthrown pass to KJ Maye.“Same with turning the ball over. I’ve got to get better.”