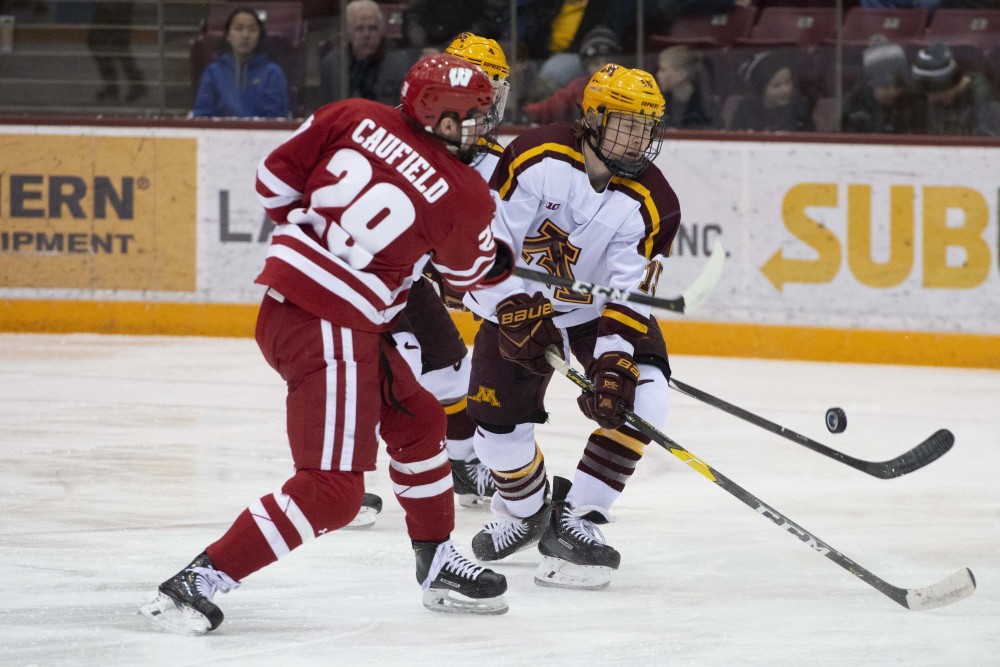 Junior Rem Pitlick works to keep the puck away from Wisconsin on Friday, Jan. 25 at 3M Arena at Mariucci.

The border battle had become a one-sided affair in recent months, as P.J. Fleck and the football team went into Madison and trounced the Badgers in November. That was followed two months later by the men’s basketball team knocking off their rivals on the road.

“We had plenty of chances to stretch the game, we just made three critical mistakes,” head coach Bob Motzko said. “It was a tough hockey game.”

Motzko described the mistakes as “elementary,” alluding to two missed back checks and a missed puck off the stick.

Minnesota kicked off the scoring barrage in the first period. Rem Pitlick worked his way through the Wisconsin defense and into the slot, found an opening on the glove side and put it away for his 14th goal of the season.

The Badgers answered in the second period with two scrappy goals, getting ahead 2-1. The first came as the puck got lost under goaltender Mat Robson and snuck past him. The second followed a large scrum right in front of the goal. As the puck squirted out, Wisconsin forward Linus Weissbach was there to put it away.

The Gophers were able to answer quickly to halt the Badgers’ momentum. Moments into a power play, Brannon McManus found a streaking Brent Gates Jr. in the slot. Gates corralled the puck and beat Wisconsin goaltender Daniel Lebedeff under the glove.

The Gophers and Badgers exchanged goals once again in the second period. Pitlick lit the lamp for the second time in the game for the Gophers, and Mick Messner caught the Gophers’ defenders sleeping and slipped behind the defense to tie the game at 3-3.

The game-winning goal came early in the third period as defenseman Peter Tischke found an open window in the slot and buried it for the 4-3 lead.

Rem Pitlick continued his strong play. He scored twice in the game, and for the seventh time in as many games, Saturday’s game brought his season total to 15.

“You know what you’re getting out of Rem [Pitlick], he’s so consistent,” senior forward Tyler Sheehy said. “He brings our line to the next level and he can do just about anything out there. He could’ve had five tonight.”

The power play shone for the Gophers Saturday as they converted on their first three power play chances but couldn’t convert after that, finishing 3-5.

“We got to do a better job 5-on-5. Obviously, we can’t have all our goals on the power play and that cost us tonight,” Sheehy said. “They were blocking a lot of shots … that’s what a good penalty kill does.”

The Gophers were without one of their top forwards because Sammy Walker was out with an undisclosed injury.

“It’s a big loss for us,” Motzko said. “He and Rem [Pitlick] have been two of our most dynamic players night-to-night.”

“I’ve played a lot of games here and there have been some good [crowds],” Sheehy said. “They were loud and they were into it and that’s always fun when you can get the student section into it and getting rowdy.”

With the loss, the Gophers have lost 3 of 4. The team will be searching for answers next weekend as they take on Michigan at home.

“I think we are right there, we’ve seen it from our group,” Pitlick said. “Sometimes we have it, sometimes we don’t but we are just trying to put an emphasis on the end of the year, we got to play our best hockey then so that is what we are working towards.”