Minnesota rushed for its highest total since Sept. 20, 2008 on Saturday. 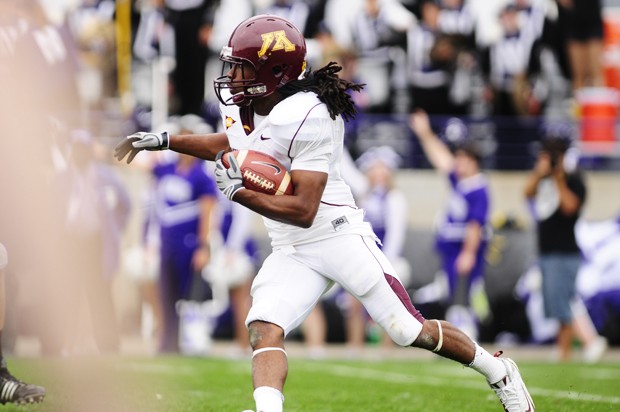 When the Gophers lost five games in a row to end last season , head coach Tim Brewster knew there was something wrong. He tried to correct it by adding another coach before MinnesotaâÄôs 42-21 loss to Kansas in the Insight Bowl , but the improvement was nominal. Then, for an entire offseason, the problem stared the entire program in the face: the great strength of previous Minnesota football teams âÄî running the ball âÄî had become its greatest offensive weakness. In their last five games of 2008, the Gophers rushed for an average of 67.4 yards per game (2.4 yards per carry) , which was a trend Brewster wanted to stop. He entrusted new offensive coordinator Jedd Fisch and offensive line coach and running game coordinator Tim Davis with the task of changing MinnesotaâÄôs spread offense to a multiple-set offense that could run the ball with consistent success. Through three games this season, however, the GophersâÄô running game appeared to be a forced effort with meager results. That changed Saturday at Northwestern, as the Gophers rushed for 166 yards âÄî their highest total in more than a year âÄî in a 35-24 victory. âÄúWe wanted to run the ball; we wanted to emphasize that we wanted to be more consistent,âÄù junior quarterback Adam Weber said. After finishing last in the Big Ten in rushing a season ago , the Gophers were pleased with the long-awaited breakout performance. âÄúWeâÄôre committed to running the football, and we ran the football very well today,âÄù Brewster said after SaturdayâÄôs win. âÄúWe played the game the way we wanted to play it.âÄù Sophomore running back Duane Bennett led the Gophers with a career-high 21 carries for 89 yards and three touchdowns , bringing his season total to four rushing scores, also a career high . âÄúWe know as a team we can run the ball,âÄù Bennett said. âÄúItâÄôs just a matter of us actually getting out there and being able to run it against another team.âÄù Bennett was complemented by redshirt freshman running back Kevin Whaley (five rushes for 31 yards ), true freshman quarterback MarQueis Gray (five rushes for 33 yards ), and junior fullback Jon Hoese , whose two carries gained two fourth-quarter first downs . âÄúI thought that all those running backs ran hard, ran well, but it was the offensive line play that allowed them to do the things that they did,âÄù Brewster said. âÄúMy hatâÄôs off to our offensive line.âÄù That is hard-earned praise for MinnesotaâÄôs offensive line, which has taken its share of the blame for running-game struggles and quarterback-protection problems the last two seasons. âÄúEverybody always says it starts up front, but some things were on the running back, some things were on the [offensive line],âÄù Bennett said. âÄú[But we] decided to change our ways and really show that we can run the ball.âÄù Bennett, Whaley, Gray, Hoese and sophomore running back DeLeon Eskridge give Minnesota plenty of options and Big Ten opponents a few more running styles to which they must adjust. Brewster declined to say Sunday that any one player had solidified his role in the GophersâÄô backfield. Nevertheless, SaturdayâÄôs game showed the benefits of a reliable running game. First, the Gophers sustained drives by running the football, as 12 of their season-high 22 first downs came on the ground . Second, they succeeded on third down. Saturday was by far MinnesotaâÄôs best single-game performance on third down this season. They converted 8-of-14 opportunities, including 5-of-6 in the fourth quarter . They also set up and converted short third down plays, succeeding on six of seven third downs of fewer than three yards . Third, the Gophers were able to run out the clock in a close game, holding the ball for over 12 minutes in the fourth quarter. Minnesota ran on nine of the 13 plays in the go-ahead scoring drive and later gained two critical first downs on a four-minute drive in which six of the seven plays were rushes . Lastly, they diverted the focus of the opposing defense away from other offensive playmakers. The Gophers didnâÄôt need another 100-yard receiving game from senior wide receiver Eric Decker (although they did need his two touchdown catches ) to win Saturday. The running game demanded so much attention that Decker was wide open for a 16-yard touchdown reception in the third quarter . Even Decker âÄî who has more than half of the teamâÄôs receiving yards and touchdown receptions âÄî knows a consistent running game will be vital to the GophersâÄô success this season. âÄú[It] seems like week to week, weâÄôre moving the ball; weâÄôre able to put drives together in the first half now and finish in the second half,âÄù Decker said. âÄúFor a football team to win a Big Ten championship, youâÄôve got to do that consistently on offense, and thatâÄôs what weâÄôre striving for, and weâÄôre getting there.âÄù