The band blends indie rock and funk, bringing intimacy and passion to their sold-out sets. 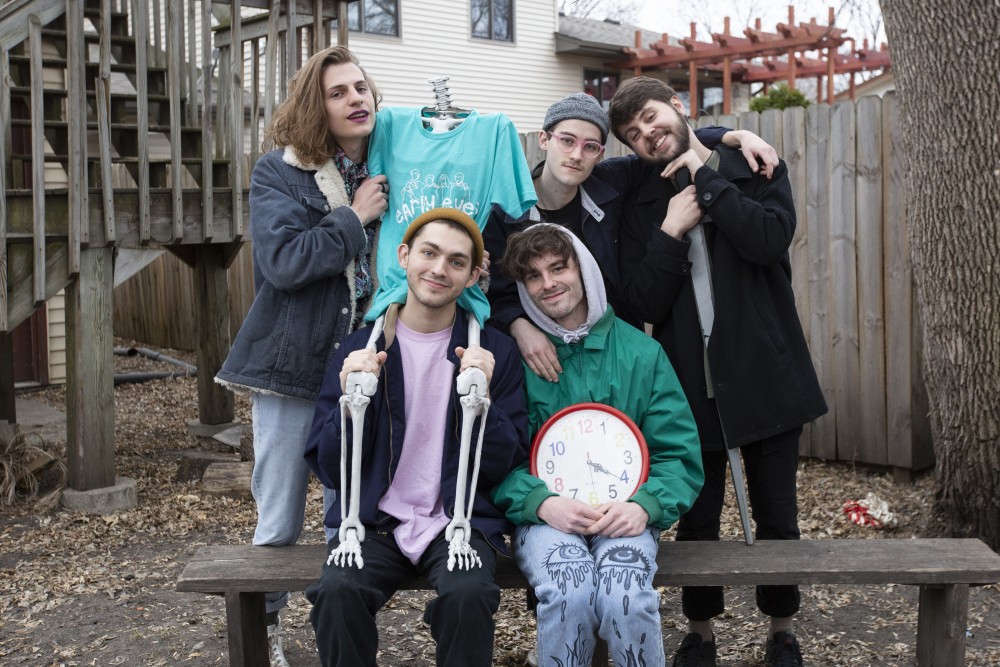 Early Eyes poses for a portrait in their Northeast Minneapolis backyard on Thursday, April 4.

At the Fine Line on Friday, the drums boasted the characteristic logo of an eye with five lashes, a hint at the next band to take the stage.

After rocking out to local girl group Last Import, fans waited anxiously for Early Eyes to begin their set.

Filled with funky energy and a grooving rhythm, the band connected with the crowd almost instantly. Sprinkling in new songs with some of their older hits, it was almost impossible to watch while standing still.

Nearly halfway through their set, the group paused for a quick introduction before getting straight to what fans came out to see:

Early Eyes (made up of Jake Berglove, Des Lawrence, Joe Villano, John O’Brien and Wyatt Fuller) started out as a pop-up band. Music-making was something the group of mostly former University of Minnesota students would do for fun outside of classes.

But after getting a positive reaction from their first couple of shows and selling over 300 tickets to their gig at the Paper House in 2016, the five realized this could be something much bigger than a hobby.

“Yeah I think it was after our third show [when] we were like, ‘Guys, when are we going to drop out?’” laughed bassist Lawrence.

Living in the dorms made it difficult to get instruments and sound equipment to shows. The band had to resort to other means to make it work.

“We had no van. We didn’t even have, like, a car. We were taking our gear on the fucking Green Line,” Berglove said. “We’d steal the moving carts from Middlebrook Hall and throw all of our shit on it and walk it across Minneapolis. That’s what we did. We took it to the Triple Rock sometimes, just walked it through West Bank, full of music shit.

Since then, Early Eyes has played sold-out shows at First Avenue and performed at the Basilica Block Party. At the end of the month they’re heading out on a national tour, hitting places like Washington, D.C., Atlanta and Cleveland.

“We’re so lucky because we’re the 1 percent of the 1 percent of bands that get to go on tours and have a manager and all that shit,” Berglove said. “It’s really nice and flattering [but] also really weird to come to terms with because you’re always like, ‘What … us?’”

Many Early Eyes members said it’s a new feeling to be recognized by fans while at work or while sitting in a coffee shop (although they do encourage you to come over and say “hi”).

“We’re so un-intimidating you probably saw us trip over nothing and [walk] into a door,” assured guitarist O’Brien.

Christian Roreau, the band’s manager, said Early Eyes was the first band in a while to make him stop and go huh.

“It’s just a different world [fans] sort of escape to when they’re watching their favorite performers [live],” he said. “And those guys put forth an energy that people like, I guess. It’s a bit intangible — some bands connect with the audience, some don’t. And there’s still a ton of work to do for this band, but there’s definitely some sort of spark [there].”

Although Early Eyes continues to gather new followers and listeners, the band says many fans have been with them since the beginning.

“I think the magic is being on stage and looking out and seeing faces that you saw last time,” said O’Brien. “The room got a little bit bigger and a little more compact, but it’s cool to know that … we’re involved with a community to the degree that they will show up to shows regularly. It feels very remarkable to be a part of that.”