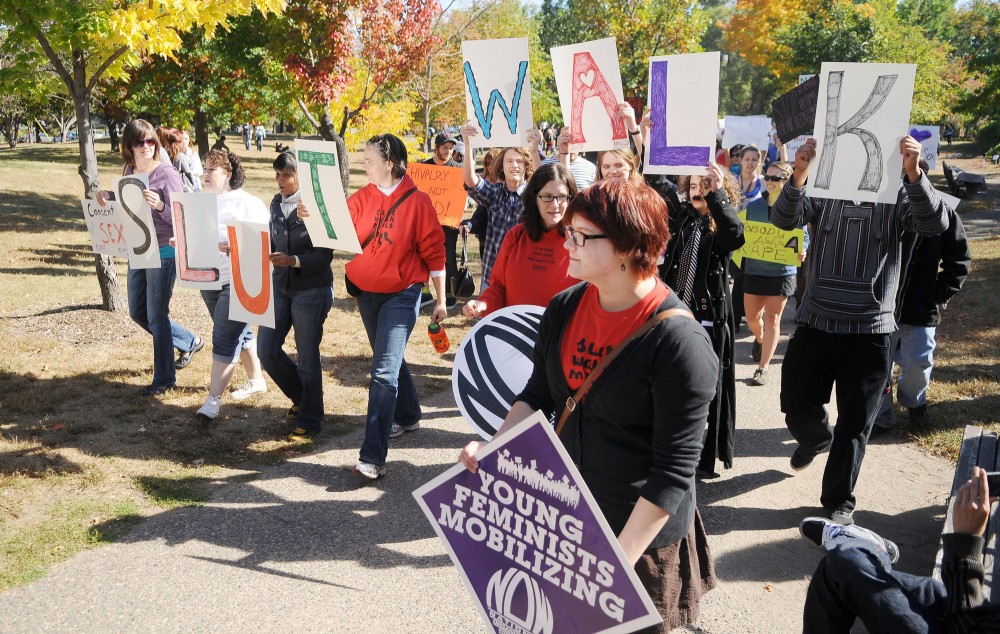 Several hundred people paraded through the streets of Minneapolis to protest against sexual violence in the cityâÄôs first annual SlutWalk on Saturday.

From low-cut leather tops and fishnets to men in dresses, many wore revealing clothes and held signs as they walked the 1.8-mile route along the Mississippi River to rally against blaming victims of sexual violence because of how they dress.

SlutWalks around the world encourage participants to dress up in wild clothing to protest sexual violence.

The first SlutWalk was held April 3 in Toronto, triggered by a Toronto police officer who said that women could avoid being victimized if they didnâÄôt dress like âÄúsluts.âÄù

âÄúThereâÄôs a wide variety of people here, and a lot of them really pushed the boundaries with their apparel,âÄù said spring University of Minnesota graduate Valerie Hurst . âÄúClothes like these really make an impact on people and push our message to end sexual violence.âÄù

The movementâÄôs Minneapolis chapter began in June 2011 and has been using social media to raise awareness.

âÄúWe had a great turn out, but we canâÄôt stop after this event. We must continue supporting, influencing, and educating people about sexual violence,âÄù Sherva said.

Many were opposed to the event because of the word slut, Giuliano said, but there were no counter-protests Saturday.

St. Paul resident Kristine Holmgren, executive director of the Dead Feminists Society of Minnesota, told the Associated Press that women who call themselves âÄúslutsâÄù are undoing feministsâÄô work in the 1960s and 1970s to stop men from referring to women as âÄúchicks.âÄù

âÄúWhen we buy the language of a patriarchy, then we all lose,âÄù she said. âÄúGirls trot around in bikini tops and say: âÄòLook at me! IâÄôm a whore.âÄô How does that make my world better?âÄù

-The Associated Press contributed to this report.