Minnesota won the American Campus Classic with three wins over the weekend. 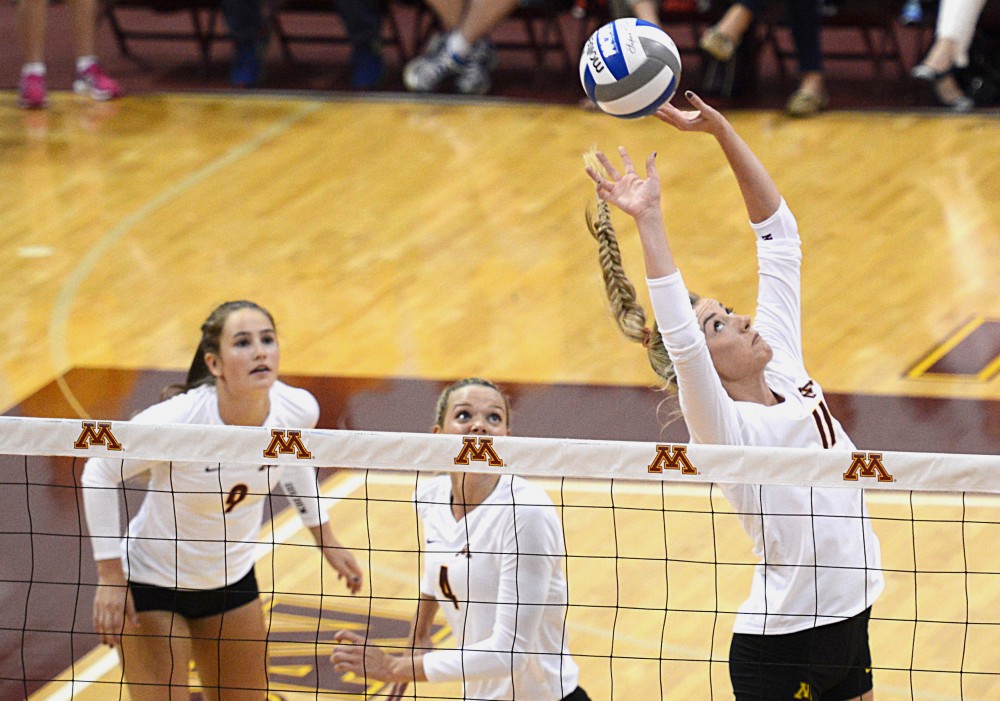 Gophers sophomore Samantha Seliger-Swenson sets the ball on Sept. 23, 2016 in a match against Maryland in the Sports Pavillon.

In an early preview of what could potentially become a late-round NCAA tournament matchup, the No. 1 Gophers defeated the No. 5 Longhorns 3-1 in Austin, Texas.

“[I’m] just really proud of the team, [we] came back to execution,” said head coach Hugh McCutcheon. “When we did get into trouble, we were able to figure a way out of it.”

Playing in four total sets, the scoring remained close in the first three as the Gophers (8-0) won the set one 25-21. Texas (6-2) rebounded in the second set, winning 27-25 after faced with two set points by the Gophers.

Minnesota bounced back in the third set, winning 26-24 in a back-and-forth battle. The Gophers pulled away in the fourth set, winning 25-19, and sealing the match victory.

Opposite hitter Stephanie Samedy led Minnesota with 22 kills, also finishing with a team-high 23 points and hitting .308 on the evening.

“It shows what we’re capable of as a team; they had a crazy environment,” Samedy said. “It was loud, it was packed, but we managed to stay together as a team.”

Middle blocker Molly Lohman had a momentum-building kill in the first set after an alternating point that lasted several rallies.

“It’s incredible, we’re grinding there every single point,” Lohman said. “And those long rallies, at the end of it either way each team had so many great plays that you are happy to come out on top.”

This was the second top-25 win for Minnesota this season, with the team also beating then-No. 11 North Carolina in their first match of the season.

Texas played in last year’s NCAA championship game, losing 3-1 to Stanford, who had defeated Minnesota in the semifinals.

Minnesota heads to Boise, Idaho next week, to play three games in a tournament at Boise State.