No. 3 Minnesota defeated No. 5 Wisconsin in Madison after a slow start. 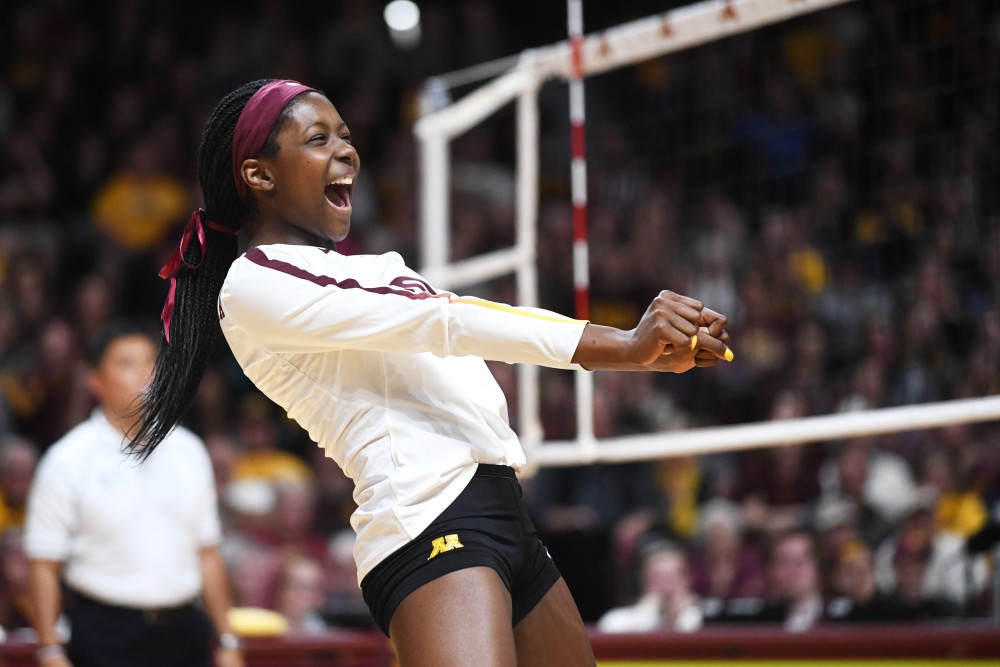 Freshman Adanna Rollins celebrates after the gopher's score against Iowa on Friday, Oct. 19, 2018 at Maturi Pavilion.

After a first-set spook, the Gophers came back from the dead to beat the Badgers on Halloween night.

Although the start of the match went Wisconsin’s way, the Gophers fought back and took the match.

“Wisconsin obviously played well but we just had to make the adjustment on our side of the net,” setter Samantha Seliger-Swenson said.

Although Wisconsin began the set with the first point, the Gophers took a slight 4-2 lead after two kills by middle blocker Taylor Morgan. The Gophers extended their lead to 10-6 off a well-balanced offensive attack but Wisconsin took over from there.

The Badgers went on a 7-1 run to take the lead 13-11. The Badgers never looked back as they sailed through the rest of the set giving the Gophers their third set loss in Big Ten play this season, this time the score was 25-16. Minnesota’s hitting struggled as it hit .075 in the opening set.

In the second set the Gophers came back firing. Minnesota took a quick 5-3 lead after two service errors by Wisconsin and a powerful kill by opposite hitter Adanna Rollins.

The Gophers went on a commanding 7-2 run and took a dominating 12-5 lead. Throughout the run, four different players had kills.

Although Minnesota was dominating early, Wisconsin didn’t quit and closed the deficit to five, making the score 15-10. The Badgers went on a 5-2 run of their own, cutting the Gophers lead down to two points.

The set went back-and-forth, but opposite hitter Stephanie Samedy took over the set as the Gophers won 25-22. Rollins and Samedy both led the Gophers with four kills in the second set.

The third set started as a battle for every-point as the Gophers took a slight 6-4 lead over the Badgers.

The set continued to be neck-and-neck as the score was tied 8-8. Minnesota after two powerful kills by the Gophers put Minnesota ahead 10-9.

Minnesota didn’t break free until they went on a 6-1 run later in the set led by four kills by Rollins. The Gophers proved too much for the Badgers, as they closed out the set 25-19. Rollins continued on her success and had six kills in the set.

“My teammates help me feel comfortable and remind me that they need me, so I just really try to show up,” Rollins said.

It was a fight for every point in the final set of the match — as expected between a duel between top-five teams.

The two teams exchanged points throughout the start of the set as the Gophers led 9-8.  Wisconsin did not quit though showing their urgency to get a victory as the team reclaimed the lead 11-10.

Later in the set the Gophers finally broke away from the Badgers after a four-point run that put them ahead 19-15. Although the Badgers fought back, it was not enough to stop Minnesota from taking the final set 25-19.

The offensive surge that began in the second set was due to the well-balanced attack led by Seliger-Swenson who had 56 assists on the night.

Rollins finished with 17 kills and 16 digs making it her fourth double-double of the season.

“People say she’s a freshman, but she definitely doesn’t act like one or play like one,” Seliger-Swenson said.

The Gophers will return to action Friday when Michigan State travels to Minneapolis.