In her fifth year with the program, Morgan has become the self-proclaimed "grandma," of the team. 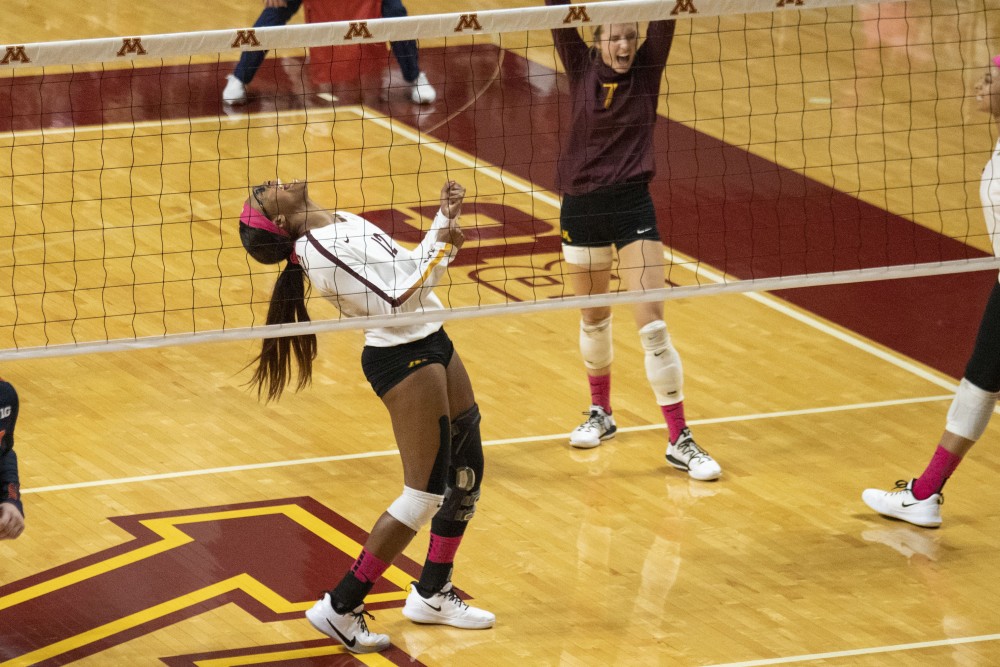 Middle Blocker Taylor Morgan celebrates a scored point at the Maturi Pavilion on Saturday, Oct. 19. The Gophers defeated Illinois three sets to one.

Even so, the Gophers’ redshirt senior middle blocker is looking to change her approach. In her final season, Morgan wants to soften her style and take a step back. She wants to be the leader that listens before taking charge, the leader her teammates can come to and know she’ll have their back.

Morgan’s relationship with her sisters is one of the factors that led to this change of philosophy. She said she’s grown closer to her sisters over the course of her collegiate career and wants to be there for them, be their “soft place to land on.” She wants to be that for her teammates as well. That being said, when the team needs her to step up, Morgan won’t hesitate. If the team has their backs against the wall, Morgan can often be seen firing them up.

“It is something that when in doubt, I’m going to just do it,” she said. “I don’t know if that’s a good thing or a bad thing, it’s just how I am I guess.”

Morgan is learning to pick her spots, knowing when the team needs her tough love and knowing when they need that soft place to land on. The self-proclaimed “grandma” of the team wants them to know, when she cracks the whip, it’s with the best of intentions.

“They’re my girls. I love them to death,” Morgan said. “I love them all to death, and I know sometimes it doesn’t come across because I am so headstrong, disciplinarian, leader-type of person. But my intentions are, ‘I just want the best for you, and I know you can do it and I’ve seen you do it. I just want you to believe in yourself as much as I believe in you because you’re a freaking legend.’ I love my team so much. I really do. I need to show that more and say that more.”

Morgan’s love for her team is evident, and she’s carrying that into her academic interests. Morgan is a youth studies major and hopes to be a coach later in her career. Currently, she is an intern with Maroon and Gold Impacting the Community, or MAGIC, a program which gives student-athletes at the University community service opportunities. The internship gives her the opportunity to mentor younger student-athletes, which helps her in her goal to become a coach. Morgan wants to test the waters playing overseas before pursuing coaching, but she isn’t thinking about all that quite yet. For now, there’s still the rest of the season to be played, and she’s taking it one day at a time.

It’s bittersweet for Morgan as her final semester nears a close. She said she has loved her time at the University of Minnesota and considers it a “home away from home.” Both of her parents work at the University, and Morgan has experienced many moments she’ll never forget, including two Big Ten championships. The feeling of returning to campus after every away match is one she never gets tired of.

“When we travel, we’ll go to another campus, and then we’ll come back here. I still get the same chills,” she said. “Maybe it’s because it’s like 32 degrees outside that I’m getting chills. You never know, but I still love the University of Minnesota. Always been a Gopher and always will be.”

Morgan has had her difficulties in her volleyball career. She’s dealt with four knee surgeries and missed the 2015 season due to injury. That was a challenge for Morgan early, as she was still trying to develop an identity outside of volleyball. In 2019, she views things differently. She’s learned how to take life’s challenges and come out stronger. She also came out with “a couple cool scars” on her knees.

“I think those are like my testimonies,” Morgan said. “Without a shadow of a doubt, if I didn’t go through all that I don’t think I’d be the woman I am now or still be here because those injuries taught me how to keep pushing and to never give up.”

As her final semester comes to a close, Morgan has one more big goal: to bring a national championship back to Minnesota.