The students of the University of Minnesota work toward their ultimate runway goal. 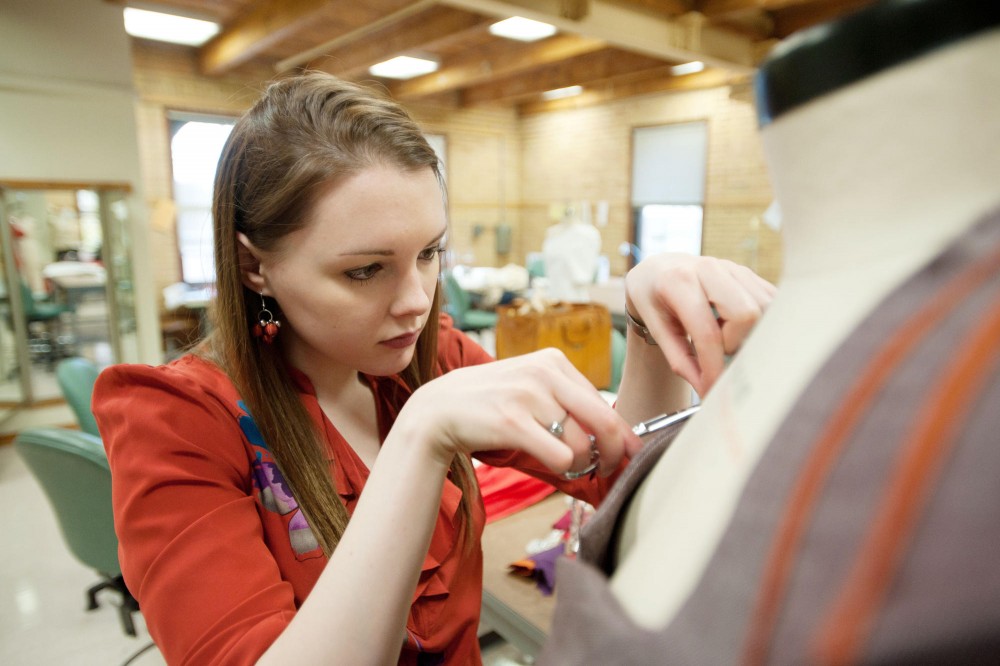 The University of Minnesota is lauded for many diverse and rigorous paths of study and research. It may come as a surprise (to some) to hear that one of the most prestigious programs offered has nothing to do with science whatsoever.

Rather, it has everything to do with capturing trends, tailoring jackets, sketching looks and fitting models. The plight of the apparel design student may seem mostly glamorous but itâÄôs not as simple as just âÄúmaking clothes.âÄù ItâÄôs also an extensive amount of meticulous work all building up to the one evening in their senior year when they present an entire line of clothing to a packed auditorium.

âÄúEvery year is different,âÄù program director Elizabeth Bye said. âÄúThe overall theme of each apparel design class changes year to year but what stays the same is their commitment to clothing design and their commitment to each other as a class, as a team.âÄù

With only 12 students (all female) making up the class of 2012, itâÄôs hard not to understand how the students would form a unit. The apparel design program operates on an extremely strict schedule. Once accepted, students are committing to four years of loaded schedules with the same small group of students.

This connection isnâÄôt singular to the seniors working on their final show, either. ItâÄôs evident even among the younger grades.

âÄúIâÄôve become pretty close with my fellow design students,âÄù sophomore apparel design student Chloe Ahlf said. âÄúWhen you do the kinds of work we do together âÄî all those late nights in studio âÄî itâÄôs kind of impossible to not form a bond.âÄù

The work the students must complete spans across a wide spectrum of design-related material. In addition to mastering the skill of sewing and piecing together garments, they must study history, textiles and costuming, along with merchandising and corporate work.

âÄúWe definitely prime the students to prepare for corporate design work,âÄù Bye said. âÄúThatâÄôs where most of the apparel design jobs are.âÄù

Granted the nearby location of Target headquarters, the turnout of corporate design jobs for the company is very high and University apparel design grads snag jobs within the company nearly every year.

But until the reality of finding a âÄúreal worldâÄù job in the hyper competitive realm of clothing design is upon the students, they remain focused on completing day-to-day tasks, like Project Runway-esque studio challenges (e.g. making clothes with nontraditional materials or designing to a theme). Other time is spent planning, producing and promoting their senior show.

This yearâÄôs production marks a definite shift from the edgy, avant-garde tendencies of the 2011 fashion masterminds behind âÄúDistortion.âÄù The title this year is âÄúTwelve,âÄù which is also the amount of graduates in the apparel design program.

âÄúWe debated so long about the theme but then decided that itâÄôs meant to be somewhat ambiguous,âÄù senior apparel design student Lizzie Hillman said. âÄúThere were a few more rocker girls last year, but this year weâÄôre focused on clothing thatâÄôs classic and elegant. There will definitely be some girls pushing the boundaries of particular styles, though.âÄù

The class of 2012 also aims to up the production value of the event, hoping to hold the level of professionalism to the gold standard of New York. The work that goes into crafting the show is undoubtedly intense, but with this small group of committed, eager young artists, itâÄôs hard to imagine that their efforts will yield anything less than impressive results.