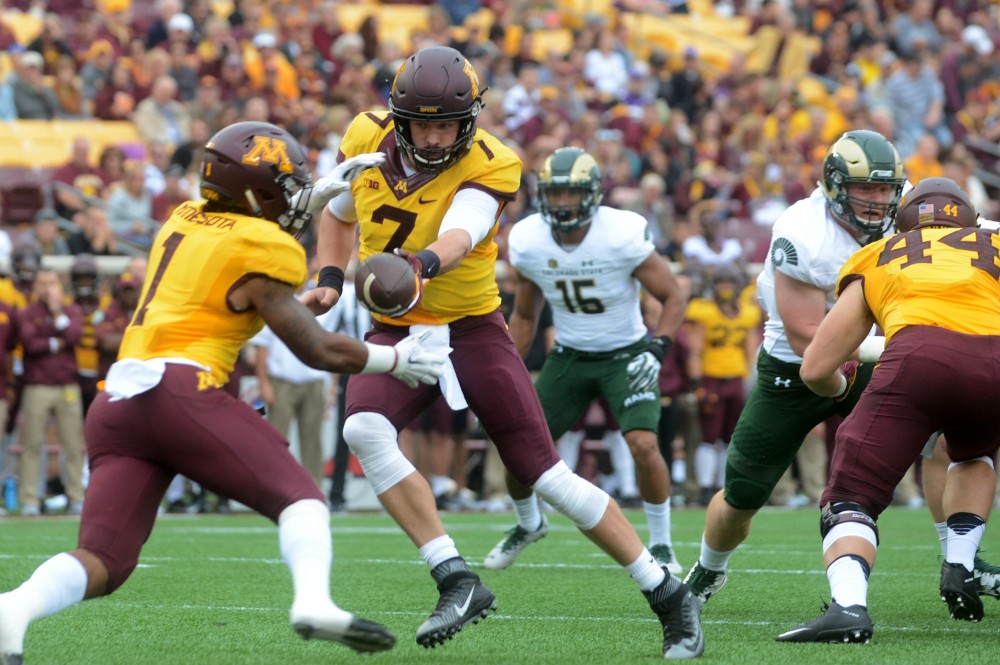 Gophers quarterback Mitch Lender hands the ball off to running back Rodney Smith on Saturday, Sept. 24, 2016 at TCF Bank Stadium.

The Minnesota Daily recently talked to Steve Palazzolo, a senior analyst at Pro Football Focus — a football analytics site — and asked him questions about Minnesota’s veteran quarterback Mitch Leidner, who has been a key part of the Gophers undefeated start.

MD: What is your overall assessment of Mitch Leidner this season?

SP: I just think he’s taking care of the football much better. I know the system has helped. I think its simplified things for him.

My big concern with him last year, was I think he’s got a good arm, he can make some big time throws down the field but he also would misread coverage quite a bit. He threw a lot of, what we call, ‘turnover-worthy plays’ — passes that should be intercepted whether they are or not. I think Leidner’s a guy that needed to take care of the football a little bit more and I think he’s doing a much better job of that this year. At the same time, I think it’s taken away some of those big time throws down the field.

I think he’s just had a similar passing game. He hasn’t had to throw the ball a lot but from just a pure passing standpoint, he’s improved. He’s improved enough to keep Minnesota in games. He’s just done a nice job of running that offense which takes advantage of his running ability quite a bit.

MD: How much of Leidner’s improved play can you attribute to Minnesota’s easy schedule?

SP: It’s definitely a factor. Just from our grading, [the Indiana State game] was his best. But I was impressed with everything around it. I thought he played really well against Colorado State. He was a little up and down against Oregon State but last weekend was an impressive game as a runner [and] as a passer.

Look, I didn’t have high hopes for him coming into the season when compared to some of the other assessments I’ve heard of him being a first-round prospect. I don’t believe he’s in that first-round mix or anything like that but he’s impressed me enough to watch closer. I am interested to see what happens once the Big Ten schedule gets a little bit more difficult but overall I think it’s been a good start for him and I think it’s been a great start for Minnesota and that defense.

MD: What do you think Leidner still has to work on?

SP: It’s probably the same stuff that I mentioned as far as taking care of the football, even though he’s done it well to this point. I want to see that against better defenses, against tighter defenses. That ability to throw the ball in the intermediate and deep level with that accuracy, but also just get through the season with a season full of good decision making and better accuracy. I think the accuracy is a big deal and again, his decision making and avoiding those backbreaking interceptions and turnover worthy plays are going to be crucial.

MD: You said back in June to Saturday Tradition that Leidner was “late-round type of guy” for the 2017 NFL draft. Has that changed?

SP: I don’t think it’s changed yet. I’m not going to make grand conclusions after three weeks. I’d say he’s taking steps in the right direction. I still want to see more but that’s still where I say he is for me. [He’s a] late-round looking type of player. I’m just interested to see what happens in Big Ten play and if he can keep it up.