The Gophers will have the sixth seed in the upcoming Big Ten tournament. 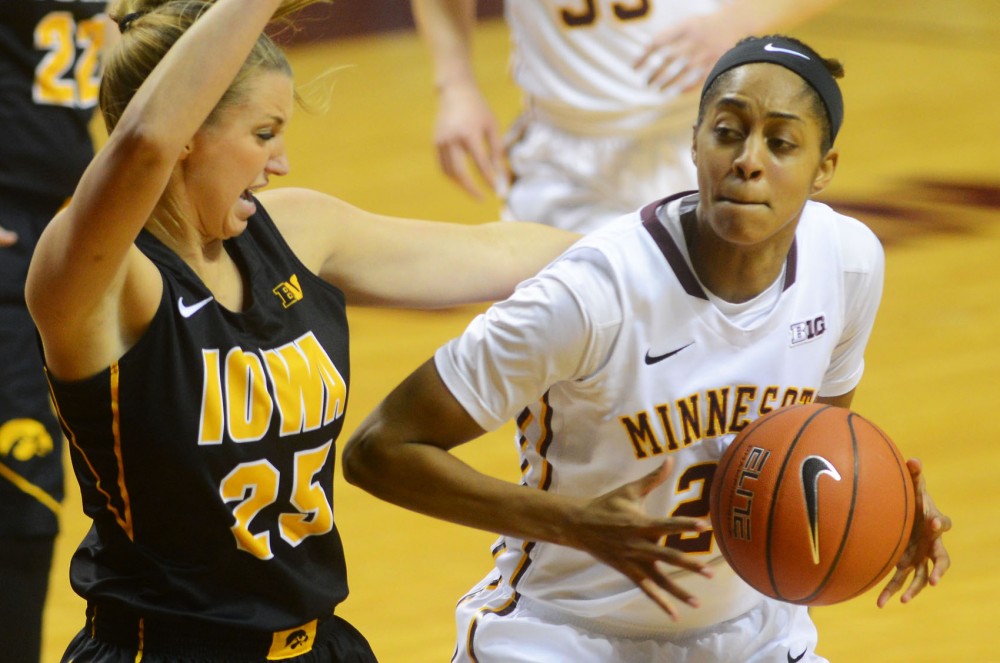 Forward Shae Kelley holds on to the ball against the Hawkeyes on Feb 17 at Williams Arena.

Shae Kelley has been vocal all season about her goal of making it to the NCAA tournament.

In her collegiate career — which includes stops at three different schools — the senior forward has never made it to the big dance.

Throughout the season, head coach Marlene Stollings has said Kelley is playing with a sense of urgency to achieve that goal. During Sunday’s 92-76 loss against Iowa, Kelley’s urgency was on display.

Kelley finished the first half with 14 points and seven rebounds, but at times in the game her aggressive mindset got her into trouble — four of the Gophers’ 10 first-half turnovers came from the senior.

The Hawkeyes converted the first-half turnovers into 14 points.

Kelley finished with eight turnovers in the game, but she helped the Gophers keep the score close with 29 points.

Not only was Kelley playing with a sense of urgency to get to the NCAA tournament, but the Gophers were also fighting for seeding in the Big Ten tournament.

With Sunday’s loss, the Gophers hold the No. 6 seed in the upcoming Big Ten tournament.

Coming into the game, both teams were in position to be within the top four seeds, placing added importance on the contest.

Stollings said the game was a hard-fought one for Iowa.

“They’re home. It’s senior day. They haven’t lost a game here all year. We knew they were going to come out with a lot of energy,” Stollings told reporters after the game.

Earlier in the season, redshirt sophomore center Amanda Zahui B. said she would try to do anything she could to help the team win.

The last time the two teams met she did just that, helping Minnesota pull off a 93-80 victory and setting a Big Ten record with 29 rebounds.

Although she wasn’t able to break her record, the center had yet another 20-20 game, finishing the contest with 22 points and 21
rebounds.

Only Kelley and Zahui B. reached double-digit scoring, but Kelley said it’s important for more players to step up during big games.

“We have great shooters on our team, and sometimes your shot just isn’t going to fall. We just need to try to do the other things,” Kelley told reporters after the game.

Zahui B. entered the weekend leading the conference in blocked shots, and she added to that total on Sunday. She finished with all seven of the Gophers’ blocks.

Her defensive presence was felt, but the one-woman defensive show couldn’t contain the Iowa shooters.

Iowa shot 46.5 percent from the field including 56.5 from behind the arc.

“We knew it was important that we were going to hold them to under eight [3-pointers]. When we give up 13, that’s going to be a long night for us,” Stollings told reporters after the game.