Letters will keep us together

“Brenda, My Darling” is more than the trail left by randy pen pals – it’s a poetic portrait of undying sexual and intellectual infatuation. 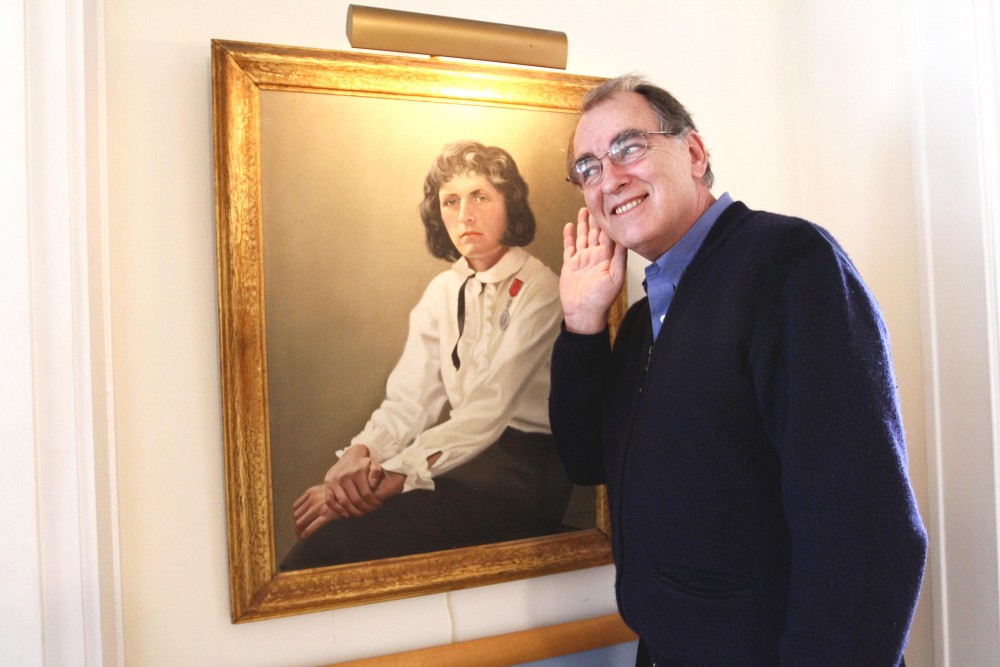 Eric Utne, founder of Utne Reader Magazine, recently published a book titled "Brenda, My Darling: The Love Letters of Fridtjof Nansen to Brenda Ueland." A painting of Brenda Ueland, Utne's step-grandmother, hangs on a wall in his home in South Minneapolis.

What: Eric Utne presents “Brenda, My Darling: The Love Letters of Fridtjof Nansen to Brenda Ueland”

They belonged together, but circumstances kept Brenda Ueland and Fridtjof Nansen apart âÄì”circumstances” being that they were both married, they were 30 years apart in age, and they lived on two different sides of the Atlantic Ocean.

If anyone could have razed these obstacles to the ground, it was these two, whose love has been chronicled by Eric Utne, Ueland’s step-grandson.

Brenda Ueland of Minneapolis was a noted feminist and rule-breaker who published an estimated 6 million words âÄî some of which formed her bestselling book, “If You Want to Write.”

And Nansen was (and still is) Norway’s pride and joy, a folk hero through and through âÄî in his icy expeditions, he came closer to reaching the North Pole than anyone had before. He went on to win the 1922 Nobel Peace Prize for his humanitarian work âÄî he saved millions of starving Russians by admonishing Western countries for holding anti-communist concerns above moral instincts. It was no surprise when he was invited to be the king of Norway. He declined the offer, but helped his country by enlisting Prince Carl of Denmark for the position.

Our star-crossed dynamos did overcome the odds, in a way. They met in the U.S. in 1929 when Nansen was 67. They spent less than a week together. But then they kept up a torrid, long-distance love affair in the year leading up to Nansen’s death.

“If I could pour out my passion for you on paper, you might get really frightened,” Nansen wrote to Ueland on June 3, 1929.

In her autobiography, “Me,” Ueland wrote that “it was a sort of dream love affair, a literary one. We never really believed we would see each other (again). And yet I know my letters were comforting and exciting to him. I can tell from his.”

Not only did Ueland spend hours and hours polishing her letters until they were perfectly vibrant, the two never had to deal with the less-than-glamorous trappings of daily life.

“They got to present themselves the way they wanted to be and aspired to be,” said Utne, who became Ueland’s step-grandson when he was 13.

“She was that evil woman who stole my grandfather,” Utne said.

Years later, Utne and Ueland bonded when they both lived in the Linden Hills neighborhood of Minneapolis, often sharing Manhattans and conversation.

“She was the most encouraging person I ever met. She could make you feel brilliant,” Utne said.

Utne, known as the founder of the Utne Reader, put together “Brenda, My Darling” in 2011, which coincided with celebrations of Nansen’s 150th anniversary in Norway.

The nonfiction book is a semblance of their relationship âÄî Utne framed letters sent from Nansen with photographs and excerpts from Ueland’s diaries, books, articles and speeches. All of the letters Ueland sent are missing.

There is a record of hands being squeezed, dinners being shared and visits being made âÄî but because their subsequent letters were filled with the flowery language of love and not expository retellings of their time together, we don’t know if their love was ever consummated.

We do know for certain that they felt an animal attraction and intellectual compatibility. They were both highly sexual beings âÄî the letters suggest that Ueland had love affairs (abbreviated “l.a.” by Nansen) with both men and women. And Nansen, in spite of his age and developing health issues, was fearlessly putting the “sex” in sexagenarian âÄî not only did he send Ueland self-taken nude photographs, he also sent her a drawing he made of a naked woman jumping through the sky, arms outstretched, (the caption: “âÄ¦ of course I thought of you when I drew it.”)

We can nibble on that morsel while we watch Nansen become vulnerable with his younger love, often signing off as “your boy” and “Viking.” With soft attentiveness, the pen pals soothed each other&undefined;s darker pains.

“Each of them had a private tendency to tumble into their own darkness. He wanted to be away from everybody âÄ¦ And she was incredibly self-critical,” Utne said.

What a reader really takes away from “Brenda, My Darling” is a new lens through which to view these larger-than-life icons.

Utne decided to publish the letters because he doesn’t buy into the notion that it will detract from their dignity âÄî rather, the letters will allow people to see Ueland and Nansen as the humans they were, desires and all.