On the brink of a PTSD breakthrough

New research may change how post-traumatic stress disorder is diagnosed. 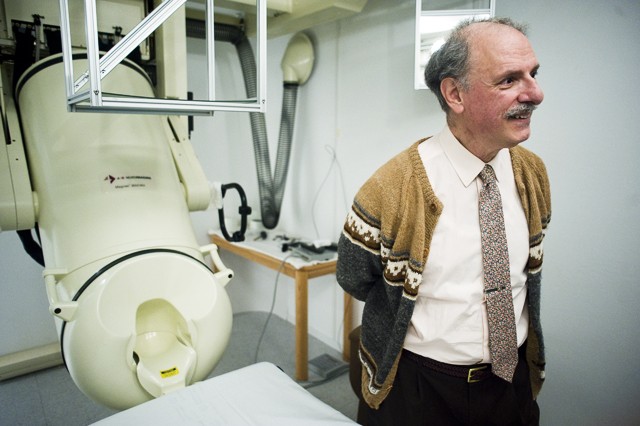 It started shortly after Gary Lobe returned from serving in the Vietnam War in 1968. He had constant nightmares. He would dive to the floor at any loud noise. He could never sit with his back turned to people. It wasnâÄôt until he watched television footage of the First Gulf War years later that his symptoms got out of hand. âÄúIt just brought back the war memories in fine detail,âÄù he said. âÄúIt really started interfering with everything that I was doing.âÄù For Lobe, now a 62-year-old ski instructor, post-traumatic stress disorder has been a major struggle. Recently, however, he participated in a study that may have dramatic implications for him and others who suffer from the disorder. Researchers from the University of Minnesota and the Minneapolis VA Medical Center may have discovered an objective method of identifying post-traumatic stress disorder (PTSD) in patients, an ailment that until now had no known biological marker. âÄúYou question your character, your ability to cope. Am I reacting to this in the wrong way? Is there something wrong with me?âÄù Lobe said. âÄúItâÄôs reassuring to know that itâÄôs not just you, that there is a difference in brain function because of that trauma.âÄù Using an imaging technique called MEG that measures magnetic fields in the brain, the study found unique patterns of brain signal communication in people with PTSD when compared to those without the disorder. This method of identifying PTSD is unique in that it doesnâÄôt require that the traumatic memories be provoked in the patient; the MEG merely observes the brain for about a minute, said Brian Engdahl, one of the leaders of the study. The results of the study may begin to reduce the stigma associated with PTSD, Engdahl, who has worked with PTSD sufferers since 1979, said. âÄúIn a roundabout way, this for many has been a relief,âÄù said Engdahl, a faculty member in the Brain Sciences Center at the Minneapolis VA Medical Center and a University clinical associate professor of psychology. âÄúThere it is; itâÄôs real. ItâÄôs not just in my head.âÄù Using the MEG to observe neural interactions in the brain, PTSD seems to appear as an area above the ear on the right side of the brain where there is persistent miscommunication to other areas of the brain, Engdahl said. The MEG test may also have the ability to determine the severity of the disorder, monitor its progression and evaluate the effects of psychological and drug treatment, said Apostolos Georgopoulos, a co-leader of the study and a director of the Brain Sciences Center. âÄúItâÄôs like an X-ray looking at the brainâÄôs patterns of communication,âÄù he said. While the study raises important questions, the data is preliminary and must be replicated by additional careful studies, said Dean Kilpatrick, director of the National Crime Victims Research and Treatment Center at the Medical University of South Carolina. âÄúItâÄôs an area where thereâÄôs not been a lot of progress, so when you find something that is positive, it obviously is hopeful,âÄù he said. âÄúBut I would say based on the results of this study, we still have a long way to go before we can definitively say we have a biomarker for PTSD itself.âÄù With about 92 percent accuracy, the researchers were able to identify PTSD in a group of 74 U.S. veterans âÄî 69 men and five women âÄî when compared with 250 control subjects with clean mental health. The veterans had served in various wars, including World War II, Iraq, Afghanistan and more than half in Vietnam. The next step is to continue the test using more participants to cover possible variability in the disorder among subjects, Georgopoulos said. While he said he believes the studyâÄôs sample size was sufficient, observing the MEG on even more subjects will increase the certainty of the findings. The hope is also to continue the study by recruiting a variety of veterans, including those with and without PTSD, as well as those with other disorders, such as depression and alcohol abuse, Engdahl said. âÄúPTSD is always mentioned first, but depression, drug and alcohol abuse, those are problems that we need to study as well and see how they blend with or are separable from this primary PTSD finding,âÄù he said. Due to PTSDâÄôs high rate of co-morbidity with other mental disorders, the test would need to be able to not only distinguish between those who have PTSD and those who do not, but also between people who have PTSD and other psychiatric disorders, Kilpatrick said. If the results gain steam, Georgopoulos said he expects to see more MEG machines in hospitals around the country. âÄúMuch like in the early âÄô80s, the MRI was unknown,âÄù he said. âÄúIt took a couple years to be accepted, but now every hospital has one.âÄù This research, funded by the U.S. Department of Veterans Affairs, follows a 2007 report by Georgopoulos and his colleagues on using MEG to diagnose other complex brain diseases such as AlzheimerâÄôs disease, multiple sclerosis, schizophrenia and chronic alcoholism. When the American Psychiatric Association first added PTSD to the Diagnostic and Statistical Manual of Mental Disorders in 1980, Engdahl used formal sleep studies to monitor the disorder but didnâÄôt find conclusive results. In the 1990s, he began using positron emission topography scans, which continue to yield mixed results. For Lobe, the results of this study may help the world recognize that PTSD is a real disorder. âÄúItâÄôs not made up, itâÄôs not because a character flaw or anything else,âÄù he said. âÄúItâÄôs because of the experience itself and what that experience did to the brain.âÄù