JonnyPops is changing the world, one frozen treat at a time. 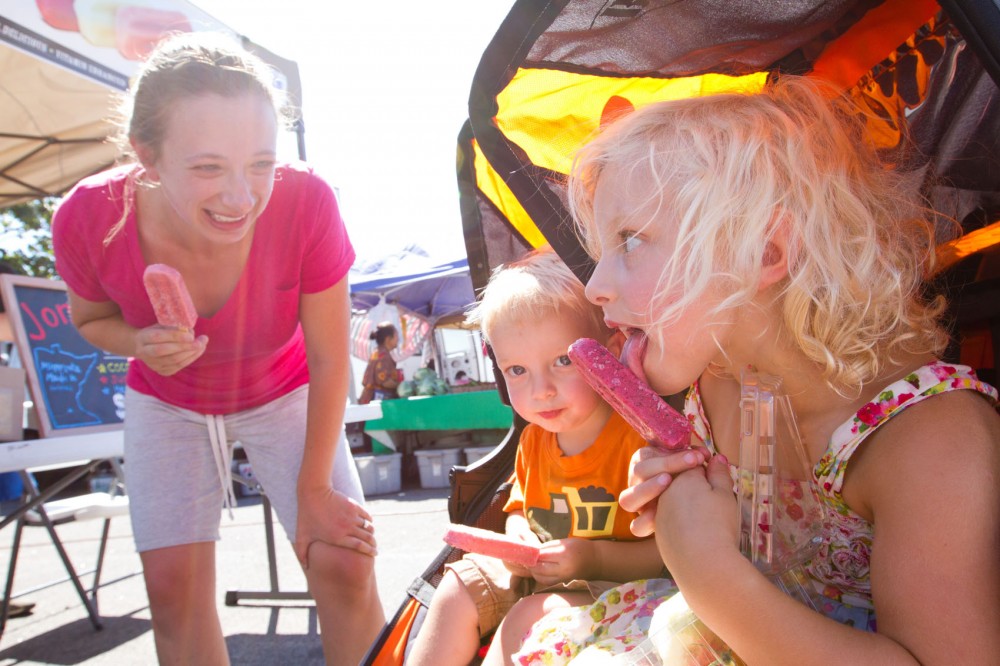 Grace and Jacob Rolek eat JonnyPops merry mountain berry popsicles with their mother, Emily, on Tuesday at the Midtown Farmers Market. JonnyPops was founded in 2011 by five college students and specializes in gourmet popsicles.

Successful entrepreneurs don’t usually start their businesses in college dorm rooms, but for the founders of JonnyPops, that was the only option.

Five business-savvy sophomores, four from St. Olaf College and one from the University of Wisconsin- Madison, founded JonnyPops in 2011.

The company now has 20 employees and is serving gourmet popsicles in 25 locations across Minnesota.

Personal ties drive the company’s founders. Chief founder Erik Brust named the company in memory of his cousin Jonathan Jeffrey. When Brust was visiting Jeffrey at Duke University in 2007, the two were throwing around business plans, and Jeffrey proposed the idea of a gourmet popsicle company.

Sadly, Jeffrey passed away due to drug addiction before he could see his idea materialize. To honor the memory of his cousin, Brust called the company JonnyPops — Jeffrey’s childhood nickname. In addition, a portion of the company’s profits are donated to the addiction treatment center where Jeffrey sought help — the Hazelden Foundation.

Brust cited the taste of the product as the main contributor to success of the company. JonnyPops are made from local fresh produce, contain no artificial ingredients and include vitamin boosts.

“It all ties back to the social mission … being addiction free, drug free, that whole all-natural feeling,” Brust said.

The company’s plans for the future include bringing their gourmet frozen bars to college campuses. They believe many addiction-related problems stem from the college scene and hope that their company can raise awareness about these issues.

“It’s very valuable not only as a product, but as a story,” Brust said.

The growing business has not encountered much difficulty branching out, despite the founders’ lack of professional experience. What began as five young men, a blender and an idea is now a booming company. JonnyPops booths are set up at many metro and suburban farmers markets. Big Bell ice cream trucks and several cafes and delis also carry the pops.

This young company’s founder is modest about its success.

“I don’t think we’re edging out people because of our skills over them,” Brust said.

Giving credit to professional chefs and family members that helped the company get on their feet, he said, “We’re a bunch of college kids trying to make a thing work.”