Both teams exit Big Tens in first round

The women’s and men’s teams lost 4-1 in their only duals of the tournament. 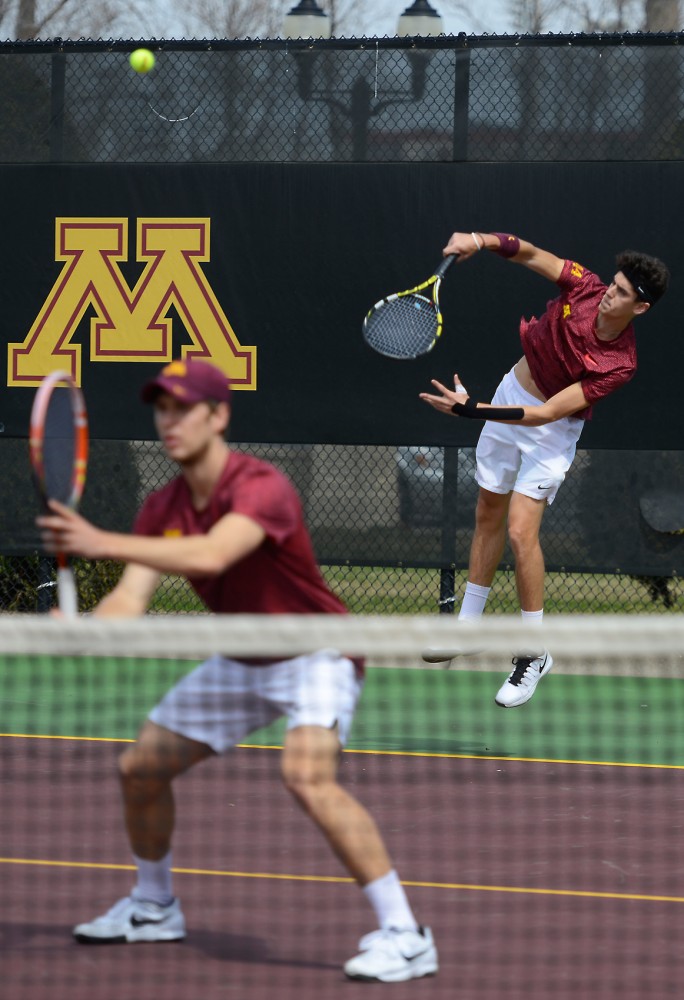 Sophomore Felix Corwin competes against Michigan State in a doubles match at the Baseline Tennis Center on April 10.

by Jack White
The Gophers men’s tennis team ended its season in the first round of the Big Ten Tournament on Thursday with a 4-1 loss to Purdue at the Baseline Tennis Center.
Minnesota won two conference duals this year after earning a share of the Big Ten regular season title in 2015.
Minnesota’s one point came from its doubles play. The Gophers were victorious in the No. 1 and No. 3 spots to take a 1-0 lead.
“It was a good doubles [competition], I thought,” head coach Geoff Young said. “Our No. 2 team played a really good team, and the other team was better. But one and three, where we won, I thought we served and returned well.”
The Boilermakers dominated singles play with four consecutive victories to take the dual and end the Gophers’ season.
Women’s team loses in round one
The women’s tennis team also lost in the first round of the Big Ten Tournament.
Wisconsin defeated the Gophers 4-1 in East Lansing, Mich., to snap Minnesota’s six-dual winning streak over the Badgers.
Redshirt senior Julia Courter was injured and couldn’t play in the dual, which forced the team to make adjustments. Junior Maja Vujic played in her first singles match since Feb. 20 in the dual, and freshman Camila Vargas Gomez played in her first doubles match since Jan. 17.
“We had to turn our lineup in on Monday, so we couldn’t really jumble our doubles. We couldn’t really move things around,” head coach Chuck Merzbacher said. “[Vargas Gomez] … did a good job playing in the No. 1 [doubles spot]. We just kind of had to make shifts in the doubles after [Courter] was out.”
The Gophers didn’t win a doubles match and conceded the first point of the dual. The team also lost the first two singles matches.
Freshman Annemarie Emme earned the team’s lone singles victory in the No. 3 spot, but the team had another singles defeat to lose the dual 4-1.
Minnesota ended the season 13-12 overall and 5-7 in the Big Ten.
“It’s not like we didn’t accomplish some things. We just want to do a little bit more,” Merzbacher said. “We’ve got some young kids coming in, freshman coming in. I think the future’s bright. … I’m excited for next year and glad we were able to get some stuff done this year.”
Delete Image
Align Left
Align Center
Align Right
Align Left
Align Center
Delete Heading