Ashley Wittman led Minnesota to a four-set win over Northwestern. 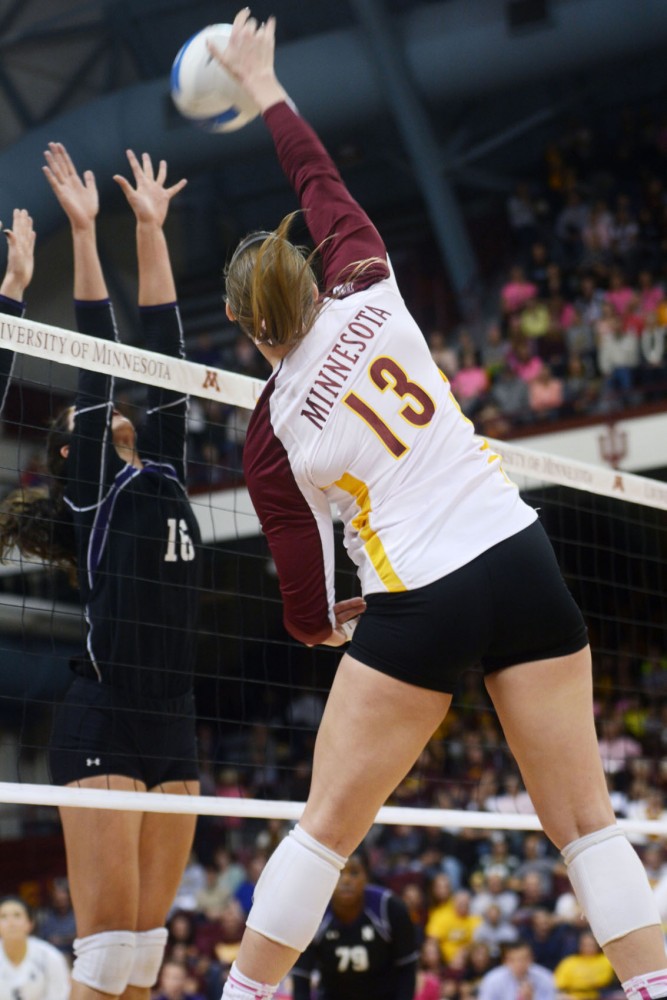 Minnesota outside hitter Ashley Wittman spikes the ball against Northwestern on Sunday at the Sports Pavilion.

Minnesota dominated every aspect of the match, boasting 17 team blocks, digging 80 balls and combining for a .291 percent hitting percentage.

“I’ve been trying to get better at defense and better at reading the game,” she said. “I’m just trying to do the best for the team, keep myself steady and do what they need me to do.”

The Gophers opened the match with a 25-16 set win over the Wildcats, putting on a show for the more than 4,000 attendees.

That dominance continued into the second set as the Gophers once again won in convincing fashion.

But in set three, the Wildcats woke up.

They opened the set with four consecutive points and befuddled Minnesota en route to a set win. The Gophers tried to claw back in the set but came up short.

It was a different story in the fourth set, though, as the Gophers pulled away at just the right time and won four of the last five points to end the match.

“The most important thing for us was that we showed some nice resiliency, fighting back from a deficit to get close in the third,” head coach Hugh McCutcheon said. “Then battling in the fourth to ultimately get to 20-all and take it from there.”

“In practice we battle, and that’s what we did today,” Santana said. “We keep going ’till the end, and I think that was the key to the game.”

Junior outside hitter Adrianna Nora was also instrumental in the match. She was second in kills on the team with 15.

Nora said she’s feeling much more comfortable with her role on the team than she was earlier in the season.

The Gophers have a four-day break before heading on a two-match road trip, where they will face Purdue on Friday and Indiana on Saturday.