Minnesota falls to Illinois in final game of regular season

The Gophers got on the board first, then allowed three consecutive goals. 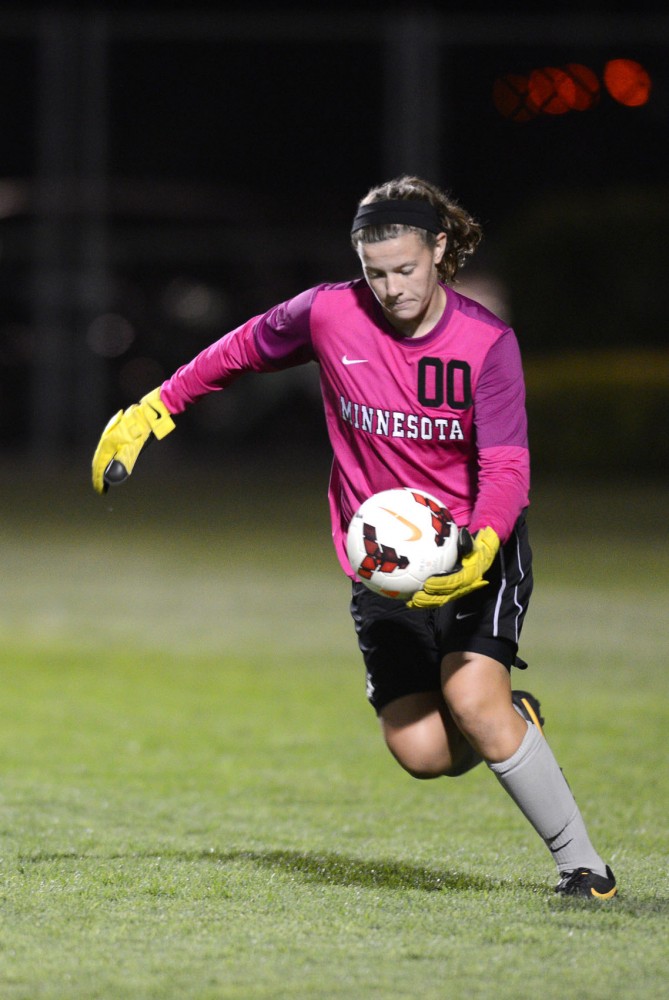 Minnesota goalkeeper Tarah Hobbs sets up for a kick against Louisiana State on Friday, Sept. 6, 2013, at Elizabeth Lyle Robbie Stadium.

Illinois’ three-goal spurt in eight minutes of the second half doomed the Gophers to a 3-1 loss in the final game of the regular season.

The first half of Thursday’s game featured chances for both teams, but none of those chances came to fruition, and the teams went into the locker room in a scoreless tie.

Sophomore forward Haley Helverson put the Gophers on the board first with a goal in the 54th minute.

But redshirt junior forward Jannelle Flaws, the Big Ten’s leading goal scorer, responded in the 69th minute to knot the game up at 1-1.

The Gophers committed an own goal in the 77th minute, just a minute after an Illini goal from freshman defender Casey Conine.

That made it 3-1, and Minnesota never caught up. The Gophers were outshot 15-5.

Freshman keeper Tarah Hobbs tried to keep her team in it with six saves in the contest, but it wasn’t enough.

The loss put Minnesota’s Big Ten tournament hopes in danger for a moment, but Ohio State lost to Michigan on Saturday night, and Minnesota clinched its spot.

The Gophers earned the No. 8 seed and will take on top-seeded Nebraska on Wednesday at 4:30 p.m. in Champaign, Ill. They lost to the Cornhuskers 1-0 on Oct. 20 but outshot Nebraska 20-16 in that game.

Minnesota head coach Stefanie Golan was not available for comment after the loss to Illinois.