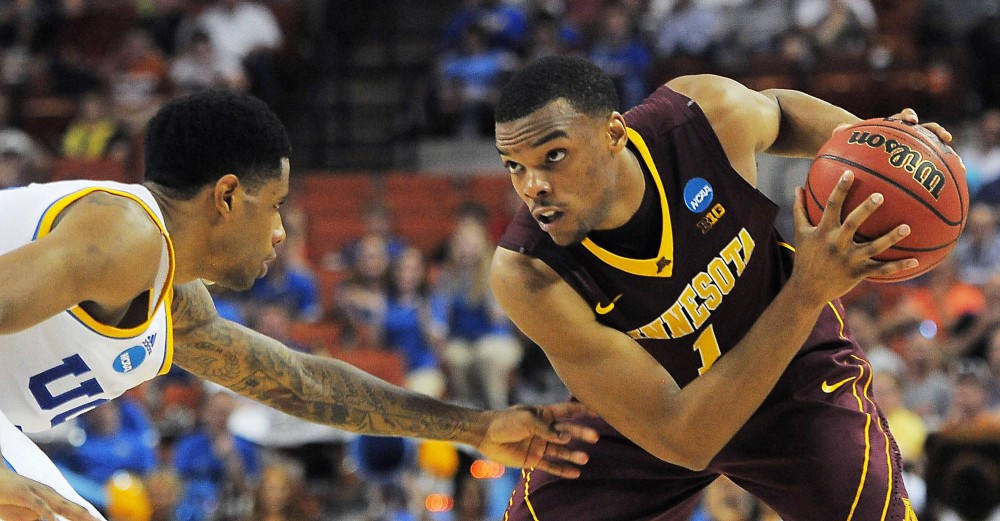 Minnesota guard Andre Hollins looks for an opening against a UCLA defender Friday, March 22, 2013, at the Frank Erwin Center in Austin, Texas.

About seven weeks ago, the Gophers were 0-5 in conference play, and Andre Hollins was taking most of the blame for the team’s slow start.

The senior guard slumped in a big way, shooting 12-for-58 from the field in the Big Ten losses.

But the sharpshooter found his stroke when Rutgers came to town Jan. 17, making 11-of-18 shots en route to 31 points and Minnesota’s first conference victory.

Now facing the Scarlet Knights in the first round of the Big Ten tournament on Wednesday in Chicago, the Gophers and Hollins will try to right the ship against Rutgers yet again.

“We’ll have to see what we’re made of,” Hollins said after Minnesota’s most recent loss to Penn State. “We’ve been tested like this before.”

Throughout Hollins’ four-year career with the Gophers, they have occasionally exceeded expectations when faced with late-season tests.

During his sophomore season, Minnesota had an unlikely upset over No. 1 Indiana that resulted in hundreds of fans storming the court in celebration, as it solidified an NCAA tournament berth.

The next season, after Tubby Smith was fired, an inexperienced head coach led the Gophers to a successful season, despite the team’s half-full roster of spare parts.

Now, coming off their second defeat of the season to Penn State — and having lost five of their last six with Hollins being unimpressive — do the Gophers have any surprises left?

“I hope so,” head coach Richard Pitino said in reply on Sunday after the loss. “I don’t feel like it right now, obviously because they’re down, but that’s [the coaches’] job to get them going by Wednesday.”

For the first 10 minutes of Minnesota’s most recent loss, it certainly looked like the oft-smiling Hollins had some magic left. He hit back-to-back-to-back 3-pointers in 1:09 to give the Gophers a 13-12 lead. Less than two minutes later, he confidently pulled up in traffic and shot a deep midrange jumper for his fourth made shot in a row.

But Hollins didn’t score in the second half, and Minnesota lost at the last moment in what Pitino called a “fitting” ending, considering how the season played out.

“There was one possession there. I don’t know what [Hollins] was doing,” Pitino said after the game. “I tried to calm him down.”

Entering the conference tournament, nothing is certain, considering how the Gophers have been up and down throughout this year. They beat solid Iowa and Michigan State teams on the road, but also lost to Northwestern and Penn State on their own floor.

But Minnesota should defeat Rutgers (10-21, 2-16 Big Ten) on Wednesday. If that happens, the Gophers would play winnable games against Ohio State and Michigan State in the next two rounds — setting up a potential semifinal contest with No. 8 Maryland before a potential championship game appearance.

Winning the Big Ten tournament is highly unlikely for Minnesota, given the way it has played lately. But Hollins’ Gophers have overachieved before.

Something surprising could happen again.

“This is a potential NCAA [tournament] berth if we can win five games,” Hollins said. “We have to really band together.”