Review: The Cass McCombs Band at the 7th Street Entry

The Cass McCombs Band lulled the crowd into an emotional stupor. 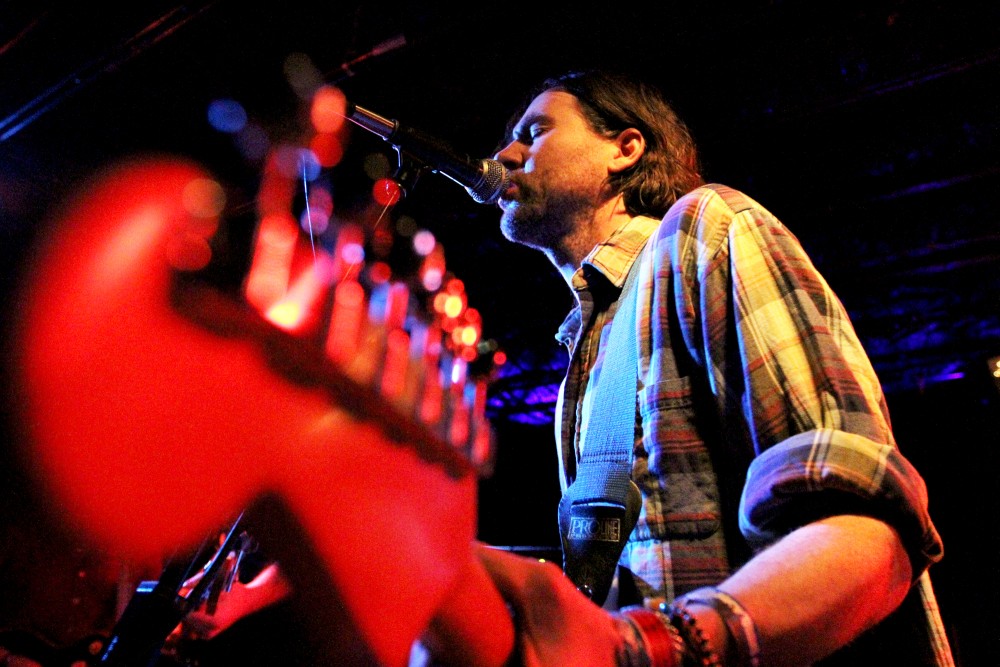 Cass McCombs is a quiet guy. Last night at the 7th Street Entry, he only spoke a few times. He told the audience to come a little closer to the stage, but “not too close.” He made two requests for dimmer lights. And he humbly introduced his band.

At one point, McCombs turned his back to us. Facing his on-stage mates, he crooned into the mic out of the corner of his mouth.

It fits âÄìMcCombs has never been one for menial conversation. He rarely tolerates the press, and when he does, he’s reticent at best. But if we’re living in a world where privacy has to be explained or earned, McCombs has done it by staying productive. In 2011 alone, he answered questions galore by releasing two full-length albums âÄî “Wit’s End” in April and “Humor Risk” in November.

And considering that his liner notes are basically chapbooks, a shallow slew of interviews with every rag in the country might cheapen the experience of seeing it all unfold live.

Back in May of 2011, the Los Angeles Times managed to get a one-page letter out of McCombs. He dismissed music as fluff and wrote that “Lyrics are my racket.”

McCombs’ skill as a lyricist eclipses any guitar prowess he may possess, and certainly any showmanship. His persona and his output invite comparisons to all the great sad white dudes âÄìEdgar Allen Poe, Leonard Cohen, Elliot Smith âÄìcomparisons that, bless McCombs’heart, are near impossible to live up to.

As he took a noble stab, audience members witnessed the man’s introspection. His voice has a way of sinking into the instrumentation. At the best of times, it’s soothing’ at the worst, it’s underwhelming. During his performance of, “Robin’s Egg Blue,” McCombs’ voice softly pounded along with the bass and drums.

If McCombs was slowing heart-rates and soothing hurt nerves, Frank Fairfield was the rootin’ tootin’ fiddler who sped up those RPMs in the first place.

McCombs’ opener went to town, Western-style. He fiddled so fast that hairs were coming off his bow and drops of sweat were dripping off of his walrus-style ‘stache. Yeehaw! Fairfield’s eyes were as distant as his mumbling vibrato. But with old-time charm, his set felt as homey as the porch he belongs on. One thoroughly sauced bluegrass fan was prompted to ask, “Is this an act?”

The most memorable moment of the night was when McCombs requested that the lights be dimmed again for a “special last number.”

The special last number, for which the brightest spot on the stage was a candle lit on top of an amp, was “County Line.” It was then that the Elliot Smith comparisons made the most sense âÄì it was McCombs at his truest and his saddest. He whimpered heart-sick falsetto into the slow darkness.

A snide ticket-holder might complain that the set lacked variety, and that every song was played at the same tempo and temperament. But that ticket-holder must have been in the bathroom during the performance of “Dreams Come True Girl.” It was another stand-out âÄìMcCombs and the Band took risks, jammin’ in the way that makes a heart jump. First, McCombs composed a solo from staccato jumps. Then the band ascended into a semi-atonal, blaring interlude of noise rock. It came to a head in a rhythmic pounding that could have been sincerely described as “intense as hell.” The band came out on the other side, exchanging smiles.

But for most of the night, McCombs drew the crowd into the quicksand of melancholic lyricism. There was no encore, and it didn’t seem like the crowd wanted one. Whether they were satisfied or simply emotionally drained is hard to tell âÄìin the case of a McCombs show, the two feelings may be one in the same.