Felix Corwin and Matic Spec went to tiebreakers and won their matches. 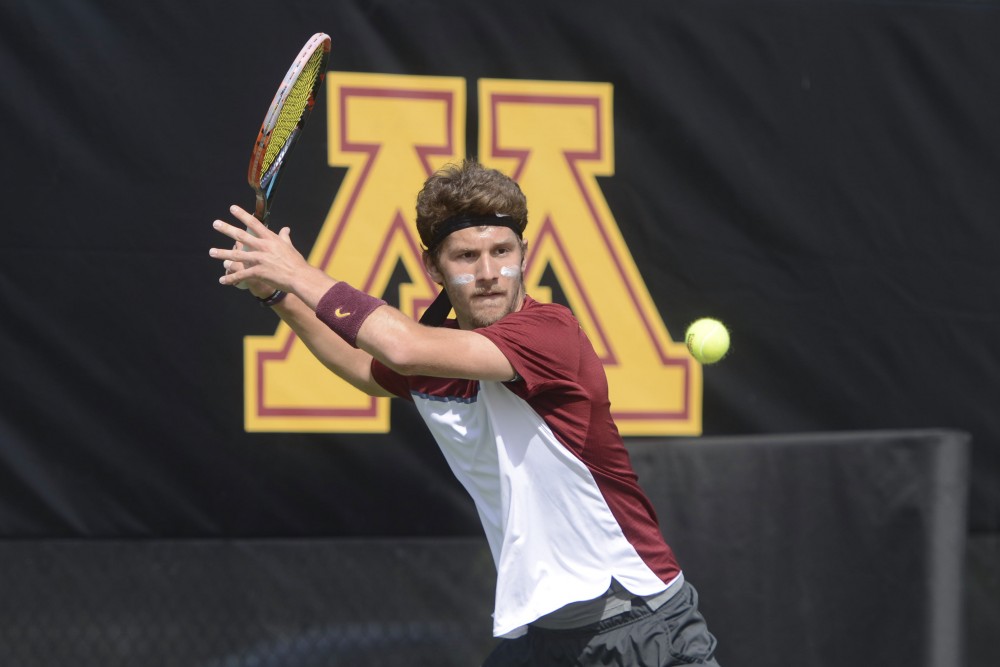 Stefan Milicevic returns the ball at the Baseline Tennis Center on Friday, April 21, 2017.

Minnesota’s regular season ended with splits on both sides.

The Gophers men’s team pulled off a win Sunday against Indiana 4-3 after a close loss against Purdue 4-3 Friday.

On a Sunday where the weather was nice, the sun was shining down on the Gophers — especially junior Felix Corwin.

The junior suffered a first set loss, then fell behind in the second set, only to force a tiebreaker.

He won the third set 6-3 and clinched the match victory for Minnesota.

Freshman Stefan Milicevic earned a point for the Gophers in singles play, sparking second looks from fans for his creative shots to keep him in the match.

The Gophers got off to a strong start in singles play Sunday, something that head coach Geoff Young emphasized was important after Friday’s loss.

The Gophers started off with a lead and gained the doubles point going into singles play.

While Corwin and fellow junior Matic Spec won their doubles match, Spec saved the heroics until his singles match.

Spec played to a tiebreaker Friday. This one came after a tied first set, as Spec was able to pull out the point, winning the set 7-6, then getting the point after a second set victory 6-4.

Another good match came from Milicevic Friday when he won his singles point in three sets.

“He’s trying to be more aggressive off his backhand side,” Young said. “It doesn’t come easy for him, so he’s really trying to do a better job with that, and also looking to come to the net more.”

The women’s team also split their matches over the weekend.

The Gophers lost Friday to Maryland and won Sunday against Rutgers.

Junior Caroline Ryba and sophomore Caitlyn Merzbacher were the only two players to earn a point in singles play, while the doubles point and the other four singles points fell to Maryland Friday.

The Gophers came back strong Sunday to win 6-1.

The Gophers women finished with a regular season record of 13-11 and the men finished 16-9.