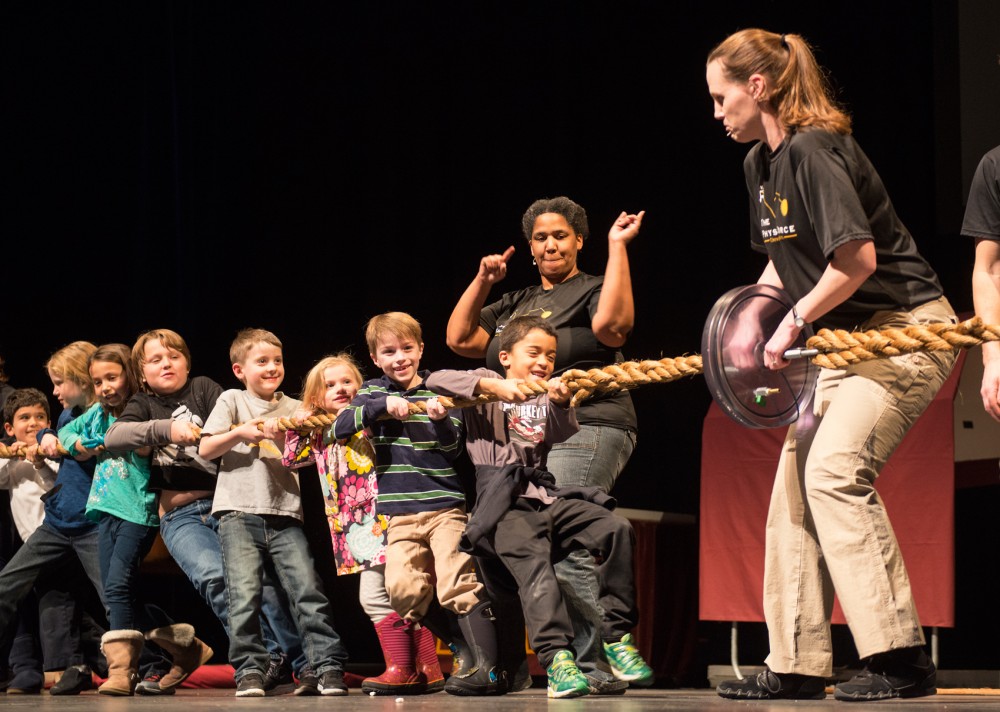 Children attempt to tug plates apart at the Physics Circus in Northrop Auditorium on Thursday. The event, hosted by the Physics Force, aimed to entertain and educate children through a variety of physical science performances.

by Keaton Schmitt
Teachers crunched 55-gallon barrels with atmospheric pressure and dropped a colleague from a magnetic winch 20 feet above Northrop’s stage last week to get children excited about science.
The University of Minnesota Physics Force, a group of current and former high school teachers and university
professors, hosted a science comedy show Thursday to help generate student interest in science fields. The same day, a NASA astronaut spoke at the Bell Museum of Natural History to spark similar interest about space.
The Northrop event was the group’s largest public show. The Physics Force members also perform smaller traveling shows for schools throughout Minnesota.
A group of high school teachers created the troupe in 1984 when the University gave them funding.
While the group’s efforts originally targeted high school students to boost interest in physics, its focus has shifted to elementary and middle school students, Hank Ryan, an original member of the group, said.
Before the change, the University’s physics department used the program to recruit those interested in science by speaking to them after shows, he said.
“We want to show kids that physics is interesting, understandable and fun. … We have reached thousands of people, and they don’t get tired of [the shows],” said Shaul Hanany, a University physics professor and Physics Force member.
A few buildings away from Northrop, NASA astronaut and Minnesota native, Josh Cassada, spoke at the Bell Museum about the importance of scientific curiosity.
“We explore for one reason, and that’s because we don’t know what we’re going to find. And that’s why we do the science we do,” Cassada said.
Earlier that day, Cassada spoke at his former high school in White Bear Lake, Minn., about the use of space science on Earth and his experience becoming an astronaut.
“This idea that there’s a cookie cutter approach to becoming an astronaut doesn’t really exist, which is great.” he said.
Cassada’s speech at the Bell Museum was part of the Museum’s scientific outreach efforts.
The museum has run an outreach program for more than nine years, where they’ve used a mobile planetarium to teach about 170,000 students, said Sally Brummel, the museum’s planetarium program manager.
“That’s really our main goal,” Brummel said. “To connect people with nature and the universe.”
Delete Image
Align Left
Align Center
Align Right
Align Left
Align Center
Delete Heading