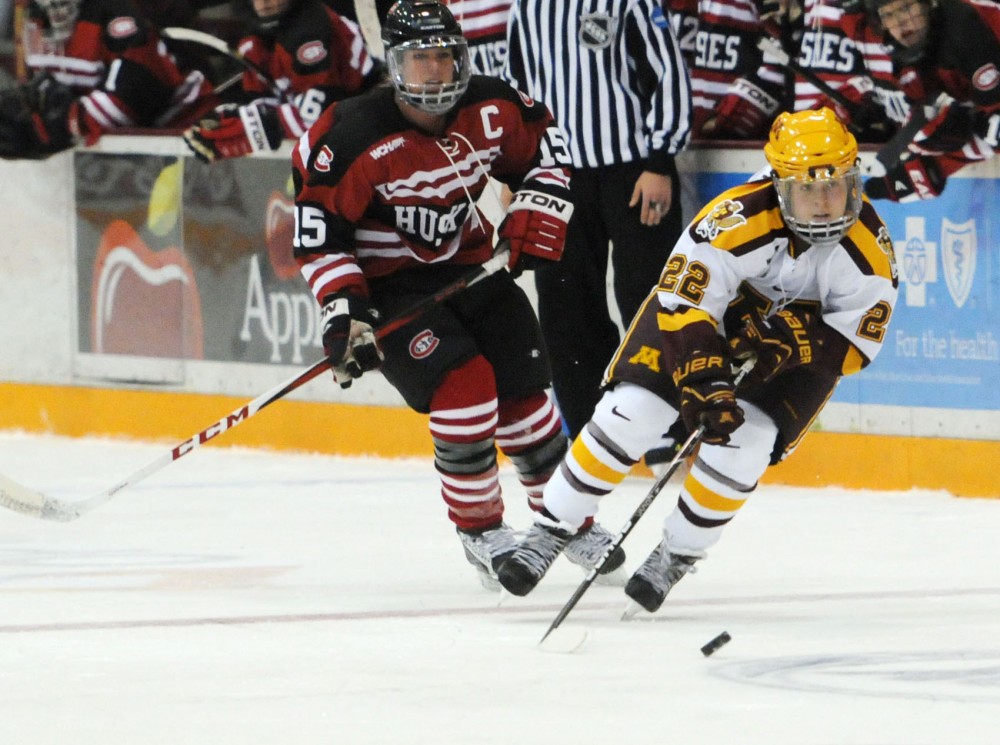 Minnesota won Friday’s game 5-0 and Saturday’s 6-0 against the Saints, who dropped out of national rankings last week.

They did so without having one of their top forwards, Amanda Kessel, for a majority of the second game.

Kessel was up against the boards when she grabbed the mask of a Saints’ skater and knocked the player’s helmet off.

She was given both a five-minute major penalty for “grasping the facemask” and a game misconduct penalty.

“There were a couple instances where the referees probably could have called penalties on our player as well as theirs, and that scrum probably would never have happened,” head coach Brad Frost said.

Frost said the ejection would not affect Kessel’s status for next weekend.

“It was a good opportunity for some kids who maybe don’t play as much to get some more ice time throughout the night,” he said.

Before the penalty Saturday, Kessel made her presence felt with three goals and two assists in the two games.

Hannah Brandt, one of Kessel’s linemates, said she thought the team adjusted well.

“We kept putting the pressure on, and it didn’t change too much, just different [line] combinations,” Brandt said.

Minnesota had three power plays after Kessel left and scored on one of them.

Forward Kelly Terry recorded her first goal of the season in the second period Saturday on the power play.

Terry is on Sarah Davis’ line, which, along with Becky Kortum’s line, carried big loads this weekend, Frost said. He said this is something they need going forward.

On Friday, even goaltender Noora RÃ¤ty recorded a point with an assist on defenseman Milica McMillen’s first collegiate goal .

RÃ¤ty was solid once again between the pipes and recorded 48 saves on the weekend.

Thirteen of those saves came while the team was on the penalty kill.

Brandt said she thought the defense was “outstanding this weekend, especially not giving up a goal to one of the better teams in the country.”

Minnesota’s opponents are 0-29 so far this season on the power play.

The Gophers used a few of St. Lawrence’s power plays for their own gain, as they scored three shorthanded goals on the
weekend.

Davis netted a shorthanded goal in the first period Friday, and Kessel and Brandt each had one
Saturday.

“Shorthanded goals are always fun to come by,” Davis said. “I think we took advantage of St. Lawrence’s offensive mind on the power play.”

Frost said he thought scoring in the first period “took some wind out of [St. Lawrence’s] sails.”

“Anytime you’re on the power play, you’re expecting to score especially in your own building early in the game,” Frost said. “If the other team, like us, is able to capitalize on a turnover and breakaway like Hannah [Brandt] did, it really does set the tone for the rest of the period.”

St. Lawrence was ranked No. 7 to begin the season but has since been swept twice.

Brandt said the Saints were a lot tougher and stronger than the Gophers’ past two opponents.

But that didn’t show in the box score.

“It was a great weekend for us. … To be able to shut them out two games in their [arena] was really special,” Frost said.