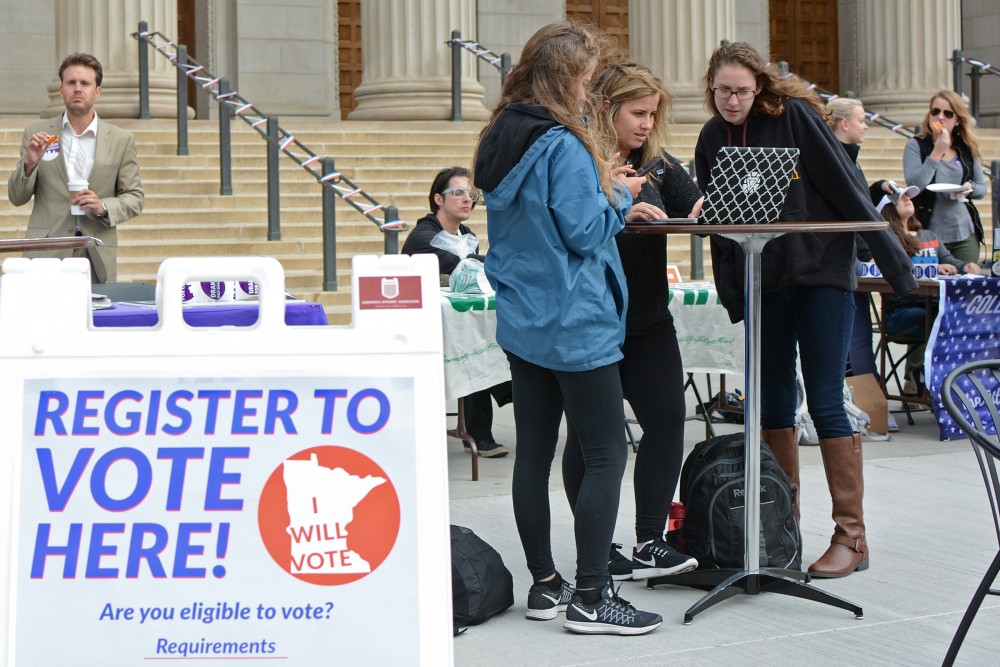 Strategic communications sophomores Maja Cave, left, and Marisa White, center, register to vote with the online software TurboVote with help from MSA member Cara Nix, right, at Voterpalooza hosted by MSA on Tuesday, Sept 27, 2016 at Northrop Plaza. MSA decided to use TurboVote this year to increase student registration on campus for the upcoming election.

To combat low student turnout during elections, this fall University of Minnesota student groups are using new and old platforms to encourage voter registration on campus.

While some political student groups, such as College Democrats, plan on door-knocking and ‘dorm-storming’ to register voters, the Minnesota Student Association is promoting the use of a new online registration system called TurboVote.

“We knew that one of the big hurdles with students is getting them to actually vote, and anything that we could do to make it simpler would probably be a good thing for us and for students,” Dammann said.

Students, faculty and staff from Minnesota — and other states that allow online registration — can use TurboVote to register, Dammann said. Those who are unable to register online are guided through their state’s process. The site also provides information about every race a student can vote on in their district, he said.

Additionally, Dammann said if users request an absentee ballot through TurboVote, they will receive a printed ballot with a pre-stamped, pre-addressed return envelope, and TurboVote will send users regular reminders about the election.

Junior sociology student Katie Bassett is from Illinois but will be voting in the Minnesota elections. She registered using TurboVote on Tuesday and was able to request an absentee ballot right away which she said had been a hassle in the past.

Members of MSA learned about the system — and its relative success in boosting voter registration among students — at a Big Ten student government conference, Dammann said.

“When we go to the state house to lobby, it makes it so much easier to get state funds anytime we can show that … we’re active participants in the political process,” she said.

MSA partnered with University Government and Community Relations to launch the site on the Twin Cities campus. The system cost $4,000, Dammann said, but Government Relations agreed to pay half and MSA picked up the rest.

“Students and others who will be voting will be helping elect the policymakers who will … ultimately set a lot of state funding … and federal funding that comes to the University,” he said.

MSA members hope TurboVote will help achieve their goal of increasing students’ political participation. The group used TurboVote to register students at its Voterpalooza Tuesday, and thus far about 1,000 new voters at the University have registered using the system, Dammann said.

“Our goal is to get students civically engaged,” he said. “Millennials aren’t voting, and it’s unfortunate because millennials could have a huge say in who gets elected.”

“I think there’s often a tendency to overestimate the impact that college students are going to have on an election,” he said.

Braxton Haake, College Democrats president, said college students could have a great impact on the election.

“College students, that demographic is kind of one of the great, untapped bases,” he said.

This year, MSA is encouraging students from Minnesota to vote in their home district rather than on campus.

“What happens typically in this area is you’ll have a Democrat who will win, and they’ll be very supportive of the University … but what we want is to put pressure on these outer-state representatives and senators,” Dammann said.

Candice Niven, a junior sociology of law, criminology and deviance major, registered to vote for the first time using the site during Voterpalooza on Tuesday.

“If I didn’t have this information, I would have thought [registering] was a long, complicated process,” she said. “This made it so fast and easy.”

As for what’s next, Dammann said MSA will be at Open Streets University of Minnesota this Saturday to encourage more students to register to vote.