The Colors of Survival 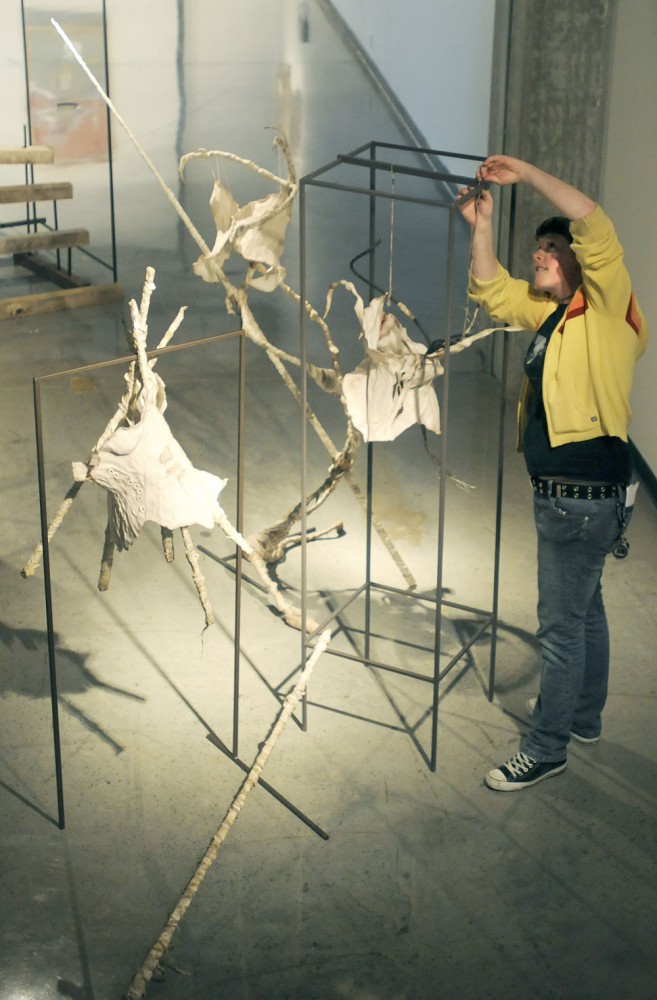 When Edith and Max Goodman, two Romanian survivors of the Holocaust, told their story to artist David Feinberg, they werenâÄôt expecting the type of questions he would come up with. âÄúWhat colors would you put to your experience?âÄù heâÄôd say. Feinberg would hold up traditionally happy hues and sad ones, and ask them, âÄúWhat feels right? Which reminds you of what happened?âÄù After they chose, Feinberg would have the Goodmans play a game of hot and cold as he moved around different shapes of color on a blank canvas. FeingbergâÄôs interviews with the Goodmans might seem like a strange way to make art âÄî or to tell a story, for that matter, but the associate professor in the University art department asks questions like these for a reason. As the director of the current exhibition at the Nash Gallery called âÄúVoice to Vision,âÄù part of his job is to extract memories that will bring the stories of genocide survivors to life. Back in 2000, Feinberg began the project with similar interviews with other Holocaust survivors. Later, he expanded his subject to include survivors from genocides in Rwanda, Laos, Tibet and Darfur. This yearâÄôs exhibition includes work from three other artists with similar themes. But getting the project started wasnâÄôt easy, and, according to Feinberg, it almost didnâÄôt happen at all. When he approached his first survivors, he was repeatedly turned down. Many had never told their story, and were not interested in doing so. For them, recounting their experiences was just as painful as living them. And when Feinberg explained the creative aspects of the project to them, the survivors had other problems. Feinberg remembers that âÄúwhatâÄôs this art thing all about?âÄù was a common reaction. âÄúIt was intimidating to them,âÄù he explains. It wasnâÄôt until a year-and-a-half after approaching the first survivors that they agreed to be part of the project, and that only happened because the survivors, with the nudging of family, realized that it would be healing for them to tell their story. After the first survivors agreed to help, others felt secure working on the project. When Feinberg interviews survivors, he prods for more than simple facts. âÄúWeâÄôre looking to create the essence of human experience,âÄù he says. âÄúWeâÄôre looking for forms that resonate with the inner feelings of the survivors.âÄù ThatâÄôs why he and other artists conduct rapid-fire question sessions about colors and shapes. HeâÄôs always looking for a symbol or an object that resonates. His goal is to take their first answer, their first association, and integrate that into the art. âÄúIâÄôm not good at drawing at all,âÄù Edith Goodman said, âÄúbut yet he made me draw an incident I remembered.âÄù The work created with Edith and Max Goodman looks eerie and abstract; down the side of one piece called âÄúLove Will Set You FreeâÄù there is a row of brown paint drops. Near the center is painted a mountain that they were forced to climb. On the left of the canvas is a black blanket-covered figure that Edith painted after remembering a woman who had died from over-exertion. In the top right-hand corner of the piece are two cheery turquoise shapes that stand out from their bleak backdrop; these represent Edith and Max today. The images drawn by the survivors are not created for the benefit of the viewer. Instead Feinberg and other artists working on the project have focused on what feels right to the survivors. What he and the other artists expect from the survivors is their emotional honesty, their ability to recreate memories and feelings. For Rwandan survivor Alice Tuza, working on the Voices exhibition became something more than an art project. âÄúIt was therapeutic,âÄù she said. Before working with Feinberg, she had only told her story to close friends. In addition to its healing merits, she says the project made her more creative, too. Instead of negatively dwelling on her experiences, she began creating art. When her project finished after a year-and-a-half of interviews and work, she decided to continue creating. Today, one of her own works sits on display at the gallery. Feinberg believes that the exhibition humanizes its subjects; instead of looking at the survivors as victims, we look to them as examples of how to survive. âÄúThese survivors,âÄù says Feinberg, âÄúshould be seen as heroes.âÄù