Students worked with Project for Pride in Living on Wednesday. 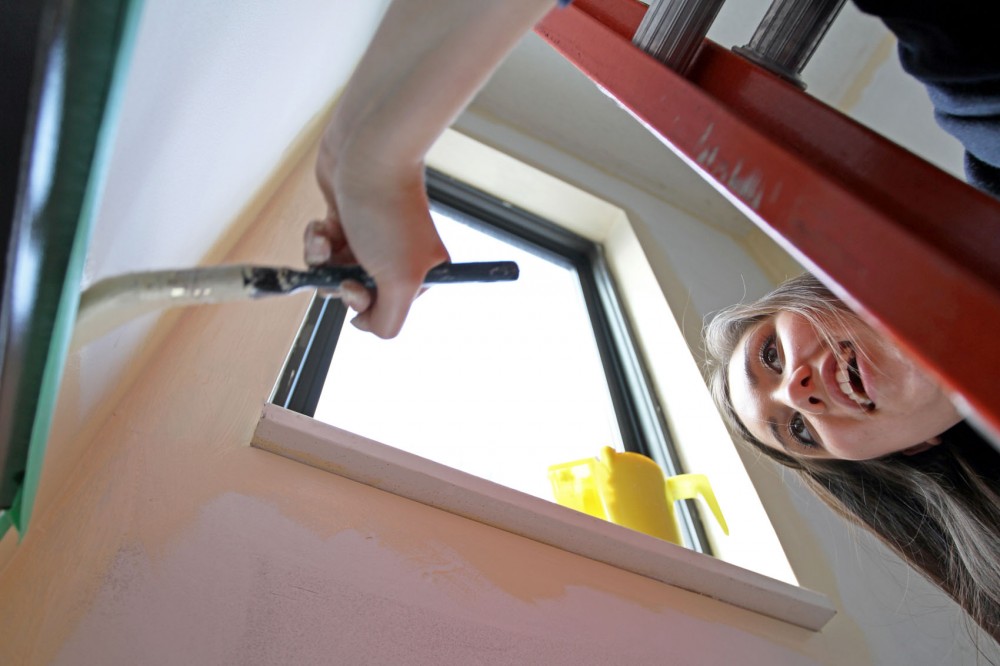 Simone Wai, a chapter core member of Students Today Leaders Forever, paints the interior of an apartment building in South Minneapolis on Wednesday. STLF partnered with Project for Pride in Living to

Butter-colored paint crusted over the fingers of three University of Minnesota students painting the walls of an apartment hallway.

On Wednesday afternoon, three members of the Students Today, Leaders Forever group coordinated with the Twin Cities-based Project for Pride in Living to restore a low-income housing unit in south Minneapolis.

University students founded STLF, a national organization, in 2003. For years it has partnered with nonprofit groups locally and nationally to fulfill its mission of revealing leadership qualities among its participants, said Simone Wai, a University junior and member.

But this is the first time STLF partnered with PPL — a community-based, nonprofit organization providing housing, employment training, family support and education to lower-income families.

“Since we’re stationed here, we try to do as much as we can here,” said University senior Robbie Anderson.

As students painted the halls, a 5-year-old resident watched shyly from the stairs. The building the volunteers were working on is a five-unit complex serving families. It sees a lot of wear and tear from the children, said Julie Huck, PPL volunteer program manager.

It’s also one of more than 1,000 affordable housing units owned by PPL in the Twin Cities.

Anderson said this is STLF’s first service project off-campus this semester, and the turnout was not as large as expected. But even with three volunteers, the group was able to finish its goal for the day of painting a hallway and a stairway.

“I have a free period, so if I can help somebody with it, I’m cool with that,” senior Ken Chong said as he crawled up a ladder to paint the trim by the ceiling.

The project was started by another group a week and a half ago but was left unfinished until STLF offered its services, said Laura Rescorla, the housing resource coach at PPL.

“I think it will be nice to have walls that don’t look like this,” Anderson said, pointing at walls blotchy with primer.

STLF has plans with other nonprofits in the area, like Feed My Starving Children. Members will also participate in the Polar Plunge and Relay for Life fundraisers, Wai said. But STLF’s main project is the Pay It Forward tour –– a service-based spring break trip through five cities.

“We like to give to our community,” Wai said.