Glendale Townhomes was one of four communities selected to hold a Walkable Community Workshop. 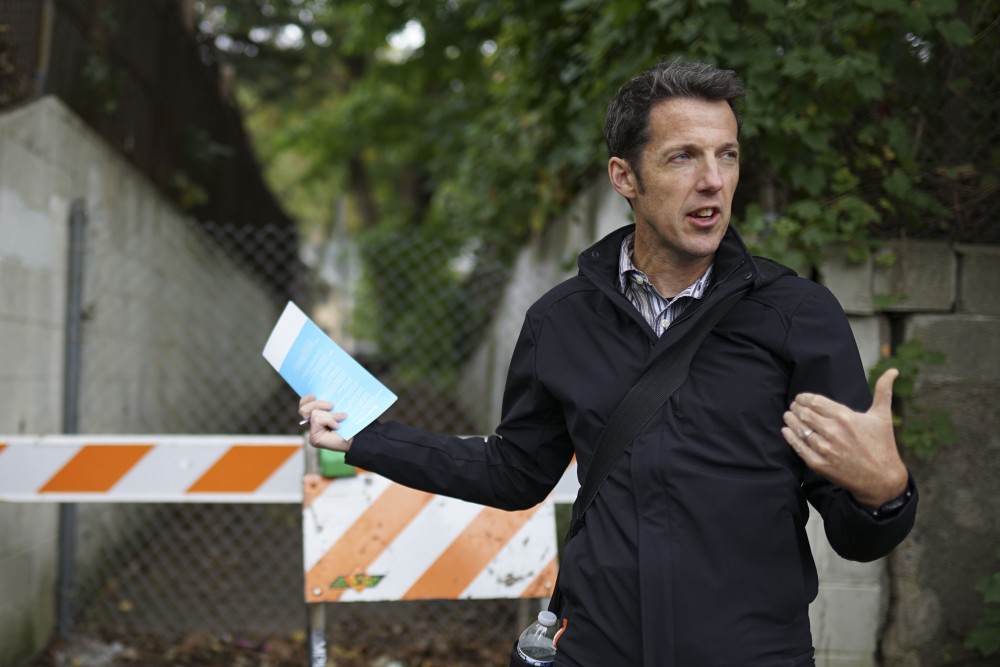 A pedestrian safety workshop in the Prospect Park neighborhood on Friday, Oct. 4.

The Walkable Community Workshop, hosted by the Minnesota Department of Health, addressed resident concerns about unsafe intersections and pathways throughout the community. The Glendale Townhomes was one of four communities across Minnesota selected to host a workshop. The community will also receive up to$5,000 from the Department of Health to implement safety improvements, which could include adding walkways and traffic signage.

The Minneapolis Public Housing Authority, which manages Glendale, and the Minneapolis Health Department applied to hold the workshop and secure the funding.

Glendale was selected because of its commitment to implementing pedestrian improvements, said Ellen Pillsbury, an active transportation coordinator at the Minnesota Department of Health who co-led the workshop.

“We were really looking at [the] community’s readiness and capacity to work on this once the workshop is over,” Pillsbury said. “The workshop is really a starting off point usually. It helps get people organized and excited, but then the real work happens … ”

Some residents attribute safety concerns to an increase in traffic brought on by new student apartments along Delaware Street SE. Current signage and other safety measures have not kept up with the area’s increasing density, said Ladan Yusuf, a Glendale resident and community organizer.

“We’re just here trying to make sure that we’re not taken over by cars and we can walk down the street without getting hit,” Ladan Yusuf said. “[The neighborhood] was low density and now it’s high density. So that has to be accommodated.”

Malik Yusuf, an assistant property manager at Glendale, said traffic poses a risk to young students who cross Delaware Street SE and other intersections daily to catch the school bus or walk to nearby schools.

“There isn’t something flashing telling vehicles, ‘hey, kids are crossing.’ There is no stop sign,” he said.

Residents also expressed concerns about a walkway, referred to as the Arthur-Williams cut through, which connects the Glendale Townhomes with Prospect Park. Currently the entrance is fenced off due to a crumbling retaining wall nearby. This creates a divide between Glendale and the rest of the neighborhood, said Ward 2 City Council member Cam Gordon.

“There’s a major barrier between public housing here in Prospect Park and the rest of the neighborhood,” Gordon said. “Generally a lot of people want to improve the connections and get rid of this barrier and [the] feeling that they’re separate neighborhoods from each other.”

The cut through provides a connection between the neighborhood and makes it easier and safer for Prospect Park residents to safely walk to Stadium Village and the University of Minnesota, said Evan Roberts, chair of the Prospect Park Association’s transportation and safety committee.

Moving forward, residents will work with the Minneapolis Public Housing Authority and the Minneapolis Health Department to implement the improvements using the funding. Despite the group’s relatively limited budget, small changes to the area’s current infrastructure can promote pedestrian safety and community connections, Roberts said.

“Where can we improve incrementally based on what’s already on the ground?” he said. “Small things can make a huge difference.”