Face to Face has donated $1,200 for surgeries to repair facial deformities. 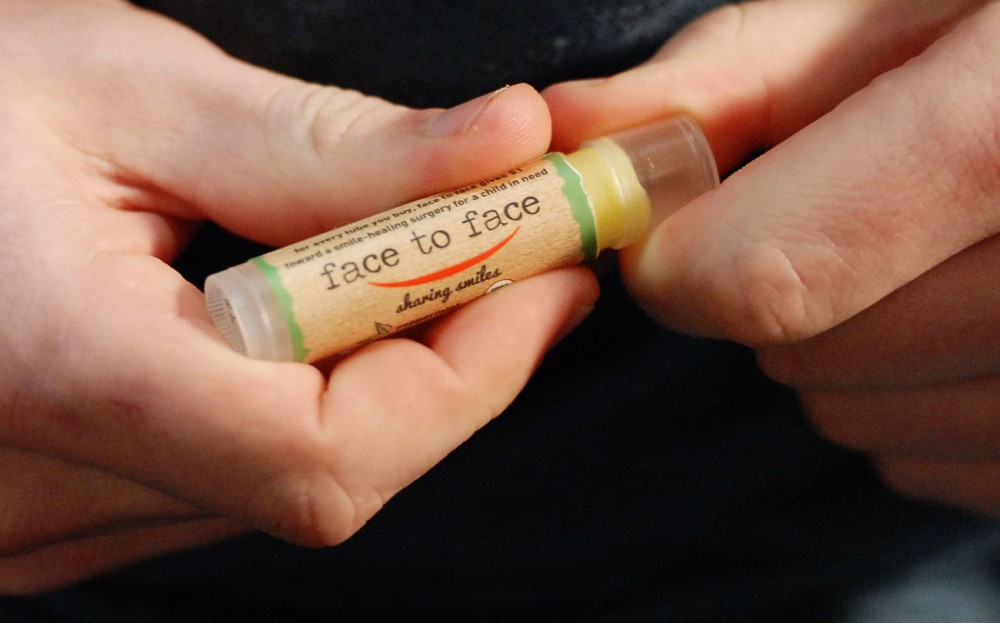 Two University alumni, Jimmy Ennen and Travis Brew, created a business called Face to Face selling lip balm and donating one dollar from each sale toward providing healthcare to children with facial deformities in Africa. The company started less than a year ago and it is currently being sold in University bookstores.

On an average Friday night in 2011, University of Minnesota alumni Travis Brew and Jimmy Ennen decided they were going to improve access to health care in developing countries.

They didn’t donate all of their money to a charity or buy plane tickets to see the problem firsthand — they made lip balm in their kitchen.

That first batch of balm has evolved into their business, Face to Face, which donates $1 for each tube of purchased lip balm to a charity that helps provide care for children in Ethiopia with conditions like cleft lip, cleft palate, nomas or tumors.

University students at any campus can purchase the lip balm at the bookstore, including Coffman Union’s.

In two months, Face to Face has raised $1,200 — enough to fund three surgeries that restore basic functions like eating, speaking and smiling.

Chris Tastad, the company’s vice president of operations, said although surgery’s price tag seems small in the U.S., its benefits in Ethiopia are immense.

The relatively inexpensive surgery can “ultimately have a large impact on the quality of life of a child,” he said.

Ennen said the inspiration for the late-night batch of lip balm came from his study abroad experience in rural Ecuador.

“While I was there I really realized providing people with health care is the greatest gift you can give another person,” he said. “I saw just how powerful that could be.”

That commitment to
service, Tastad said, drives the business.

“We make sure the idea of social good, not just in the interest of profit but in the genuine interest of impacting lives, is at the fore of what we do,” he said.

Face to Face is partners with Project Harar Ethiopia, which organizes the surgeries through Ethiopian hospitals.

“They’re not sending over surgeons from developed countries to developing countries and sort of maintaining this cyclical, dependent model,” Ennen said.

In the U.S., most children with facial deformities are treated, said Anna Thurmes, clinic coordinator at the University Amplatz Children’s Hospital’s Craniofacial Center.

Because of the multiple surgeries, speech therapy and orthodontic care are often necessary; repairing a cleft lip or palate can cost an American hundreds of thousands of dollars.

The challenges in Ethiopia, she said, are more than monetary.

“One of the major barriers in Africa right now is the financial cost and also just the distance most families have to travel to get the medical centers,” Thurmes said.

Left untreated, children could lose physical functions like speaking or eating, she said, which can impair hearing or other health.

“There’s a lot of myths that you just fix the lip and you fix the palate and it all works out, but there’s so much function that happens as you grow,” she said. “That’s where it’s really a lifelong treatment.”

And that treatment, at least when Face to Face is involved, now begins at an unusual source — lip balm.

“It’s a product that’s a very small part of people’s lives as a whole. When joined with this mission,” Tastad said, “it becomes much more significant.”

The team is also looking to launch new flavors and a tinted line in the next couple of months, Ennen said, and will eventually include other personal care products.

Stephanie Tomczyk, a business senior and friend of Ennen, said the idea of donating $1 for one lip balm is something she expects people will respond well toward.

“People don’t necessarily have as much discretional income,” she said. “So being able to purchase a product that not only they desire but that’s also doing good is sort of the best of both worlds.”

Support for facial reconstruction is often overlooked because the conditions it addresses aren’t fatal. To Brew, this makes the cause more worthy of giving toward.

“These deformities aren’t necessarily life-threatening,” he said. “But they are life-changing in an incredible way.”

And because the surgery, unlike food or clothing, never gets old or goes bad, the benefits of their work last.

“It’s not like we’re just giving them something and there’s an expiration date,” said Kevin Walker, vice president of sales. “This surgery sticks with them for the rest of their lives.”