Stacks on stacks of grain

Grain Stack, a 21st century cafeteria, is a welcome addition to the MIA. 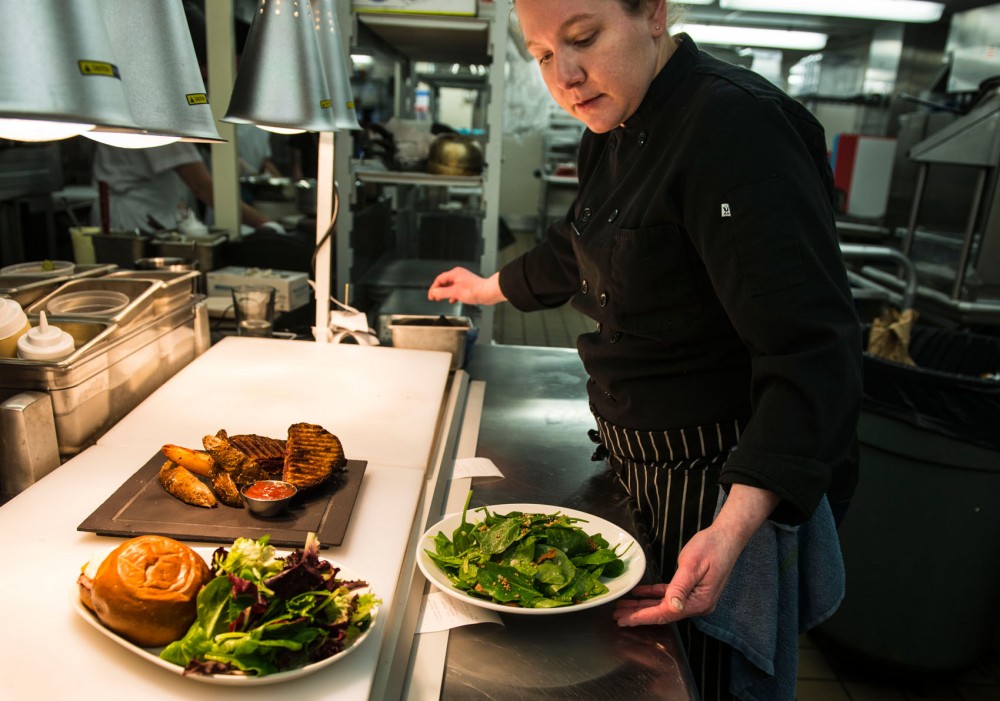 Cafeterias are associated with tepid food and industrial ambiance. They’re a safe haven for outdated lunch staples as diverse as undercooked penne, soggy chicken tenders and buffalo chicken wraps in green tortillas (an unfortunate holdover from the ’90s). To transform a cafeteria, it takes a team with not only culinary skills, but lots of chutzpah.

Minneapolis food conglomerate Stock & Badge, proprietors of Victory 44, Dogwood Coffee Co., Parka and Rustica, are just the team to take on this task. Enter Grain Stack, a minimalist cafeteria in the heart of the Minneapolis Institute of Arts. It not only blows the food of the former occupant out of the water (the ever-underwhelming D’Amico & Sons), but it successfully reimagines tried-and-true cafeteria favorites.

Grain Stack possesses the bustle and foot traffic of a cafeteria while maintaining a restaurant-like feel, thanks to the sleek, modernist white walls of the MIA’s third floor. Open for lunch only, it’s busiest on weekends, especially when A&E visited last Saturday.

“You caught us on a record day,” manager Stephanie Lemmer said in a brief free moment, while she pulled double duty bussing tables and ensuring the front and back of the house synced up.

The clientele is varied, from families to young lovers grabbing a bite after taking in the cafeteria’s namesake, a Claude Monet painting housed in the MIA.

What sets Grain Stack apart from other cafeterias is its limited menu. Gone are the copious entrees, salads and desserts — they’re replaced by a few well-done versions of each, carefully prepared by Chef Jen Farni.

Grain Stack’s salads are nearly enough for a full meal. Of the 10 or so selections, the simple spinach salad stood out. Grain Stack does away with spinach’s salad bar reputation by pairing it with creamy chevre, dried mushrooms and bee pollen. The aged balsamic vinegar was occasionally overpowering, but it did not detract from the overall composition of the salad.

The toughest task at Grain Stack is ordering an entrÃ©e. Mac and cheese gratin, beef tongue reuben and salmon pastrami pay homage to old-school deli favorites. The Perfect Burger, made famous at Victory 44, is the top seller, but the egg sandwich is the menu’s sleeper. It clinches the gold, complete with a perfectly fried egg, a toasted bun and honey-accented ham, which puts the McMuffin to shame.

Though five times more expensive than Ronald McDonald’s breakfast treat, the egg sandwich is also five times more satisfying. What pulls it together is a smattering of apple butter that tones down the egg and ham’s natural saltiness.

I immediately cringe whenever potato wedges appear on the menu, but Grain Stack gets them right. The wedges are large and crisp, not the typical soggy starchers. They’re lightly salted and served as both a side and a starter.

Where Grain Stack slacks is their service. Granted, it was their busiest day yet, but servers seemed stupefied by the influx of diners. Service was rushed and flustered at times, though it could also be congenial, prompt and willing to go above and beyond, signaling that it’s usually more polished.

Though I ordered potato wedges as my side with the egg sandwich, it came with a side salad instead. Thankfully, the error was noted quickly and corrected with no extra charge.

Grain Stack offers several desserts, but you can also head downstairs for coffee and a pastry at the ground floor outpost of Dogwood Coffee. Blink and you’ll miss it — it’s nestled in a small nook abutted by a short hallway.

According to barista Heather Feider, the MIA location features the first Modbar Espresso Module in Minnesota. The polished, stainless steel machine spans the length of the counter, featuring fine-tuned pump controls designed to craft only the finest espresso.

The coffee lives up to both Modbar’s billing and Dogwood’s reputation. The miel is a great afternoon drink, lightly frothy with a small jolt of caffeine and just the right amount of cream. It’s a dead ringer for the bittersweet chocolate cookie (made by Rustica as part of the Stock & Badge partnership). The cookie has two layers of dark chocolate — a chewy exterior and a gooey-yet-composed interior — and is sweeter than the name lets on.

With quality offerings, Grain Stack and Dogwood have re-established Stock & Badge’s credibility (their other restaurants, Parka and Victory 44, have experienced a roller-coaster ride of ups and downs this past year) and elevated museum dining from pathetic to noteworthy.